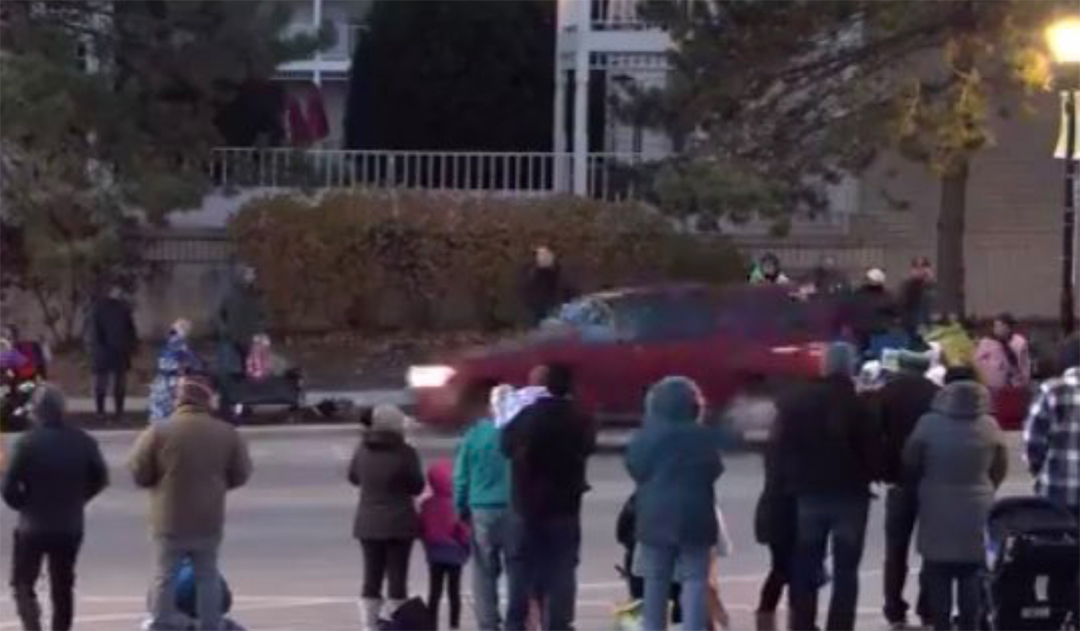 A screen shot from video posted by the City of Waukesha on Sunday after a red SUV ran through a Christmas parade, killing at least five people and injuring many more. (City of Waukesha via Twitter)

Prosecutors in Wisconsin have charged a man with intentional homicide in the deaths of five people who were killed when an SUV was driven into a Christmas parade.

He made his initial appearance in court Tuesday.

The city’s livestream video and bystander video captured the chaotic scene when an SUV sped along the parade route and then into the crowd. Authorities say 62 people were injured, including many children. Several remain in critical condition.

Brooks had been free on $1,000 bail for a case in Milwaukee County earlier in November in which he’s accused of intentionally striking a woman with his car. Prosecutors said they’re investigating their bail recommendation in that case, calling it inappropriately low.

THIS IS A BREAKING NEWS UPDATE. AP’s earlier story follows below.

The suspect in a Christmas parade crash in suburban Milwaukee that killed five people was due in court Tuesday where five homicide charges were expected to be filed, a crime that can carry the stiffest penalty possible under Wisconsin law — mandatory life in prison.

Other lesser charges were also expected to be filed against Darrell Brooks Jr. related to the roughly 50 additional people who were injured when an SUV barreled through the parade route at a high speed, sending people flying through the air.

Brooks was free on $1,000 bail posted just two days before the deadly event, a fact that is leading to a review of what happened and renewed calls for giving judges more power to set higher bails.

One pending case against Brooks included an allegation that he deliberately hit a woman with his car in early November after a fight. Prosecutors in Milwaukee County on Monday called their bail recommendation “inappropriately low” given the facts of that case and the Sunday crash, and said they would review it.

Julius Kim, a defense attorney and former assistant prosecutor, said the bail could easily have been set more than twice as high.

“He was accused of running over the mother of his kid, and to put it at $1,000 strikes me as low,” Kim said. “It could have been an inexperienced attorney who happened to be reviewing cases that day.”

Waukesha Police Chief Dan Thompson said Brooks, 39, was leaving the scene of a domestic dispute that had taken place just minutes earlier when he drove into the parade route.

Brooks has been charged with crimes more than a dozen times since 1999 and had two outstanding cases against him at the time of the parade disaster. That included resisting or obstructing an officer, reckless endangering, disorderly conduct, bail jumping and battery for the Nov. 2 incident.

Legal experts cautioned that one extreme case should not be a reason to push for higher bail amounts that would keep poorer defendants behind bars longer while they await trial.

“We don’t want to have a kneejerk reaction here and say ’Let’s lock up a lot of people pretrial,’” said John Gross, a law professor at the University of Wisconsin Law School and also the director of its Public Defender Project.

“I’m sure the district attorney’s office is going to look back at this and ask themselves, ‘Did we get this wrong?’” said Gross, the law school professor. “This is such an extreme incident … could they reasonably expect he would get behind a vehicle and run people down on a parade route? What would have alerted you to the capacity he would have had for this kind of violence?”

Some Republicans were quick to jump on the case as an example of a broken legal system.

Republican Rebecca Kleefisch, a former Wisconsin lieutenant governor who is running for governor in 2022, called the killings “yet another avoidable tragedy that occurred because a violent career criminal was allowed to walk free and terrorize our community.”

And Republican state Rep. Cindi Duchow said she was reintroducing a constitutional amendment that would change the bail process in Wisconsin to allow judges to consider a defendant’s danger to the community when setting bail. Judges currently are only allowed to consider the possibility that defendants might not show up for a court appearance when setting bail.

“He tried to run over his girlfriend with his car — that’s attempted murder,” Duchow said. “If you’re a danger to society, you should have to work hard to get out.”

Thompson, the police chief, said that there was no evidence the bloodshed Sunday was a terrorist attack or that Brooks knew anyone in the parade. Brooks acted alone, the chief said.

Brooks had left the site of the domestic disturbance before officers arrived, and was not being chased by police at the time of the crash, according to the chief, who gave no further details on the dispute.

NBC News published doorbell camera footage that appeared to capture Brooks’ arrest. It showed Brooks, shivering in just a T-shirt, knocking on a homeowner’s door and asking for help calling for a ride. Moments later, police surrounded the house and shouted, “Hands up!” Brooks, standing on the porch, held up his hands and said, “Whoa whoa whoa!”

Hundreds gathered at a downtown park Monday night in Waukesha, Wisconsin, for a candlelight vigil in honor of those lost and hurt. A pair of clergy solemnly read the names of those who died. Volunteers handed out sandwiches, hot chocolate and candles at the vigil, which was attended by interfaith leaders and elected officials.

“We are parents. We are neighbors. We are hurting. We are angry. We are sad. We are confused. We are thankful. We are all in this together. We are Waukesha Strong,” said a tearful Amanda Medina Roddy with the Waukesha school district.

Mayor Shawn Reilly described the parade as a “Norman Rockwell-type” event that “became a nightmare.”