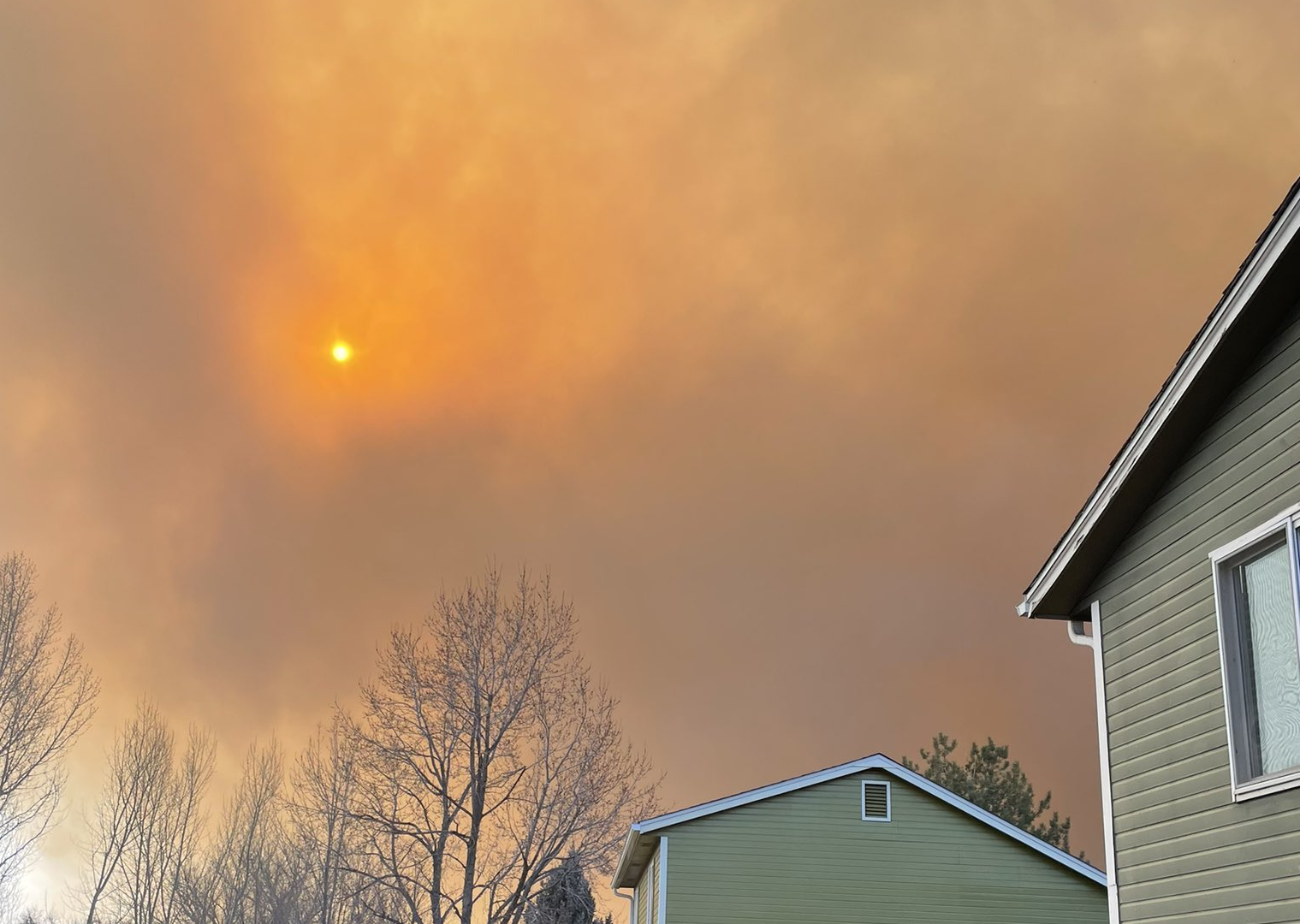 LOUISVILLE, Colo. (AP) — Search teams looked for two missing people on Sunday in the snow-covered but still smoldering debris from a massive Colorado wildfire, while people who barely escaped the flames sorted through what was left after the blaze and investigators tried to determine its cause.

The flames ripped through at least 9.4 square miles (24 square kilometers) and left nearly 1,000 homes and other buildings destroyed in suburbs between Denver and Boulder. It came unusually late in the year following an extremely dry fall and amid a winter nearly devoid of snow. Experts say those conditions, along with high winds, helped the fire spread.

In hard-hit Louisville, Susan Hill walked her dog in the well-below freezing chill Sunday morning down a snowy street. She choked up as she remembered three days ago seeing the sky change color from the hill where she used to watch fireworks — and then the nervous sprint out of town with her college-age son and the dog, cat and the fire box with birth certificates and other documents.

The flames stopped about 100 yards (90 meters) from her property, and she slept Saturday night in her home using a space heater and hot water bottles to stay warm since her natural gas service had not been turned back on.

In the burned-out neighborhood near Hill’s home, a U.S. Mail carrier checked the still-standing brick and stone boxes for outgoing mail. The fire came so quickly people might have put bills or other letters in there, and she didn’t want someone to steal them.

While homes that burned to the foundations were still smoldering in some places, the blaze was no longer considered an immediate threat — especially with Saturday’s snow and frigid temperatures.

“A day late and a dollar short,” Hill said of snow, which scientists said typically prevents winter fires that spread in dry grass.

“I know this is a hard time in your life if you’ve lost everything or you don’t even know what you lost,” Polis said after the tour. “A few days ago you were celebrating Christmas at home and hanging your stockings and now home and hearth have been destroyed.”

The cause of the fire is still under investigation. Utility officials found no downed power lines around where the fire broke out.

Boulder County Sheriff Joe Pelle said Saturday authorities were pursuing a number of tips and had executed a search warrant at “one particular location.” He declined to give details.

Authorities initially said everyone was accounted for after the fire. But Boulder County spokesperson Jennifer Churchill said the reports of three people missing were later discovered amid the scramble to manage the emergency. One was found alive, officials said Sunday.

The search for the other two missing people was complicated by still burning debris and the snow,.

Of at least 991 buildings destroyed by the fire, most were homes. But the blaze also burned through eight businesses at a shopping center in Louisville, including a nail salon and a Subway restaurant. In neighboring Superior, 12 businesses were damaged, including a Target, Chuck E. Cheese, Tesla dealership, a hotel and the town hall.

The two towns are about 20 miles (30 kilometers) northwest of Denver with a combined population of 34,000.

Utility crews expected to get most electricity restored to the homes still standing Sunday, but warned gas service might take longer to get back.

People lined up to get donated space heaters, bottled water and blankets at Red Cross shelters. Xcel Energy urged other residents to use fireplaces and wood stoves to stay warm and keep their pipes at home from freezing.

Superior resident Jeff Markley arrived in his truck to pick up a heater. He said he felt lucky to be “just displaced” since his home is intact.

“We’re making do, staying with friends, and upbeat for the new year. Gotta be better than this last one,” Markley said.

This story has been updated to correct the wording in the quote from Gov. Polis.

The Associated Press receives support from the Walton Family Foundation for coverage of water and environmental policy. The AP is solely responsible for all content. For all of AP’s environmental coverage, visit https://apnews.com/hub/environment.