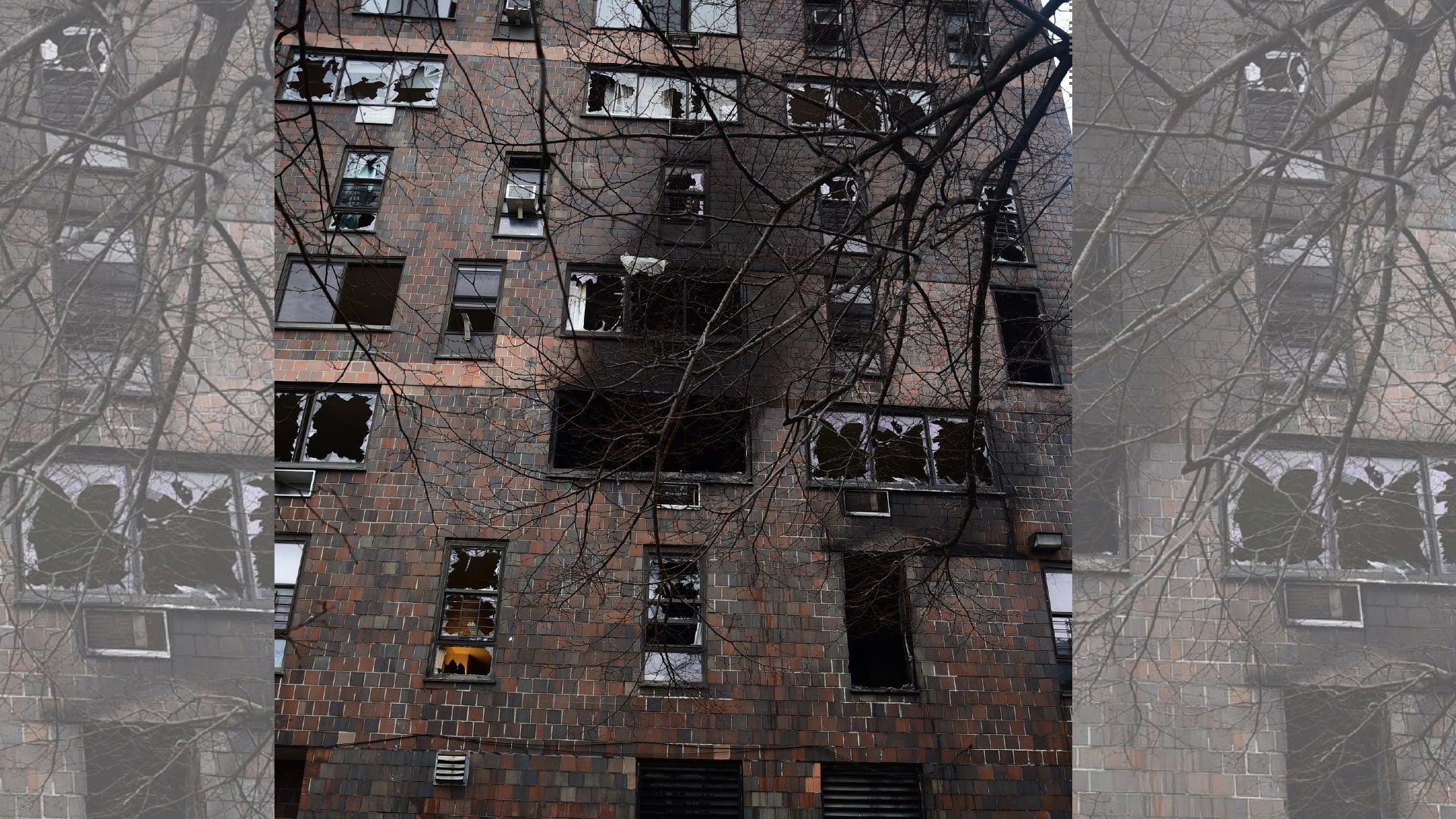 Aftermath of a fatal fire at an apartment building in the Bronx on Sunday, Jan. 9, 2022 (New York Fire Department, Twitter)

Stefan Ringel, a senior adviser to Mayor Eric Adams, confirmed the death toll. He said the children killed were 16 years old or younger.

Adams called the fire’s toll “horrific” and said “this is going to be one of the worst fires that we have witnessed during modern times.”

Firefighters “found victims on every floor and were taking them out in cardiac and respiratory arrest,” Nigro said. “That is unprecedented in our city.”

Approximately 200 firefighters responded to the building on East 181st Street around 11 a.m. Sunday. Initial reports said the fire was on the third floor of the 19-story building, with flames blowing out the windows.

News photographers captured images of firefighters entering the upper floors of the burning building on a ladder, multiple limp children being given oxygen after they were carried out and evacuees with faces covered in soot.

Resident Vernessa Cunningham, 60, said she raced home from church after getting an alert on her cellphone that the building was on fire.

“I couldn’t believe what I was seeing. I was in shock,” Cunningham said from a nearby school where some residents gathered. “I could see my apartment. The windows were all busted out. And I could see flames coming from the back of the building.”

Sunday’s fire originated in a duplex apartment spanning the second and third floors, Nigro said. Firefighters found the door to the apartment open, he said, which apparently allowed the fire to quickly accelerate and spread smoke upward.

The fire is not believed to be suspicious, but the cause is under investigation, officials said.

Building resident Cristal Diaz, 27, told the New York Post she started putting wet towels at the bottom of her door after smelling smoke while drinking coffee in her living room.

“Everything was crazy,” she said. “We didn’t know what to do. We looked out the windows and saw all the dead bodies they were taking with the blankets.”

The 120-unit building in the Twin Parks North West complex was built in 1973 as part of a project to build modern, affordable housing in the Bronx.

“There’s no guarantee that there’s a working fire alarm in every apartment, or in every common area,” U.S. Rep. Ritchie Torres, a Democrat who represents the area, told The Associated Press. “Most of these buildings have no sprinkler system. And so the housing stock of the Bronx is much more susceptible to devastating fires than most of the housing stock in the city.”

Nigro and Torres both compared the fire’s severity to a 1990 blaze at the Happy Land social club where 87 people were killed when a man set fire to the building after getting into an argument with his former girlfriend and being thrown out of the Bronx club.

Sunday’s death toll was the highest for a fire in the city since the Happy Land fire. It was also the deadliest fire at a U.S. residential apartment building since 2017 when 13 people died in an apartment building, also in the Bronx, according to data from the National Fire Protection Association.

That fire started with a 3-year-old boy playing with stove burners and led to several law changes in New York City, including having the fire department to create a plan for educating children and parents on fire safety and requiring certain residential buildings to install self-closing doors.

Sunday’s fire happened just days after 12 people, including eight children, were killed in a house fire in Philadelphia. The deadliest fire prior to that was in 1989 when a Tennessee apartment building fire claimed the lives of 16 people.