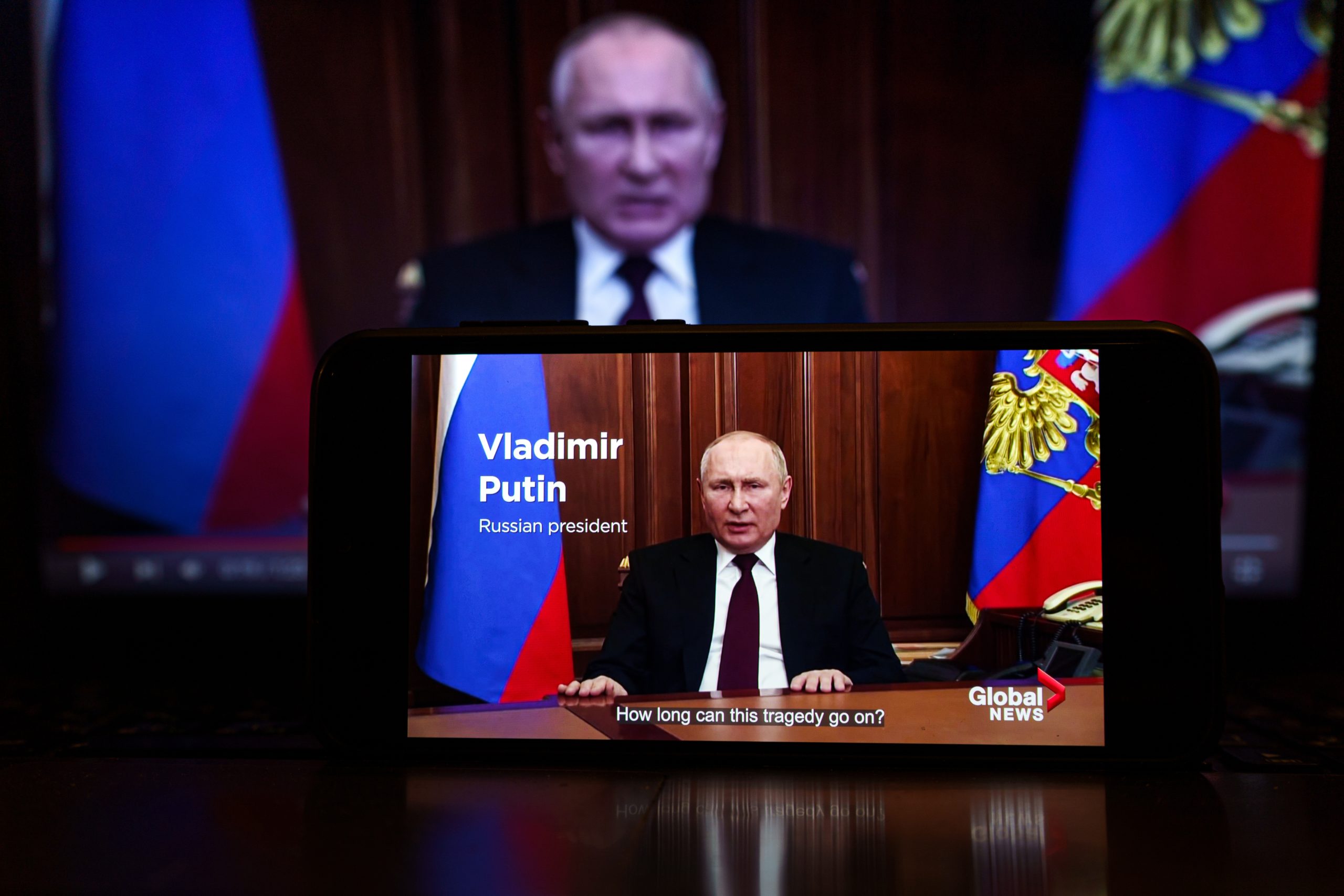 Russian President Vladimir Putin gives a televised address on Feb. 22, leading up to Russia's invasion of the Ukraine. (Shutterstock)

IZIUM, Ukraine (AP) — Ukrainian authorities were expected to begin recovering bodies Friday from a mass burial site in a forest recaptured from Russian forces, a delicate task that President Volodymyr Zelenskyy said would help show the world “what the Russian occupation has led to.”

The site, containing hundreds of graves, was discovered close to Izium after a rapid counteroffensive by Ukrainian forces retook the northeastern city and much of the Kharkiv region, breaking what had largely become a stalemate in the nearly seven-month war.

To bolster the offensive, the Biden administration announced another $600 million package of military aid Thursday for Ukraine, including more of the weaponry that has helped its troops seize the momentum.

Associated Press journalists who visited the burial site Thursday saw graves amid the pine trees, marked with simple wooden crosses. Most were numbered — and the count went into the 400s.

It was not clear who was buried in many of the plots or how all of them died, though witnesses and a Ukrainian investigator said some were shot and others were killed by artillery fire, mines or airstrikes.

There was at least one mass grave, with a marker saying it contained the bodies of 17 Ukrainian soldiers.

“The necessary procedural actions have already begun there,” he said. “We want the world to know what is really happening and what the Russian occupation has led to.”

Zelenskyy invoked the names of other Ukrainian cities where authorities said retreating Russian troops left behind mass graves of civilians.

“Bucha, Mariupol, now, unfortunately, Izium,” he said. “Russia leaves death everywhere. And it must be held accountable for it.”

The marking of individual graves with wooden crosses differed from some other burial sites discovered earlier in the war and seen by AP reporters — including some around Kyiv that are being investigated as sites of possible war crimes. Bodies found outside the capital in the town of Bucha and elsewhere after Russian forces withdrew had been dumped together and buried without markers.

Izium resident Sergei Gorodko said that among the hundreds buried in individual graves were dozens of adults and children killed in a Russian airstrike on an apartment building.

He said he pulled some of them out of the rubble “with my own hands.”

Sergei Bolvinov, a senior investigator for Ukrainian police, told British TV broadcaster Sky News that some of the people buried were shot, while others died from artillery fire, mines or airstrikes.

The mass grave of Ukrainian soldiers could contain more than the 17 bodies mentioned on its marker, said Oleg Kotenko, an official with the Ukrainian ministry tasked with reintegrating occupied territories.

“We haven’t counted them yet, but I think there are more than 25 or even 30,” he said, basing his estimate on video footage of the site that Russian soldiers posted on social media.

Kotenko also said that individual graves marked with crosses contained civilians who died. He said he expected the bodies would be exhumed for DNA testing.

Before exhumation work could start, investigators with metal detectors scanned the site for any hidden explosives. Soldiers strung red and white plastic tape between the trees to mark off parts of the site. A few graves had wreaths of flowers hanging from the crosses, and some bore people’s names.

Izium was a key supply hub for Russian forces until they withdrew in recent days. Izium city councilor Maksym Strelnikov told reporters in an online briefing from an undisclosed location this week that hundreds of people had died during the fighting and after Russia seized the town in March. Many died from shelling and couldn’t get a proper burial, he said.

His claims could not be immediately verified, but similar scenes have played out in other cities captured by Russian forces, including Mariupol.

Strelnikov said an untold number of people also died from lack of proper health care since the “medical infrastructure of the city was destroyed.” Most of the city’s pre-war population of 47,000 fled to Ukrainian-held territories. Strelnikov said 10,000 residents remain in the ruined city — bracing for more hardship with winter coming and most infrastructure destroyed.

“We have already come across the exhumation of individual bodies, not only with traces of a violent death, but also of torture — cut off ears, etc. This is just the beginning,” Enin said in an interview with Ukraine’s Radio NV.

“All these traces of war crimes are now carefully documented by us. And we know from the experience of Bucha that the worst crimes can only be exposed over time,” Enin said.

The $600 million in additional U.S. military aid announced Thursday will include more of the same types of ammunition and equipment that have helped the Ukrainian counteroffensive beat back Russian forces in large portions of the east and in the south. The White House said it was the 21st time that the Defense Department has pulled weapons and other equipment off the shelves to deliver to Ukraine.

The aid is “carefully calibrated to make the most difference on the battlefield and strengthen Ukraine’s hand at the negotiating table when the time is right,” Secretary of State Antony Blinken said in a statement.

He praised the ”admirable grit and determination” of Ukrainians “defending their homeland and fighting for their future.”