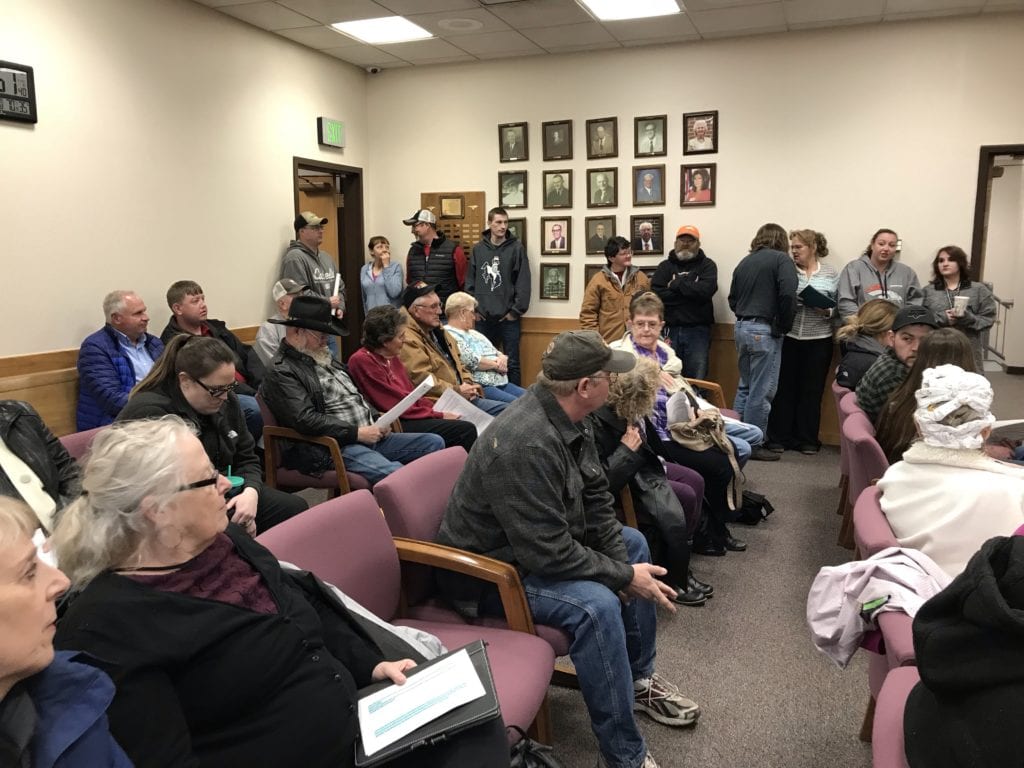 CASPER, Wyo. — The Mills Town Council held a regular meeting on Wednesday, May 8.

The Council meeting room was filled to standing room only as Mills citizens and other Natrona County residents came to voice concerns over the Town Council’s decision to cut the Mills Fire Department.

After June 30, the nine firefighters currently employed by Mills will be laid off, and only administrative staff will be retained to provide services such as inspections.

“My concern would be the response time,” Mills resident Laura May told the Council, pointing to how cutting the fire department may increase response times which could cause insurance increases.

May said she drove out to other nearby communities to get a feel for what the response times might be should Mills contract with a town like Bar Nunn to provide emergency and fire services.

May added that cutting the fire department would not only affect the firefighters that will be laid off, but also their families. She also said she thought response time was important because of things like fires and explosions.

“What if another tragic event occurs?” she asked. “I do feel that our fire department is essential and not optional.”

May acknowledged that the Town Council is in a difficult position.

“I think you guys inherited a horrible mess from the previous administration,” she said. “We do have amazing emergency responders. It’s time that we start thinking outside the box.”

Another citizen, Catherine White, said that she is a registered nurse. She brought her two year old to the meeting and said that a friend of hers also has a two year old child.

White said that the Mills Fire Department responded to an emergency involving her friend’s child.

“Mills Fire Department saved his life,” she said. “If we had not had a fire department, that two year old child would be dead.”

White added that as she understood it, dispatchers outside of Mills sometimes aren’t sufficiently familiar with Mills.

“The Wyoming Medical Center dispatcher couldn’t even find this place,” she said.

White suggested that raising water and sewage fees on Mills residents might be an alternative way to fund the fire department. Though she received applause for this proposal, later in the meeting, another Mills resident said she thought raising these rates would be too big of a burden on older citizens of Mills.

“You folks are now putting a price on a life,” he told the Council. “Getting rid of the fire department is not the answer at this time.”

Harris suggested the Town Council find a way to keep funding the fire department temporarily and take steps to re-establish a volunteer service.

Jared Kelly said that he’d previously worked for the Mills Fire Department. He also pointed to the issue of response times. He also questioned the accuracy of some of the numbers the Town has released as to the number of calls the fire department responds to, saying they are higher than what the Town has stated.

Mills citizen Linda Gruber questioned why the Council was willing to continue supporting the police department but not the fire department.

“Why can’t you take some money from the cop shop?” she asked.

Kim Perez said that she’s been a life long resident of Mills. She suggested that the Town of Mills do more to seek public input on issues such as this.

“In your next water bill, give us a questionnaire,” she said. “You have made the decision to close the Mills Fire Department. Why wasn’t it brought up before?”

“This affects every single one of us. There’s certain people that we can’t replace and we shouldn’t.”

Perez added that instead of looking to go back to a volunteer fire department in order to free up One Cent sales tax funding for park and infrastructure improvements, the Town should instead seek volunteers to carry out some of those beautification efforts.

She also asked the Council to provide an itemized budget for the year.

“I can’t find a 2019 budget published anywhere,” she said. “I would like an itemized budget. Just give us some information.”

Morgan Shrieve attended the meeting and read a letter penned by her sister.

“This decision is irresponsible,” the letter read. “It does not seem that you have any well thought out plan.”

“You are elected officials and you are setting yourself up for something devastating. Please keep all of our…families safe.”

Mills citizen Nora Parker expressed a desire for the Town Council to communicate in a more open way.

“We don’t get that warm and fuzzy feeling from you folks,” she said.

Mike Nobels attended the meeting and said that the Mills Fire Department had saved his life when he had a seizure.

“The first one’s there were the Mills Fire Department,” he said. “I don’t know if I’d be alive to this day.”

“What is happening is not right at all.”

“Senior citizens, what’s going to happen to them?” he asked, adding that he is concerned for his mother. “I hate to think about what would happen to her.”

Nobels expressed his gratitude for the Mills fire fighters.

“You guys are my friends and I will never forget you guys,” he said.

Darcie Gudger suggested that the Town Council consider an ambulance subscription plan in which residents pay an annual fee for ambulance services. She said that might alleviate some of the funding issues.

Brittney Johnson said that losing the fire department scares her. She added that she works at the Wyoming Medical Center and does not think they are in a position to provide sufficient emergency services to Mills.

“They can not take in this volume,” she said. “It makes my stomach hurt just knowing that.”

Penny Keel attended the meeting and asked whether the Town Council was actually going to consider the suggestions citizens had voiced.

“I think that everything that was said is falling on deaf ears,” she said. ” I think your mind is made up.”

Some of the citizens asked for more information and whether the decision is final. The town’s attorney said that specifics on the Town of Mills talks with the Mills Professional Firefighters could not be discussed for legal reasons.

Mills Mayor Seth Coleman told the citizens that the Town Council is taking the issue seriously and regrets the position that it is in. He said that he would look into setting up a drop box where citizens could leave their comments and suggestions after one resident suggested the idea.

Coleman also said he’d try to get some numbers on how much water rates would have to be raised in order to fund the department.

He said that he’d try to have more information available on the status of Mills’ plan during the next Mills Town Council meeting, which is scheduled for Wednesday, May 22.

Note: Due to the number of people at the Town Council meeting, Oil City was unable to confirm the spelling of everyone’s name who spoke at the meeting. If your name has been misspelled, please let us know and we will change the story to reflect that.