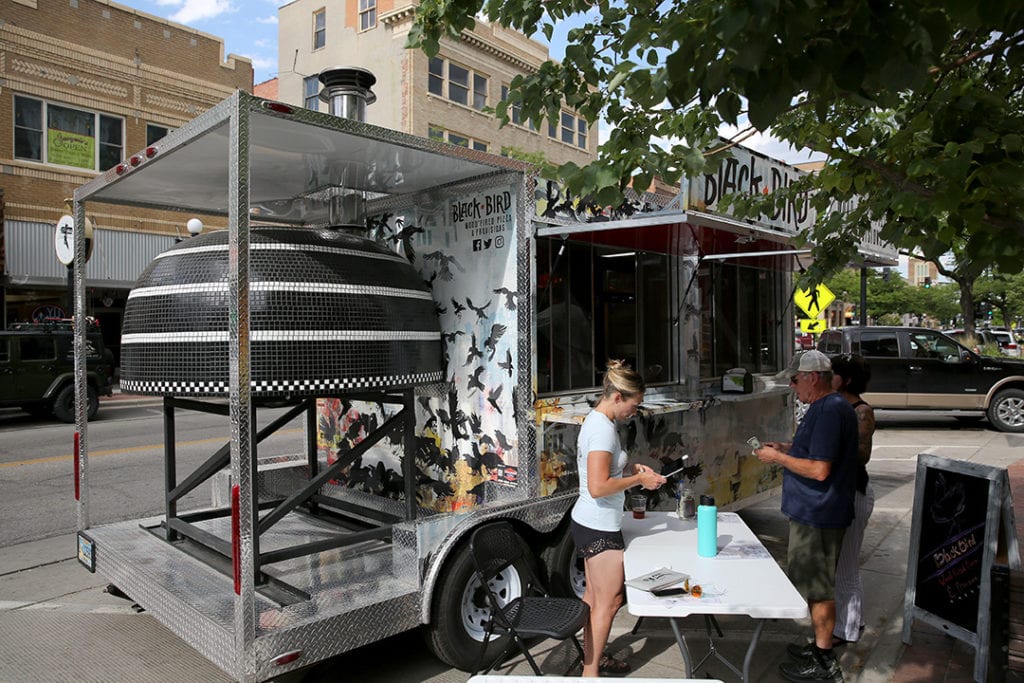 The dome-shaped wood-fired oven was custom built in California, but the design tradition goes back hundreds of years in Italy according to Josh Barhaug. (Dan Cepeda, Oil City)

Huber’s comments came during the Council’s Tuesday, May 14 discussion of a recommendation from the fire department to regulate food vending trailers in the same way that food trucks are given oversight.

Blackbird Wood Fired Pizza and Provisions owner Josh Barhaug has said that the fire department’s proposal targets his business as it would require him to install a Type 1 hood system in his trailer, something he says shouldn’t be necessary for the type of wood fired oven he uses.

“That’s not evidence to support a change,” she said.

Stedillie said that google searching something as specific as food truck explosions would obviously bring back results that would suggest food trucks are dangerous.

She said that someone could just as easily google search food trucks operating with wood fired ovens and find evidence that these can operate safely with safety measures other than what the fire department say are needed.

Stedillie also replied to comments from Council members such as Councilman Stever Freel, who said that he supports dealing with all mobile food vendors in a consistent manner.

“Consistency throughout the code makes my job assisting clients easier,” she said.

But she said consistency is lacking in an area other than the one Freel was referring to.

Stedillie said that the fact that regulations apply differently to mobile food vendors as compared with fixed establishment commercial kitchens was inconsistent as well.

“It doesn’t make sense and it’s unfair to hold them to a different standard,” she said.

Stedillie was pointing to the fact that mobile food vendors need to apply for a permit on an annual basis, which means that they are subject to keeping up with updates to the fire code on a more regular basis than fixed location restaurants.

That is because restaurants only have to demonstrate compliance with the code when they remodel or when a transfer of ownership occurs.

Stedillie added that Barhaug spent over $100,000 on his trailer. She said that if the City wants to be consistent, they should either require annual permitting for restaurants and mobile food vendors, or that both should only have to re-demonstrate that they meet code requirements when they make upgrades or change ownership.

“Why should he have to change every year [if restaurants don’t?” Stedillie asked.

She emphasized that she and Barhaug’s issue is not with the fire department’s emphasis on safety.

“Both my client and I believe the fire department is operating from a position of genuine concern,” she said.

However, Stedillie asked why the fire department had not found a way to communicate to Barhaug that there were safety concerns with his trailer if that was their position.

Barhaug and Stedillie maintain that they’d had information that the fire department had shown a video pulled from Blackbird’s Facebook page to interns, saying that it contained evidence that his oven was unsafe and needed to install a hood system.

“They have an obligation to contact us,” she said.

Stedillie added that her concern is that the fire department and the City have not been transparent when contemplating changes to the code. She said that she thinks they should have brought more mobile food vendors to the table when they consider making changes that affect them.

She added that had she and Barhaug not been closely following the actions of the City Council, the changes may have gone through and left owners such as Barhaug surprised.

When asked about Councilman Bob Hopkins comments that the Council should consider the issue more closely and look into how other communities deal with specific ovens like wood fired stoves, Stedillie said she thought that was a reasonable position.

“We should look to other municipalities,” she said.

Council’s Tuesday discussion also raised the issue of whether mobile food vendors had means of appealing code inspectors’ decisions. City Attorney John Henley said that at the local level, he did not think such a process was in place. (Oil City reached out to Henley on Thursday, but he was out of the office and unable to immediately comment).

Inspector Ryan Neff said, on the other hand, that mobile food vendors could appeal decisions to the International Code Council.

Stedillie said that she didn’t think that organization had jurisdiction over Barhaug’s case, and said that a local means of appeal should be in place.

Casper Fire-EMS Chief Thomas Solberg also said on Thursday that he thought the City should consider establishing a more formal means of appeal.

Stedillie said she thinks the approach to mobile food vendors to this point has been discouraging.

“It’s really sad because it discourages small businesses and entrepreneurship,” she said.