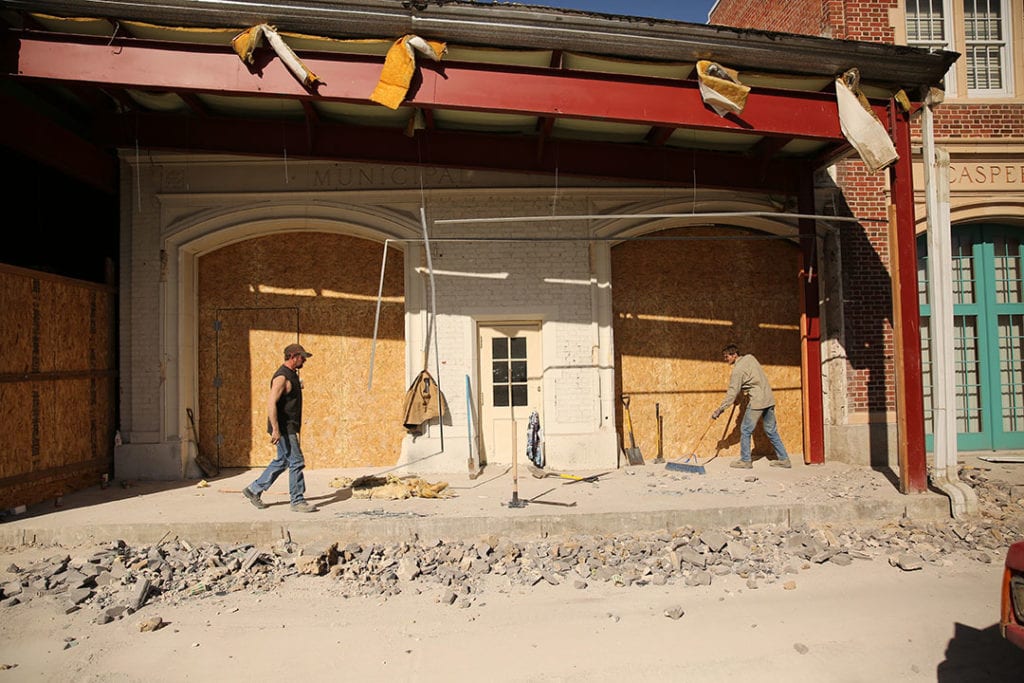 The municipal garage attached to the historic Casper Fire Station building is exposed for the first time since the mid-70s in downtown Casper. The garage was built over and used as part of the Plains Furniture Building for decades until early 2016, when the city bought the property. (Dan Cepeda, Oil City)

CASPER, Wyo. — The City of Casper has received only one proposal to redevelop the former Plains Furniture Building. The proposal comes from FLAG Development.

FLAG also submitted a proposal in the City’s previous round of requests for proposals to develop the former Plains building and adjacent properties. The City Council decided to reject those proposals because they did not meet or exceed the City’s appraised values for the properties.

City Council has not yet indicated whether they are likely to accept FLAG’s proposal or not.

The City’s most recent request for redevelopment proposals included language that would allow the City Council to accept an application that didn’t meet the appraised values, but was a price the Council considers a “fair-market value”.

The City originally planned to tear the building down after purchasing it in 2016 for downtown parking, but after discovering aspects of the car dealership, including a maintenance garage and a garage bay of the old Casper Fire Station No. 1.

The principal office of FLAG Development, LLC and members are located in Casper, and consist of residents Brandon Daigle and Kevin Hawley.

According to a copy of the FLAG Development proposal, the name of the proposed development for the site will be called “The Nolan”.

The Nolan is proposed to include up to eleven market-rate loft townhouses within the existing Plains Furniture property. The proposal describes each unit as “approximately 1,300 square feet, include a mezzanine with a second bedroom, office or flex space, as well as a private patio.”

The original historic Nolan Service Building is proposed to be rehabilitated by utilizing historic tax credits, and renovated to become 8,200 square feet of flexible office space.

The proposal also includes a seven three-story market-rate rowhouses in the south parking lot area. Units for the building are described as “approximately 1,760 square feet and include 3 bedrooms and 2 bathrooms with oversized 1-car private garages. ”

The Livery Stable, an area that has met with some controversy, will be demolished and reconstructed under the proposal and used as a private parking lot for the residents and tenants of The Nolan.

Local historians have spoken at city council meetings to propose saving the livery stable as a significant part of local history.