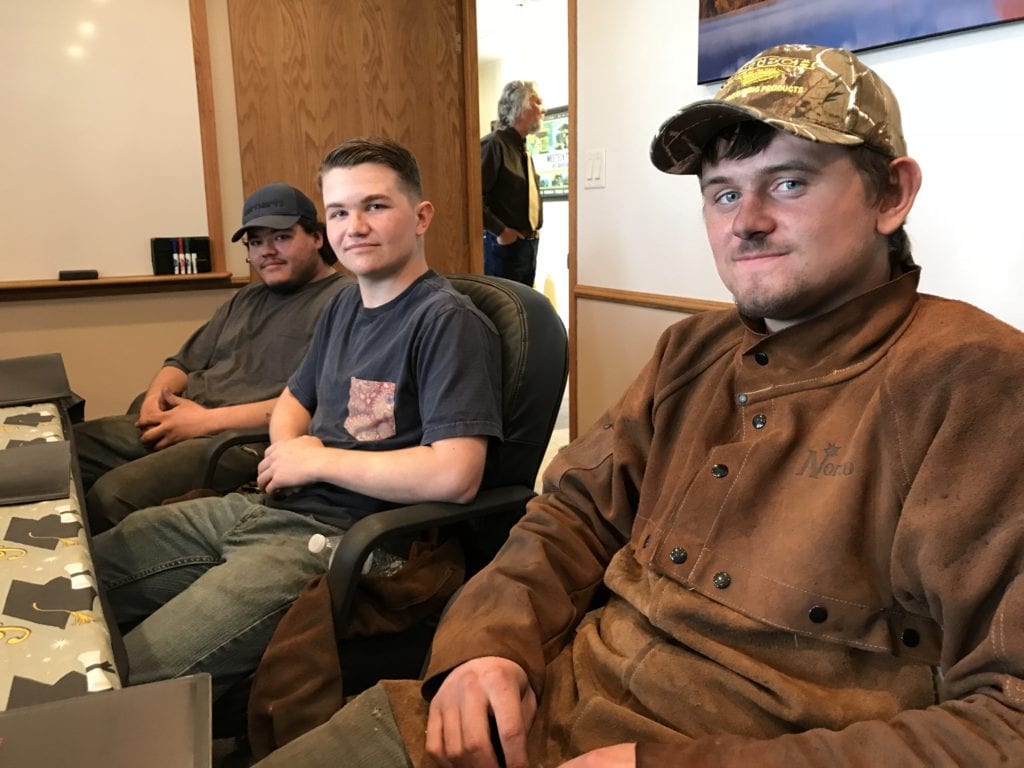 The students impressed the company and a ceremony was held on Wednesday, May 29 during which they signed contracts accepting their new positions.

“I like welding and if I start something when I’m young then I won’t have to work when I’m old,” Cole said, adding that he was grateful for the opportunity that Pathways had afforded him.

“Pathways is kind of like a college,” Triplett chimed in. “They prepare you for the workforce.”

Pathways Career Facilitator Guy Sallade said that this is the first year that Pathways welding students engaged in work experience with a partner organization had received job offers directly upon graduation.

Sallade added that Pathways is pleased with the success of their partnership with Austin and hopes to repeat the success in the future.

“We want to expand this further,” he continued.

The students said that they’d figured out they wanted to go into welding at different points during their educational paths.

Harris said he discovered a love for welding during his freshman year and Triplett first explored options in the automotive industry.

Cole talked about what it was like balancing the half-day work experience, half-day class schedule.

“Sometimes it was hard to decide if you want to go home and take a shower or go to English class,” he joked, adding that his work experience took place in the mornings.

“It was pretty crazy that we got [this opportunity] as high schoolers.”

The students received compensation for their time over the semester and Austin Human Resources Manager Ted Gardener said they were treated like regular employees.

“I don’t know how anyone lives on minimum wage,” Cole said, again expressing gratitude to get a jump start into a high-paying trade.

He and his classmates said they’d learned a lot during their work experience. Triplett said that they worked on many kinds of projects, welding rails, ribs, canopies and more.

“There’s a lot that goes into welding,” Cole said.

The students also said they were grateful for their Pathways welding instructor Mance Hurley who took them on a class tour to Austin before they joined the work experience program.

“I wouldn’t even know this was a place without Mr. Hurley,” Cole said. “You don’t really see what’s going on in Casper if you’re not in it.”

Triplett said that he’s happy to spread the word about what Pathways has to offer.

“I’ve been trying to do that since day one,” he said, adding that he often recommends the program when he encounters middle school students. “I highly recommend doing it.”

Harris said that the ability to gain experience and industry certifications was a big plus at Pathways.

“With those certifications you can go out and get a job if you want to,” he said, adding that the work experience was very valuable. “I definitely learned a lot when I got here.”

Gardener said that the partnership with Pathways was a definite benefit to the company due to the ability to train and hire full-time welders. He said that Austin often employs contract welders who he said can sometimes neglect doing quality work because they don’t have a stake in the company.

He and Sallade both said they thought it was important that the community celebrate students who show success in career and technical areas. They said that while athletes often receive public accolades, this is something that should apply equally to students on different tracks.

Some of the students supervisors at Austin said the same opportunities weren’t afforded to them in high school.

“The welding program wasn’t a big deal back then,” one supervisor said.