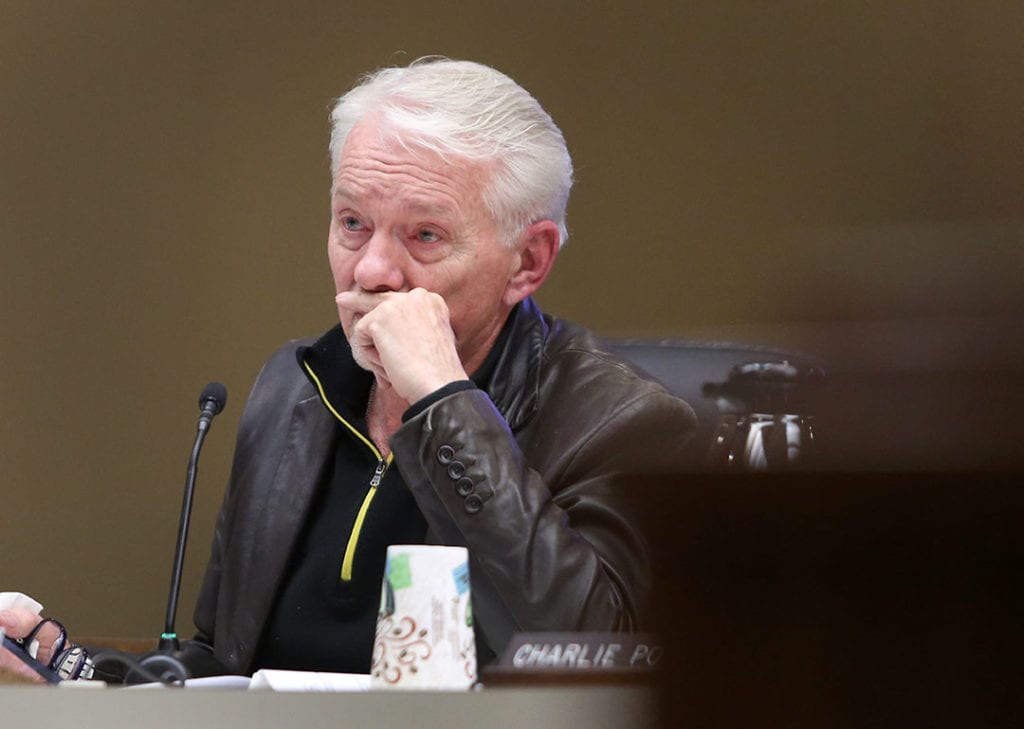 Attorney and former City Councilman Dallas Laird was among those who shared their views on public defender staffing issues.(Dan Cepeda, Oil City)

CASPER, Wyo. — A staffing crisis has led to State Public Defender Diane Lozano informing judges that public defenders will not be appointed to misdemeanor cases in Natrona and Campbell County.

Lozano and her office have been found in contempt of court in Campbell County, and the circuit court there said on Friday, May 31 that the State Public Defenders Office have filed for an appeal with the Wyoming Supreme Court.

Opinions vary as to the cause of the staffing shortages and what should be done about that problem.

Attorneys Frank Chapman and Dallas Laird, both former Wyoming State Public Defenders, agreed that the main problem is that the Wyoming Legislature has not provided enough funding to attract and retain attorneys to accept public defender positions.

“It’s all based on money,” Laird told Oil City on Thursday. “People don’t really care about funding that has to do with criminals.”

He added that the Legislature should “infuse more money into the system to hire criminal defense lawyers.”

Another way to alleviate the staffing crisis would be to stop putting people in jail, Laird said. Wyoming law does not require counsel be appointed in misdemeanor cases if judges state on the record at initial hearings that sentencing will not involve any term of imprisonment.

“In my opinion, they should just quit putting people in jail,” Laird said. “You don’t cure a man by putting him in jail.”

He said that in addition to jail sentences being an ineffective way to rehabilitate offenders, that also puts an added financial burden on communities.

Laird pointed to the example of alcoholics being repeatedly jailed and released, saying that they are often released in order for government entities to avoid having to pay bills they’re responsible for if an inmate requires medical attention while in jail or prison.

He said that leads to a situation in which offenders are continually recycled through the system.

Natrona County Circuit Court Judge Steven Brown said that the solution to the issue is not to implement a blanket policy of taking imprisonment off the sentencing table.

He said that judges should keep that as an option in domestic violence, possession and DUI cases. Furthermore, Brown said that stating on the record during initial hearings that imprisonment would not be a sentencing option would be impractical.

That is because judges have to deal with a high number of cases at initials which may not allow them to make a sound determination that incarceration should not be recommended.

“There’s no statutory or legal authority that allows them to do this,” he said.

He added that such a decision raises serious questions about the protection of citizens’ rights.

“Are we going to have to modify Miranda warnings?” he asked.

Miranda rights require anyone placed under arrest be informed of their right to remain silent and that anything they choose to say can be used when the state prosecutes their case against them.

Miranda also requires that they be told they have the right to an attorney and that an attorney will be provided to defend them if they cannot afford to hire their own.

The State Public Defender can motion that a court appoint counsel other than a public defender, under Statute 7-6-109.

Casper City Councilman Mike Huber formerly practiced as an attorney. He is also a former judge but emphasized that opinions he shared were not made in that capacity.

Huber’s position on the State Public Defenders Office’s ability to declare that they won’t appoint public defenders to misdemeanor cases is similar to Chapman’s perspective.

“My understanding is that in each individual case they’d have to come in and make a motion,” he said. “I couldn’t find anything in there in my reading that gave them the authority to come in and say we’re just not going to do this.”

Brown said that the NC Circuit Court is considering all options on how to deal with the staffing crisis. While he said that contempt hearing were not off the table, he’d prefer not to go that route.

Instead, Natrona County judges may begin to appoint attorneys outside of the NC Public Defenders Office to take on misdemeanor cases. Those attorneys may be paid out of public defenders office funds.

Brown said volunteers could also be sought, but said this option may not be ideal since an unpaid attorney may not provide as competent of a defense as a lawyer receiving compensation for their time.

Brown added that the court may also lean on the idea that serving appointments to the misdemeanor cases is a duty of being a member of the Natrona County Bar Association.

Laird said that relying on attorneys not well versed in criminal areas of the law would be problematic.

“That’s like asking a doctor who is a dentist to go in and do heart surgery,” he said.

Laird added that while he’d previously provided defense in criminal cases, he hasn’t done that in 20 years.

“I did thousands of criminal cases,” he said, but added that he doesn’t think he’d be prepared to do so now.

“Lawsuits are lawsuits, whether they are civil or criminal or whatever,” he said. “I would have confidence in virtually any good, competent lawyer to pick up some of these kinds of cases and get up to speed on that area of the law and be able to do a competent job representing someone.”

One thing all the people Oil City spoke with agreed upon was the importance of protecting people’s rights to court appointed counsel.

“A lot of these folks that find themselves in need of public defenders, they’re really down on their luck,” Huber said. “They are down and out. They don’t have anything.”

“And if you don’t provide legal representation and if you don’t see that their rights are guarded, then all of those rights suddenly become meaningless.”

“These people, many of them desperately need and deserve good, competent representation.”