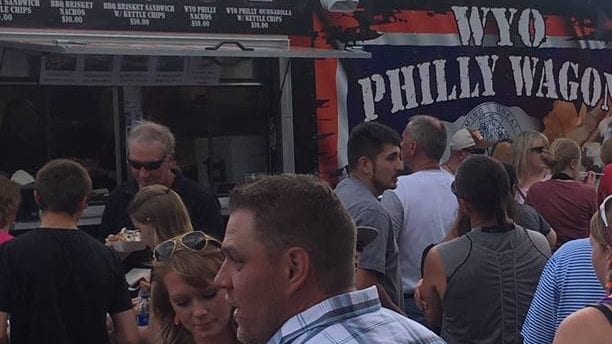 CASPER, Wyo. — Some Casper food truck owners still say that the City of Casper should remove the hourly restrictions for parking permits downtown and in the Old Yellowstone District.

“So far, nothing has been worked out,” Dave Hinton, owner of Lefty’s BBQ and Catering said on Wednesday, July 24.

Hinton says he’s facing an issue different from some other mobile food vendors. Because he does not cook in an enclosed trailer, he is required to prepare all food on site.

“My food takes a long time to cook,” he said.

With the downtown and OYD parking permits only allowing people to serve from 3 pm to 3 am Monday-Friday and from 1 pm to 3 am on weekends. Hinton says that since he prepares slow-cooked BBQ, that doesn’t allow him enough time to prepare and start selling his food.

The Casper-Natrona County Health Department provides inspections to mobile food vendors. Hinton says they were willing to allow him an exception to serve at a charity event on Saturday.

Hinton had initially asked the City Council at two consecutive meetings for an exception to the time limits, but they told him to ask the Casper-Natrona County Health Department to work something out.

Ruth Heald, Environmental Health Program Manager at the Casper-Natrona County Health Department, says that they’ll be willing to work with Hinton on a case-by-case basis.

She said that Hinton has to obtain temporary permits to serve since he cooks in the open air. The issue with transporting the BBQ food from off site, she said, is ensuring that it maintains a proper temperature.

Heald said that they’ll work with Hinton and people like him so long as the City’s hourly parking restrictions remain in place.

Rob Caputa owns the Wyo Philly Wagon and says that the parking permits should be done away with entirely.

“What I want them to do is pull the restrictions entirely,” Caputa said.

But if the City is able to designate a parking lot near Midwest Avenue where food trucks could park without time restrictions, Caputa says he think that would clear up the majority of people’s concerns.

“The citizens of Casper will throw roses at their feet,” he said. “Every food truck would love it.”

Assistant to the Casper City Manager Fleur Tremel said that the City is still in talks with the State of Wyoming, who owns the proposed parking lot, about securing a long-term lease on the lot and allow the City to make it a food truck spot.

Tremel said that she thinks the state is open to the idea, but has some concerns about insurance since they’d be liable for the space as the owner.

She said that City staff is preparing to talk with the City Council about a proposed long-term plan for the lot on August 27.

Caputa says that he suggested to the City that they establish that lot last summer. He said that one of the issues with the way food trucks have been regulated is that they are only able to serve during warmer weather.

The summer is the best time for food truck business, so each delay in regulation changes limits what they can do.

He said that the permit costs, which are $25 per space, per day, is also prohibitive.

“You’re already starting out in the red before you even begin serving,” Caputa said.

He said that food trucks can make profits of about $2,000 to $3,000 at large events, but that only happens a few times per summer and doesn’t account for all of the costs that will cut into those gross profits.

Food truck owners have to be strategic about when they look to get downtown permits since things like bad weather could result in really low sales or an inability to serve at all.

Both Caputa and Hinton said that the hourly restrictions are unfair to anyone who wants to serve things like breakfast foods or wish to serve lunch.

Caputa said that some Council members have recently been in touch with him to discuss the issue, though he didn’t say who those were.

Councilman Ken Bates has said he thinks the hourly restrictions should be left in place on weekdays but eliminated on weekends.

Council did not have the appetite to consider Bates’ proposal. Vice Mayor Shawn Johnson has said that he thinks there are a number of Casper citizens who oppose doing away with the time restrictions, but don’t choose to voice these concerns publicly due to the contentious nature of the topic.

Hinton says that he’s not trying to cause problems, but that he just wants to have a workable solution for the problems he is facing.

“This great nation was made strong because of free enterprise,” Hinton wrote on Facebook. “We the people decide whether a business succeeds; it should not be base on government restrictions. Casper streets are public streets that should be open for use by all members of the public.”

The City has seen that differently, arguing that allowing food trucks to monetize public space may be unfair to businesses that lease private property in order to operate.

Traffic congestion along Second Street has also been part of the reasoning for requiring the permitting downtown.

Caputa said he thinks the City should have never gotten involved in regulating food trucks in the first place, saying that the Casper-Natrona County Health Department “had it under control.”

Nevertheless, he’ll be content if the food truck parking lot ever gets established.

“It would be a great spot,” Caputa said, adding that it would be in a great location to service employees working at the planned new state office building nearby.

In the meantime, Caputa thinks the City should at least consider temporarily doing away with the downtown restrictions until they are able to designate that lot in order to give food trucks an option during the remaining warm weather window this season.