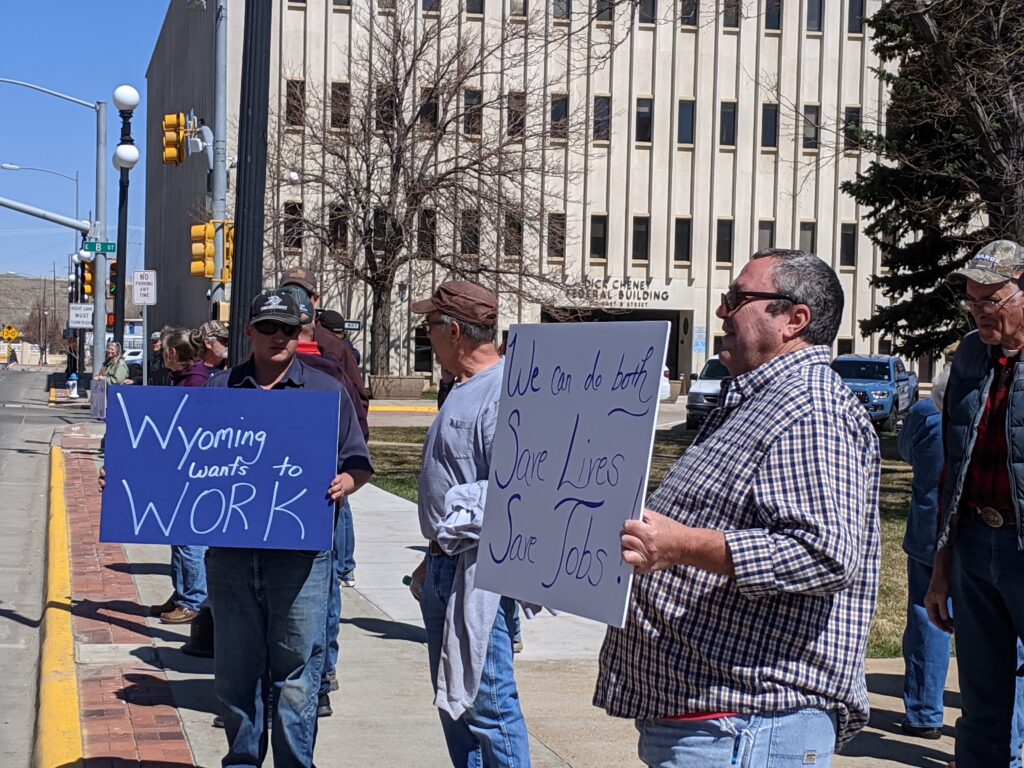 Protestors of COVID-19 closure orders gather on the noon hour, Thursday April 9, 2020. Literature handed out at the event described the gathering as a "peaceable assembly to defend our constitutional republic." (Trevor T. Trujillo, Oil City News)

CASPER, Wyo. — Multiple people gathered, carried signs, and waved at honking vehicles, Thursday April 9, 2020. Literature handed out at the gathering described the event as a “Peaceable Assembly to Defend Our Constitutional Republic.”

A slogan on one sign, printed on the literature, and repeated by the event organizers was “we can save lives and save jobs.”

“It’s a grassroots gathering,” said Cathy Ide. “Seeing our town turn into a ghost town, with all the businesses shuttered. It’s pretty upsetting. I believe it’s not an either-or situation regarding the Wuhan flu, Chinese virus, whatever.”

Ide says that she hoped the demonstration would encourage Wyoming’s Governor Mark Gordon to lift various closure and restrictions on Wyoming businesses, gathering places, and service providers. Gordon’s first of three orders was placed in mid-March. Currently the restrictions have been extended until the end of April.

Ide said that she didn’t have a particular alternative plan or call for action, but urged Governor Gordon to take back his order, open Wyoming, and reopen businesses.

The closures come in the wake of concerns surrounding a global pandemic of coronavirus caused COVID-19. In addition to closures of some businesses and venues, state and federal health officials are urging Americans to socially distance themselves from other people, keeping approximately six feet of distance between yourselves and others.

“I want to emphasize the point we are all making,” Gordon said during his opening comments to press during an April 3, 2020 briefing. “Stay home. Wash your hands. Maintain six feet of distance between yourselves. Only go to the store as an individual, not as a group. Do not congregate in groups of more than ten. In the store, if you are a store, for heaven’s sake don’t allow people to mingle in the aisles or the checkout lines. Now that is the behavior we need.”

While some people maintained their distance at Thursday’s gathering in Casper, others did not seem to heed health officials and the Governor’s warning. Several people were observed clustered, gathered, talking, smiling, and joking.

While Ide was speaking with press, a passing vehicle honked and a passenger leaned out the window yelling “six f—ing feet,” but the protesters continued undaunted. Ide apologizing to reporters for the passerby’s outburst.

“I think it would be up to the business owners,” Ide said. “If they’re open to their employees working with them, and employees want to come, and customers want to come and frequent their restaurant- for example- they should be able to do that,” Ide said. “You should be responsible for your health, and I should be responsible with my health. We all make our own decisions. We govern ourselves.”