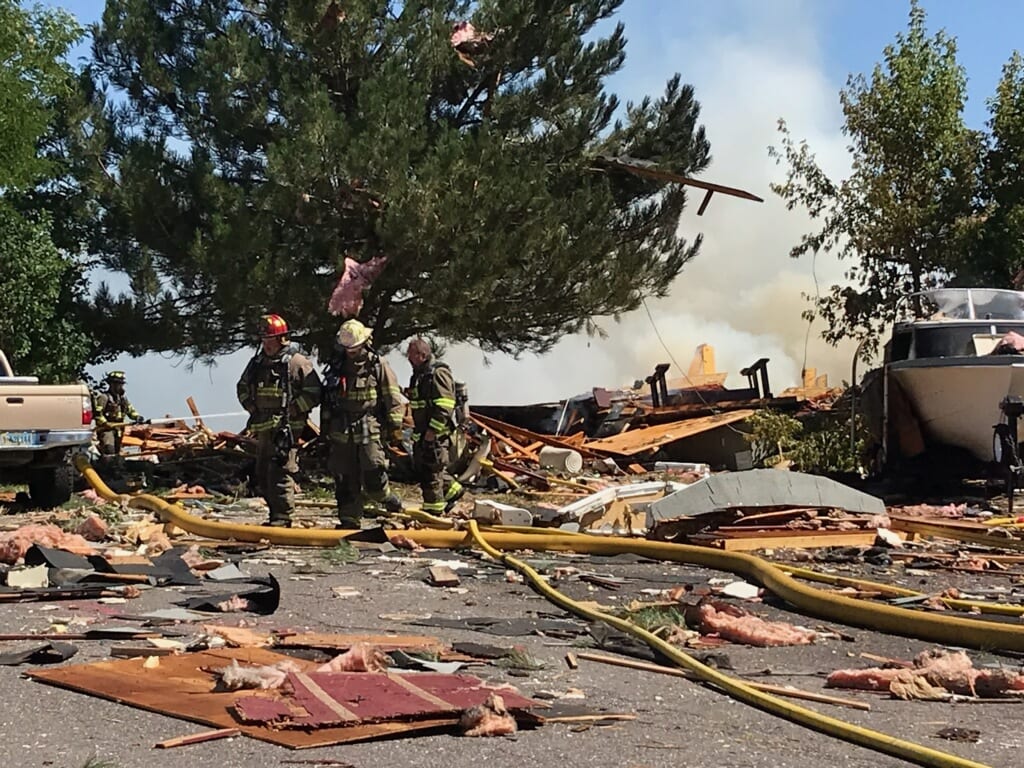 CASPER, Wyo. — The Casper Police Department awarded telecommunicators working at the Casper-Natrona Public Safety Communication Center for outstanding work in responding to 911 calls in 2019 during their annual awards ceremony in February.

For example, PSCC telecommunicators Cresta Jennings, Heidi Gehlhaar and Tawny Arellano were given “Certificates of Commendation” for their response as calls started pouring in after a home explosion in Casper last September:

In September of 2019, a call for an explosion came in. During the next hour PSCC would answer 94 calls from citizens while keeping up with the radio traffic.

Telecommunicator Jennings added the original call and obtained detailed information from the first caller and then assisted with other incoming calls. During the course of the call, 19 officers would be placed on the law portion of the call. Telecommunicator Jennings dealt with requests from all officers on scene promptly and then she helped the others in the room any way she was able. She was an integral part of the team when it came to making notifications. In the course of the call 20 different units would be placed on the Fire and EMS calls.

Telecommunicator Gehlhaar continued to maintain a detailed log of which agencies were covering the city as all of the city units were on the explosion call. She then continued to answer incoming calls and make notifications to the electric and gas company, as well at the ATF office, all while still logging the incoming radio traffic.

Telecommunicator Arellano kept track of all the officers until they arrived on scene. She helped pick up calls that were on hold and completed numerous outbound phone calls at the request from the officers, to include calling the water department and the on call fleet for the fire units.

Telecommunicators Emily Anthony and Matt Lemm received Certificate of Commendation for their response to a 911 call about a woman buried under an avalanche in March 2019. Casper PD explains the call as follows:

In March of 2019, a 911 call was received for a female who was buried under an avalanche of snow that had fallen off the roof of her house. Law Enforcement, Fire, and Medical personnel all responded to the area in an attempt to rescue the female and provide lifesaving assistance.

Telecommunicator Anthony was instrumental in initiating the quick response of the Fire department and EMS personnel from the Natrona County Fire Protection District, Casper Fire Department, Wyoming Medical Center and Life Flight. Telecommunicator Anthony also assisted in recovery efforts by making phone calls to Hogadon Ski Area, Natrona County Road and Bridge, other outside agencies and coordinating their assistance with personnel and equipment needs during the event.

Telecommunicator Lemm was instrumental in initiating the quick response of the Natrona County Sheriff’s Office. Telecommunicator Lemm also assisted in recovery efforts making phone calls to Wyoming Department of Transportation and other outside agencies and coordinating their assistance with personnel and equipment needs during the event.

In July of 2019, a call was received for a child who had possibly been abducted and returned home. In the hours that followed, as more information was released to the public about the incident, the Public Safety Communications Center was inundated with phone calls from citizens with tips about the suspects truck, location of the truck, and other suspicious incidents that had happened recently in the greater Casper area.

Gehlhaar received two additional Certificates of Commendation for her response during calls in February and July of 2019. The Casper PD explains as follows:

In February of 2019, a call for a security alarm and unconscious female was added. Telecommunicator Gehlhaar quickly picked up the call for the unconscious female and administered Emergency Medical Dispatch instructions until the officers arrived. Telecommunicator Gehlhaar was diligent in logging all of the incoming radio traffic from all officers into their radio logs, to include addresses that were checked while they were canvassing the neighborhood. She was asked to obtain the names of all the Fire and EMS units that responded and to ping a phone for possible suspects. She assisted in calling additional officers to come in as well as make notifications.

In July of 2019, a call came in regarding a suicidal subject. The caller did not have an address, but had a name. Heidi promptly searched the CAD system and added a call with the address she found. She added all pertinent information into the call while simultaneously dispatching deputies to the address. She obtained directions to the residence from the caller and verified they matched the address she located. Telecommunicator Gehlhaar displayed a high level of compassion and professionalism while speaking to the caller and kept her apprised of her actions, while explaining any silences on her end while she was speaking on the radio.

Jennings received an additional Certificate of Commendation for her response to a security alarm alert in February 2019:

In February of 2019, a call for a security alarm was added. Cresta was quick in dispatching officers to the call and immediately moved comments from the unconsciousness call to the security alarm call so that officers would have access to all the available information. She kept the responding officers updated on the information and once on scene assisted her team with calling additional resources and completing notifications.

Telecommuter Vickie VanNorman recieved a Certificate of Commendation for her response to a call involving a male making suicidal threats. Casper PD explains as follows:

In February of 2019, a 911 call came in from a female reporting that her boyfriend was making suicidal threats. The male was standing by the front door of the residence and the female was inside.

Telecommunicator VanNorman was prompt in gathering information about the male from the caller, while simultaneously adding a call for officers to respond. During the call the male re-entered the residence through the back door and was speaking to the female when Vickie asked to speak to the male directly.

She stayed on the line with the suicidal male for 10 minutes while officers responded. She was able to keep him calm and explained what was going to happen when officers arrived. She advised the male to place the gun into his vehicle and to remain outside of it. She told him to make sure that his hands were visible and kept his attention on her until officers arrived.

In addition to the Certificates of Commendations, the police department said that Amanda Munoz received the “2019 PSCC Employee of the Year” award. They explained Munoz’s selection as follows:

Amanda Munoz has taken on a lot of additional responsibilities this year, over and above the chaotic work of regular dispatch.

She was chosen as and accepted the positions of Terminal Agency Coordinator (TAC) and Communications Training Officer (CTO). The TAC position is responsible for training new NCIC users, maintaining certifications for current users and ensuring that PSCC and all of its associated user agencies abide by all FBI guidelines for use of the NCIC system.

Amanda has been devoted to learning all of the additional duties that are now required of her and has implemented improvements to existing NCIC training programs as well as creating remedial training opportunities from scratch. Her growth has been incredible and her dedication inspiring.

The CTO position requires patience, resourcefulness and creativity and Amanda has delivered on all aspects of this position. She has provided calm assurance and steady guidance to new dispatchers, who thrive with her assistance. As with the TAC position, Amanda learned everything she could and still constantly looks for ways to improve herself, in order to train valuable new employees.

Amanda has also taken the lead on a recruitment committee dedicated to getting information about telecommunicators out to the public in hopes of recruiting new trainees. She has attended informational sessions at a local high school and participated in job fairs as well in this capacity. In all of these facets, Amanda has represented PSCC commendably, displaying professionalism and patience at all turns. Excellent work.