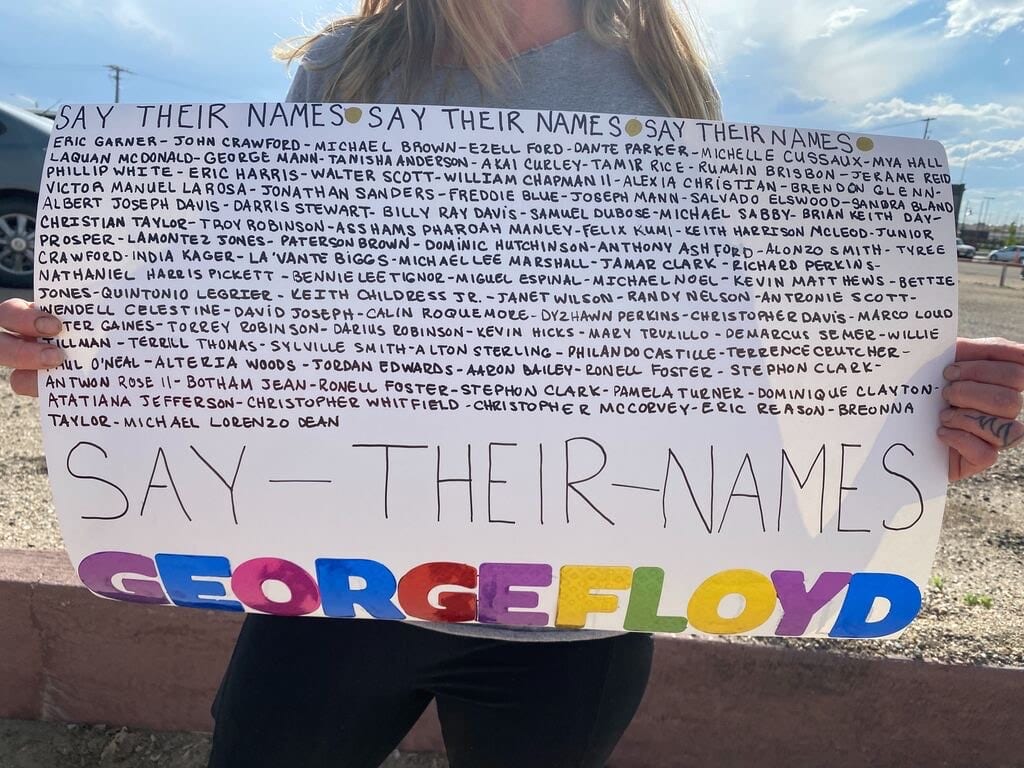 A marcher holds up a sign listing the names of victims of police brutality on Friday, June 5 in downtown Casper. (Oil City staff)

CASPER, Wyo. — People participating in a Friday march and vigil for George Floyd and every victim of police brutality have begun to arrive in downtown Casper.

Meeshla Bovee, 15, participated in Wednesday’s demonstration and also spoke during those events. She said on Friday that she was pleased with Wednesday’s event, but thinks Friday’s will have a somewhat different tone.

“I think it went really well,” she said. “I am glad at the turnout and I am glad that it was peaceful for the most part and I really enjoyed seeing Casper come together.”

“I hope that we attain peace and we get an understanding out of this. But I also know that this will be a more reflective tone compared to Wednesday’s protest.”

Friday’s march and vigil are set to begin at 6 pm and were organized by local members of the Pikes Peak Southern Leadership Conference. Organizers have asked that people disperse after a moment of silence is held at the conclusion of the vigil, which they don’t call a protest.

They ask that people return home for private prayer, meditation or reflection.

Charges against Derek Chauvin, the Minneapolis police officer who kneeled on Floyd’s neck and back for several minutes, have been upgraded to second-degree murder and charges will be pressed against three other officers at the scene, the Associated Press reported Wednesday.

“I think the charges are accurate now,” Bovee said. “Saying third degree [murder], it suggested that it was an accident and I don’t think that any of it was an accident. You can’t be there for 8 minutes and 46 seconds and say ‘oops.'”

“At the moment, I think we’re kind of going backwards, not necessarily in Casper but just around the country and I would love to see us moving forward in Casper,” she said.

“I really liked hearing from them and I support their messages,” she said.

Bovee said that she thinks the message is beginning to get across that American citizens won’t tolerate excessive force from police officers and will hold them accountable.

“I think police will start noticing that people are done with the silence and with it not being shown on what they are doing,” she said.

Reporters on scene said that around 5:30 pm Friday, the crowd appeared smaller than the amount of demonstrators who gathered Wednesday. Armed civilians were again scene in the area as they had been seen on Wednesday.

While some of these civilians told reporters using aliases such as “No Show” on Wednesday they were there to “protect” demonstrators, several people wishing to remain anonymous told Oil City they didn’t ask for these people’s protection.

They noted that these armed civilians are not accountable to the public like police are and have not undergone police training, such as being sprayed in the face with pepperspray to know what that feels like.

Multiple people reported feeling intimidated by these armed civilians, wondering what they would consider as a “shootable offense.”

Other participants on Friday had prepared signs with messages for Friday’s march and vigil: