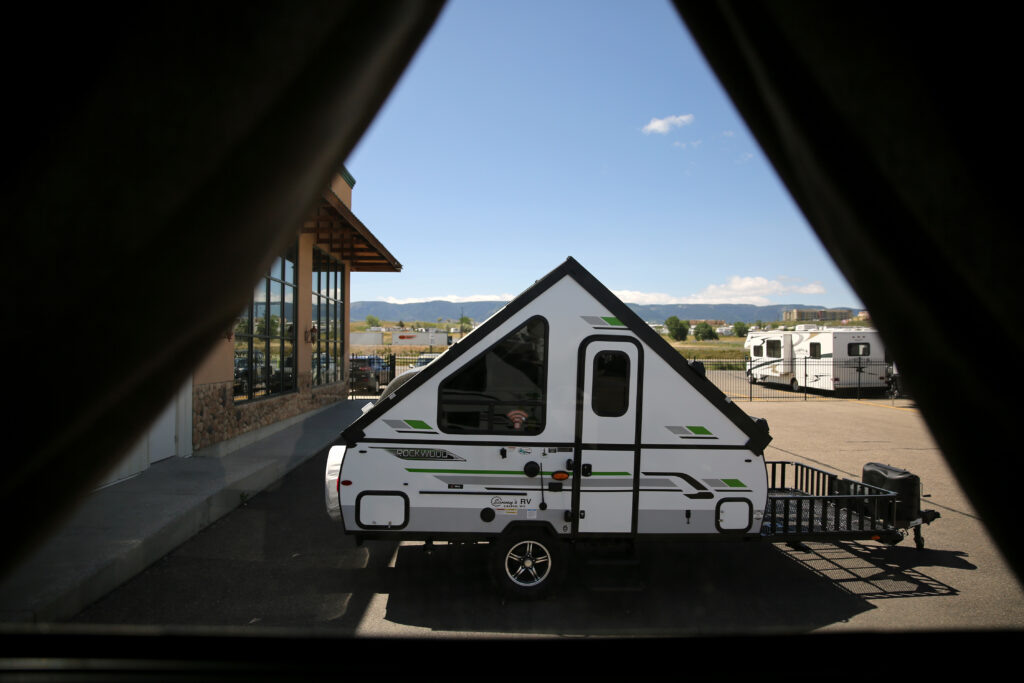 A new Rockwood pop-up RV is seen through an RV window at Sonny’s RVs in Evansville. (Dan Cepeda, Oil City)

CASPER, Wyo. – With fewer leisure options available in the COVID era, more people are turning to the outdoors and recreational vehicles.

It’s the first time Chris Stanek has seen this kind of a market in his more than three-decades of RV sales experience.

Stanek, who works at Sonny’s RVs in Evansville, says the dealership has been packed with customers, many of them first-timers.

“People aren’t flying, they aren’t traveling out of state,” he said.

However, they are looking for safe vacation options, and with Wyoming’s outdoor attractions opening back up, people are swarming into RV dealerships.

The trend is nationwide. According to Business Insider, RV orders are up dramatically among major manufacturers, and an estimated 46 million Americans will take an RV trip in the next year, according to the RV Industry Association.

During his live online briefing earlier recently, governor Mark Gordon said the camping and RV industry is one of Wyoming’s brightest spots in an otherwise dismal economic outlook.

While hotel occupancy remains soft, “eight of our state parks saw an increase in April and May,” said Gordon, giving much of the credit to RV owners hitting the road in Wyoming.

Supply for RVs is extremely tight. Stanek says anything in the $10,000 range and used vehicles are most difficult to buy now. Smaller units are also popular and in very tight supply.

“People are pulling these units with smaller vehicles,” he said, likely being most first-time buyers who never had to think about towing capacity when they purchased their vehicles.

Large bunk models are also popular, particularly with older people who want to bring kids and grandkids along.

In the past, many first-time customers might choose a pre-owned unit, but since so many people new to the hobby want in there are scant units getting traded in. Stanek said supplies are tight everywhere, and people are coming from other states looking for RVs in Wyoming.

“With the virus shutting down factories for 60 to 90 days, our flow of inventory has really been diminished,” he said. “The product that we ordered in August last year for March and April deliveries haven’t even arrived yet.”

The market shift has been a surprise for Stanek, who a few months ago was looking at inventory he feared would not sell as everything was shut down by the virus.

“May was on fire,” he said concerning sales, “and all it was was opening the state’s parks so people could use their campers.”

“People aren’t flying, they aren’t staying in hotels, but with an RV you know who slept in the bed last night.”

Stanek is happy to see excitement in the RV market again, and he doesn’t believe there will be a glut of unwanted units in a couple of years as the virus hopefully gets under control.

“I think they’re hooked,” he said.