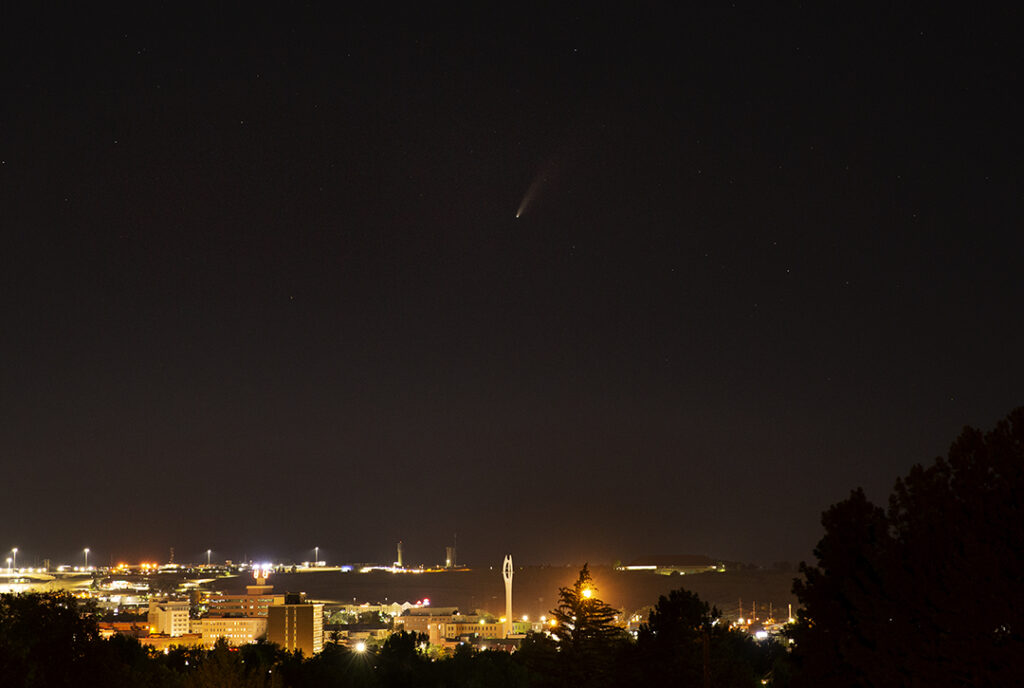 Comet Neowise is seen streaking far above downtown Casper in a view from Washington Park on late Thursday, July 15, 2020, in Casper. The newly-discovered comet will be closest to Earth in about two weeks, according to NASA. (Dan Cepeda, Oil City News)

According to the Associated Press, Comet Neowise — the brightest comet visible from the Northern Hemisphere in a quarter-century — swept within Mercury’s orbit a week ago. Its close proximity to the sun caused dust and gas to burn off its surface and create an even bigger debris tail. Now the comet is headed our way, with closest approach in two weeks.

The comet is named after NASA’s Neowise infrared space telescope after it discovered the comet in March.

NASA says the comet is about 3 miles across, and its nucleus is covered with a sooty material that dates back to the origin of our solar system, about 4.6 billion years ago.

The comet will be visible across the Northern Hemisphere until around mid-August before it heads back to the outer solar system, says NASA. It won’t be visible again from Earth for about 7,000 years.

In Casper, it’s faintly visible with the naked eye even with the city’s light pollution. Out in empty parts of the state it’s clearly visible. Binoculars and telescopes are helpful to see its long tail.

The comet becomes visible in the northwest sky between 10 and 10:30 p.m. as the sky darkens. These images shot from Washington Park were made using long exposures ranging from 2 to 5 seconds.