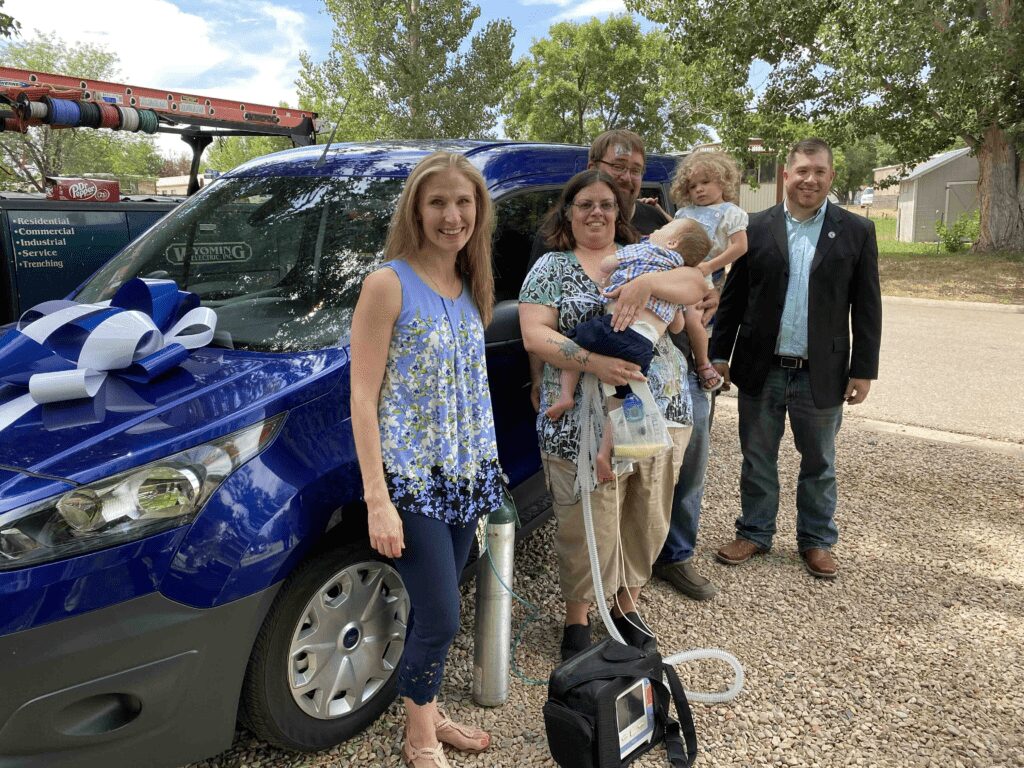 CASPER, Wyo — A Sheridan family who had their handicap-accessible van stolen in Denver while their two-year-old special-needs son was receiving critical medical treatment received a replacement vehicle on Friday, July 24 from Cowboy Skill Games of Wyoming, according to a release by Wyoming Amusements.

Ira and Yvonne Fischer take their two-year-old son Lane, who has Downs Syndrome, to Denver multiple times a year to receive critical medical treatment. The stolen 1996 Chevy van had been specially outfitted with medical supplies and equipment.

“It is heartbreaking that someone would even think to take, even if it wasn’t his, any handicapped vehicle,” Yvonne Fischer told Denver TV station KMGH. “I just don’t understand.”

Leslie George, co-owner of Wyoming Amusement in Sheridan, said she was heartbroken when she heard about the plight of the Fischer family who were left stranded in Denver.

George said she immediately called her colleagues at Cowboy Skill Games in order to raise money to buy a replacement vehicle.

“We just had to step up and do something for this dear family,” George said. “But that’s what we do in Wyoming. We help each other.”

“Through the help of the AutoFarm Castle Rock car dealership in Evanston, Wyoming, George was able to find an already-upgraded handicap accessible van in Indianapolis” the release said. Midway Auto & RV  in Worland volunteered to fly out to Indiana to drive the van back to Wyoming.

Another Wyoming car dealership, Fremont Motors in Sheridan, then offered to pay for a year’s worth of Fremont Care service maintenance.

George said the gift to the Fischer family is emblematic of what the companies of Cowboy Skill Games do.

“We’re a tight group of Wyoming families who have been here for a long, long time,” George said. “We love Wyoming and our Wyoming people.”

Yvonne Fischer said he was stunned when George called and told him about the gift.

“We were shocked. I couldn’t believe it,” Fischer said. “Thank you Cowboy Skill Games from all of our family. We are just so thankful that we can get both of our twins safely to our weekly doctors’ appointments.”