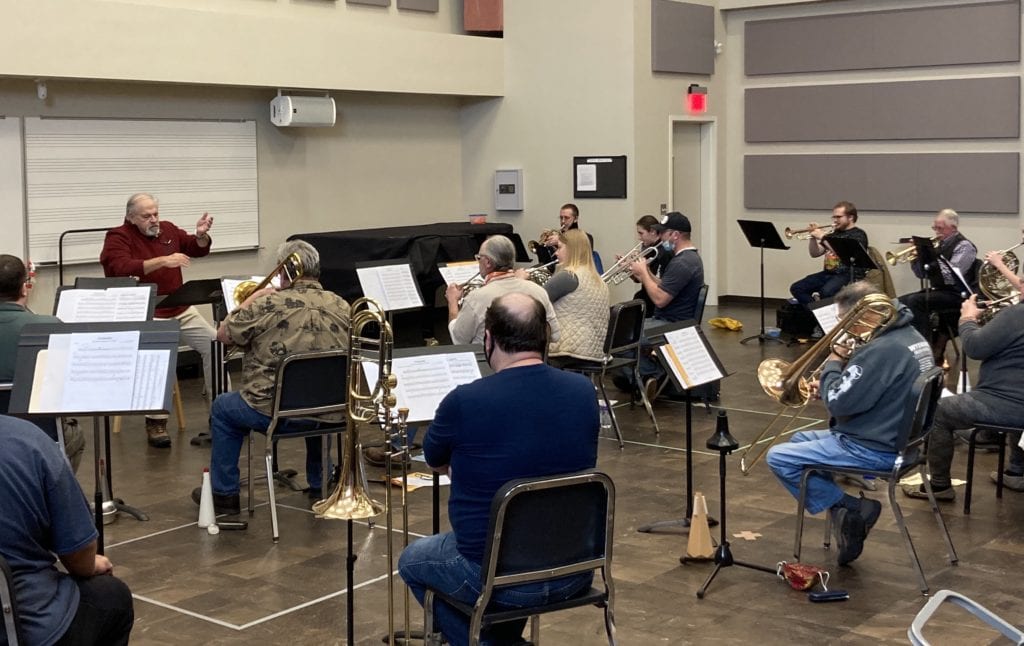 CASPER, Wyo — “First of all, you’ve got to love the sound of brass,” said Nathan Baker, professor of music theory, composition, and low brass at Casper College.

“Throughout the history of orchestra, when you want people to jump up and give a standing ovation, you bring the brass in,” he added.

Baker is the principal trombonist for the Casper Brass and Stormdoor Company led by Douglas Bull. The company will perform Sunday, Jan 24 at Wheeler Concert Hall at Casper College at 4:00 p.m.

He spoke to Oil City News at a rehearsal Saturday.

The company features 17 brass players from the Casper area, including seasoned professionals and Kelly Walsh all-state performers. The players include Bull’s former students and fellow CC instructors, all Casper-based.

“This is Casper Brass for real,”  Bull said.

Bull taught at Casper College from 2006 to 2018, serving as chair of the music department and director of bands.

His storied career spans back to the early 60’s, recording with the RCA Recording rock band “The Lafayettes.” He’s played on musicals, movie soundtracks, and commercials. He’s played, conducted or recorded for acts such as Bob Hope, Frank Sinatra, Barbara Streisand, Tom Jones and Aretha Franklin.

Bull also served in the United States Army as a lead trumpet player and soloist in Europe.

Sunday’s performance will feature a range of styles and eras including, opera, folk, military march, and ragtime, all arranged for brass by Jari Villanueva.

Recognizable pieces include the overture to the opera “Barber of Seville,” which some may recall from a particular Bugs Bunny cartoon.

“A lot of people are introduced to classical music through Looney Tunes,” Bull said.

With Villanueva, Baker said, “We’ve got a fantastic writer here that has written a combination of things that lie well on the horn.”

“If you spent your years practicing scales and articulations, it comes out very nicely; it’s very clean writing. There are some spots that the notes fly by pretty quickly,  so you just have to be in time and let the air take the notes out of the horn.”

At a rehearsal Saturday, Bull sprinkled in anecdotes from his career between rhythmic critiques. On performing the precise syncopations of ragtime, Bull said, “Don’t be a ‘jazzer.’”

He also gave notes such as, “No blasting, please,” and “Make sure you have your ta-tas in order.”

Bull recalled getting a lot of work when composer Marvin Hamlisch singled him out for his exemplary ragtime chops.

“Once you learn, those styles come back immediately,” Bull said. “You never lose it.”

Abby said playing with the company has allowed her learn from more seasoned performers and play more challenging material.

She was particularly impressed that he’d toured with Bernadette Peters and Archibald Sandoval. She said she picked trumpet because she hadn’t seen a lot of women playing the instrument. Her choice was solidified when she met Bria Skonberg at the Kinser Jazz Festival

Cameron, who was inspired to play french horn after hearing “Star Wars,” said he’s also rising to meet the challenge of the company.

A PDF of the full Artcore 2020-2021 season can be downloaded here. Updated schedules can also be found on the organization’s website.