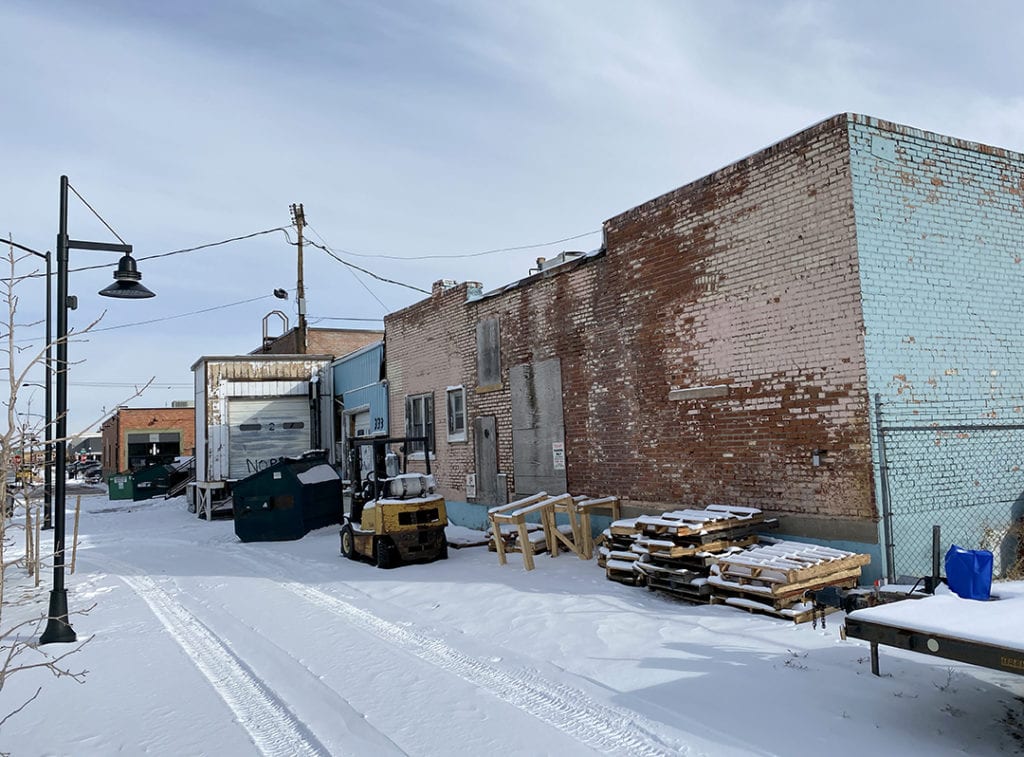 The Pacific Fruit & Produce Co. Building on W. Midwest Ave. is next to what is now Urban Bottle and Racca’s in the Old Yellowstone District. It was recently purchased by Midwest Urban Development, an LLC partially owned by True Land and Realty. (Dan Cepeda, Oil City)

CASPER, Wyo. – A weathered historic warehouse building in the Old Yellowstone District could potentially become another jewel in a series of redeveloped properties along the trendy district.

The entire complex on that block was originally part of a sprawling combination of warehouses for business and importers that operated near what was then rail yards in the early to middle 20th-century.

Redevelopment of the century-old complex started in 2014 with business partners John and Lauren Griffith and Art and Lynette Boatright, who have since sold the property. Art 321 eventually moved into the building near Collins, and Racca’s and Urban Bottle opened in the adjacent buildings along Ash. St. The Griffiths will continue to own and operate Urban Bottle, according to John Griffith. Racca’s is owned and operated by Mark Dym and Kristy Latorraca Dym of Denver, who operate other popular pizza and Italian restaurants in trendy areas along the Colorado Front Range.

Midwest Urban Development (MUD) is an LLC owned by Jennifer True, with an ownership interest by True Land and Realty, according to Salvin. Jennifer True was formally a partner in the Urban Bottle business, but sold her interest some time ago, said Salvin.

“MUD had an option on that building for quite some time, and it decided to exercise that option,” he said. MUD already owns the building occupied by Urban Bottle and Racca’s, and the purchase of the Pacific Fruit Building took place in December, 2020.

The building has most recently been used for storage by Magic City Stoves & Fireplaces.

Salvin said development plans for the building haven’t been “fleshed out” at this point, but that MUD feels the building “certainly has potential.”

Salvin said the two buildings “are the extent of MUD’s holdings.” However, True Land and Realty owns significant nearby properties, including a historic former Toyota maintenance building now occupied by Flowstate. Additionally, last year they took over development of The Nolan from FLAG Development after initially investing in the redevelopment project. The former Nolan Chevrolet building is currently being transformed into a mixed-use development that will include housing, retail and entertainment.

The nearby state office building is quickly taking shape and should be completed later this year, which many expect to bring more people to the area on a daily basis.

Salvin didn’t elaborate on any goals, tentative plans or timelines for the property, but expressed the company’s optimism in the area.