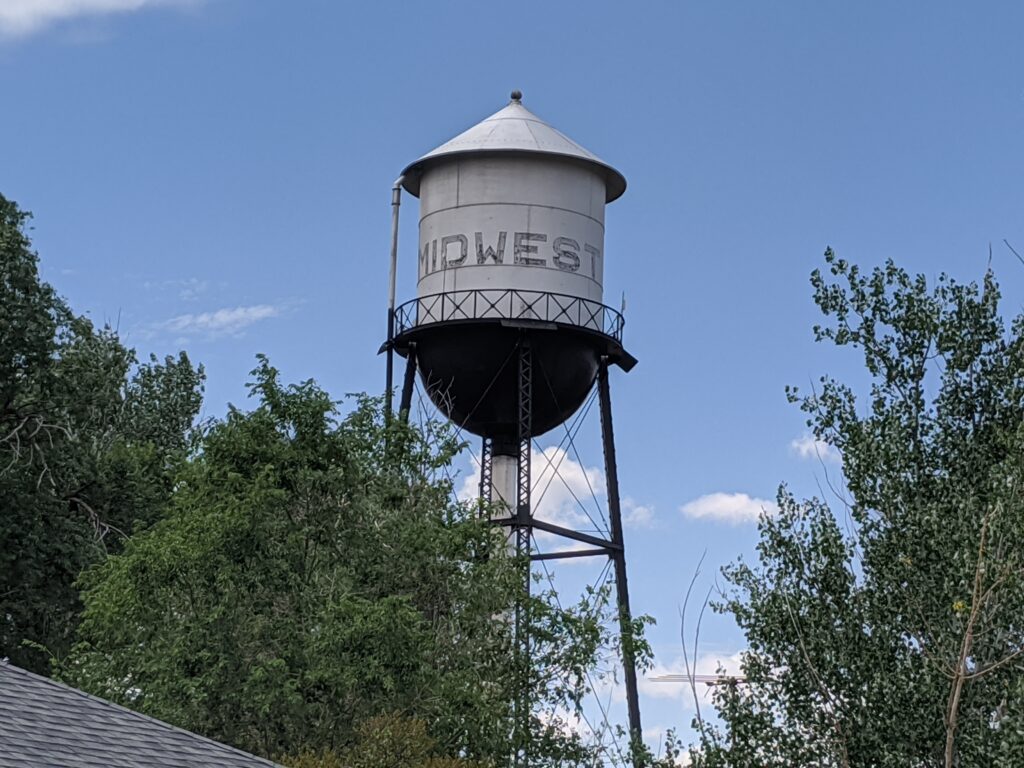 That’s one reason Natrona County is talking about holding a special election asking voters to consider supporting a temporary “sixth cent” sales and use tax.

Between Midwest and Edgerton, Salt Creek Joint Powers Board Clerk and Treasurer Michelle Gibbs said Thursday that about 700 people reside in the area overnight. But with oilfield activity in the area, she said there are about 1,400 people during the day on a busy day.

A water pipeline pumping in water to Midwest and Edgerton from the North Platter River is the area’s only source of drinkable water, and is important to residents, Midwest School as well as oil companies and workers operating in the area.

“Oil and water do mix in some situations and this is one of them,” King told the Casper City Council.

Using a conservative estimate, oil produced out of the Salt Creek Field has generated at least around $20 million in tax revenues for the state and Natrona and Campbell County during that 2016-2020 period. (See below for note on this estimate).

A roughly 7 mile stretch of the water pipeline running through the Salt Creek field is in need of replacement, frequently facing corrosion issues, according to Gibbs.

“For the last five years, we’ve had a huge problem with leaks in that area,” Gibbs said. “Two areas ago we spent $60,000 on just leaks. We can’t afford that consistently.”

Prior to 1997, the Town of Edgerton used to get water from a well, but that water was deemed unsafe to drink. The existing pipeline serving Midwest and Edgerton was put in in 1997 under an agreement with the Central Wyoming Regional Water System.

It is not the entire pipeline bringing water from the North Platte to the area which is facing corrosion issues, but specifically the roughly-seven mile stretch running through the Salt Creek Field. Gibbs said there are contaminants in that soil. For that reason, the pipeline material is not PVC but rather ductile iron with concrete around it.

Corrosion leads to pitting of the concrete and eventually leaks in the pipeline, Gibbs said. The Salt Creek Joint Powers Board is a body that addresses issues for the Town of Edgerton and the Town of Midwest under one roof. Gibbs said that they have worked with the Wyoming Water Development Commission to have studies conducted to figure out how to address the water needs of the community.

Gibbs said that an exploratory Level 1 study which aimed to see if there were alternative water sources that would avoid the problem with the existing pipeline revealed no promising alternatives.

She said that they then moved up to a Level III study with the Wyoming Water Development Commission which are studies to design projects and make them happen.

Gibbs said that amounts to roughly $2 million. One concept which is being discussed in Natrona County is to ask voters to support a temporary “sixth-cent” optional sales tax to generate the funding to ensure the water line project gets done and Midwest and Edgerton have a reliable source of water for the next 25-30 years.

The proposed “sixth cent” sales and use tax would be a temporary tax and would only be imposed as long as it takes to raise enough funding for specific projects like the water pipeline for Midwest and Edgerton.

The water pipeline replacement likely wouldn’t be the only project voters would be asked to consider supporting under the proposed temporary “sixth cent” tax. The other project the Natrona County commissioners and town and city councils have been talking about in recent weeks is completing the reconstruction of Midwest Avenue between Walnut and Poplar Street in Casper. The “sixth cent” for that project would provided about $2.3 million to the City of Casper.

Together, the roughly $4.3 million between the two proposed “sixth cent” projects could take just a couple months to raise. Natrona County has seen about $16-18 million in “fifth cent” optional sales tax collections in recent years, according to Casper City Clerk Fleur Tremel.

The “sixth cent” would be imposed on a quarterly basis until enough funding is raised for the projects, Tremel explained. Depending on how robust sales are in the county, the sixth cent tax might last only one quarter of the year and likely two quarters at the most.

Some in the public have expressed concern that the “sixth cent” would become permanent if approved but that is not allowed under Wyoming State Statute. The “sixth cent” can only be imposed for specific voter approved projects.

Who would pay that extra 1% sales and use tax that would be imposed if voters approve the proposed “sixth cent” in November?

That would include people living out in Midwest and Edgerton whenever they make purchases in Natrona County. It would also include the hundreds of oil workers who commute back and forth from Casper to the Salt Creek Field and other operational fields in the Midwest and Edgerton area.

King told the Casper City Council that they should keep in mind that those oil field workers as well as people living in Midwest and Edgerton contribute to Casper’s economy when they come into town and spend money.

“Everybody [who works in the oilfield] gets paid on payday in their white pickup from [Fleur de Lis Energy] and drives back into Casper, spreads it out among you folks,” King said.

Gibbs noted that Midwest and Edgerton leaders are looking at other ways to ensure they have enough funding to complete the water pipeline replacement. The Salt Creek Joint Powers Board are preparing a grant request to ask for support from the State Loan and Investment Board. They are also looking into possible federal funding support from the Clean Water State Revolving Fund, funding administering by the U.S. Environmental Protection Agency.

Edgerton and Midwest officials have pointed out that residents of their towns have contributed to “fifth penny” revenues that have benefited Casper and other Natrona County municipalities over the years.

Gibbs said she thinks the “sixth cent” temporary special purpose tax is worth people’s consideration: “We should all work together,” she said.

The Casper City Council on Tuesday indicated they are willing to put their weight behind the concept.

Note: The exact tax revenue picture generated from a particular oil field is difficult to calculate because of the complex mix of county, state and federal tax factors involved. After speaking with multiple state employees, Oil City is confident in reporting ~$20 million/year as a quite conservative estimate of the tax revenue generated for the state, Natrona and Campbell County (since the field is not only in Natrona).

Here’s an oversimplified way of looking at things: When oil is at $60 per barrel, that results in about $7.20 in severance tax and “ad valorem” property tax revenues generate per barrel produced. That is including the 6% severance tax imposed based on the fair market value of oil produced and a 6% “ad valorem,” or property tax, based on mineral production that occurs within a county. That tax rate varies by county but across Wyoming averaged around 6.28% in 2019.

The average price of oil per barrel in 2019 was around $52/barrel. In 2020, it was around $43/barrel. Using the oversimplified “per barrel” approach described above, 6% severance tax revenues plus 6% ad valorem tax revenues generated by production at Salt Creek in 2019 and 2020 would have been:

Note that the picture looks different when oil and gas is produced on federally owned land, which would impact the estimates for Salt Creek production. The state receives about half of all royalties paid to the federal government for leasing, oil production on fees on federal land. While the formula looks different when federal royalties are involved, it would increase the tax revenues for the state. In short, the ~$20 million/yr estimate for tax revenues generated from oil production at Salt Creek from 2016-2020 is a conservative estimate.