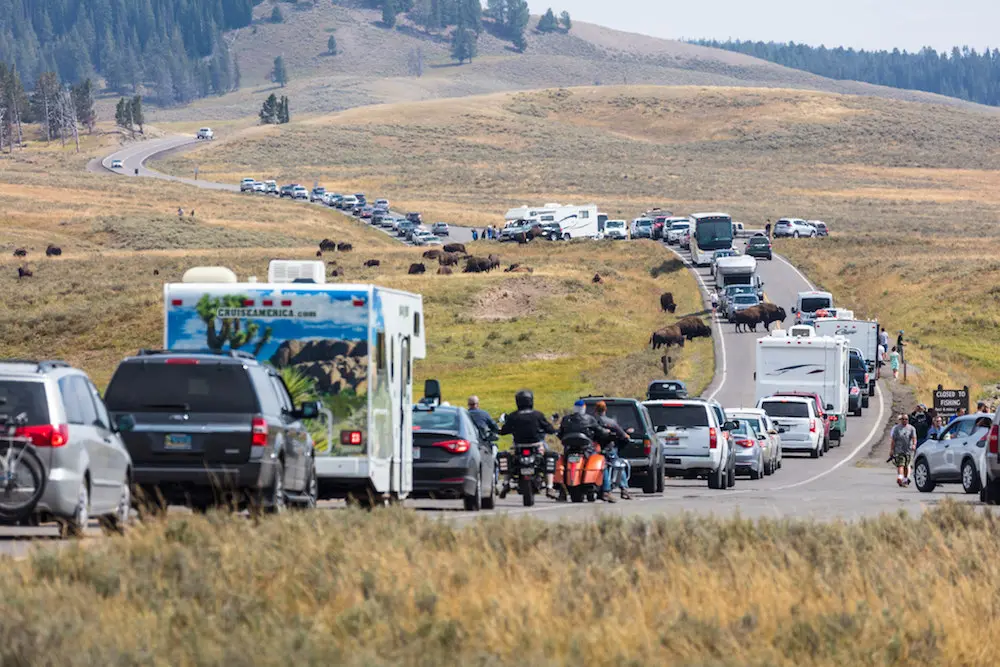 Campsites, trailhead parking spots and outdoor reservations in Wyoming will likely be harder than ever to snag this summer as public land managers expect an even larger flood of visitation than 2020’s.

Predictions for a huge visitation season, which are already bearing out in unusually large spring numbers, come at the confluence of two trends. The first is a global rise in outdoor recreation — with activities like camping, national park tours and RV travel booming in the last decade. The second is the COVID-19-related push to spend time in the safety of the outdoors. That trend is expected to accelerate in coming months as the weather warms and pandemic restrictions further loosen.

“I think it will be a record year by far,” said Yellowstone National Park Superintendent Cam Sholly, who predicts that somewhere around 4.5 million visitors will stream into the iconic park — 700,000 more than in 2020. The park began opening its gates on April 8 and experienced the highest April visitation ever. April’s record came on the heels of record visitation in September and October last fall. Neighboring Grand Teton National Park saw similar trends.

While public land officials say they welcome the new diversity of folks getting outdoors, last summer demonstrated that too many users can bring negative impacts like improperly disposed waste, unmanned campfires and human conflicts. Managers in some spots in Wyoming will implement new systems in 2021 in an attempt to manage crowds.

“We’re hearing that things look to be even crazier this summer than they have been … everything seems to be way up,” economist and Jackson Town Councilor Jonathan Schechter said during a recent virtual Charture Institute conference on tourism in the Jackson region. “It should be from a dollar perspective a hugely successful summer. But the question is: at what cost?”

Wyoming tourism as a whole took a blow in 2020 as COVID-19 impacted traditional service providers like hotels and restaurants. The state saw a 23% decrease in travel spending, a 21% decrease in tax revenues and about 25% fewer person trips over 2019, according to a new economic impact report conducted by Dean Runyan Associates.

But Wyoming didn’t fare as badly as the rest of the U.S. travel economy, which sagged by 36%. Visits to the state’s outdoor attractions may have largely accounted for the difference.

From national parks to reservoirs to hiking trails and free campsites, the state’s outdoor spaces saw enormous visitation spikes in 2020.

Even Boysen State Park, a lower-profile destination than its southern neighbors, saw a 136% visitation increase in 2020 over its five-year average.

Despite COVID-related closures of historic sites and temporary ban on out-of-state reservations, “we had quite a significant increase” of use, said Nick Neylon, deputy director of the Outdoor Recreation Office & Division of State Parks.

“All of the forests across the state experienced record visitation levels this past year and the record visitation resulted in impacts,” Bridger-Teton National Forest Public Affairs Officer May Cernicek wrote in an email.

The same goes for national parks. At Devils Tower National Monument, recreation visits from September 2020 through April 2021 were up 46% over the five year-average for the same period, according to the National Park Service. “The visitation trend is expected to continue throughout the summer season,” a May 6 press release said.

All this falls in line with expanding outdoor travel nationally spurred by COVID-19. Camping in America grew 28% with 7.9 million additional participants in 2020, according to the Outdoor Industry Association. The same year, 8.1 million more Americans hiked than in 2019, OIA reports.

With no indication that the trends will soon slow, public land managers are beginning to contemplate how to mitigate the negative impacts of huge visitation.

While they embrace new users and welcome them to discover the outdoors, they say, last year’s surge also resulted in unhappy campers, user conflicts and in some cases, resource damage.

Bridger-Teton National Forest Supervisor Tricia O’Connor, who was a panelist at the Charture Institute’s recent tourism conference, said that on the BTNF — where camping demand has been widely publicized — the issue isn’t necessarily overuse across the entire 3.4-million-acre forest.

“The issues really were around distribution of users, we saw much more excessive use around this corridor around our boundary with Grand Teton National Park, but also in the Wind River Range,” O’Connor said.

That high demand in certain areas was exacerbated in some instances by unrealistic expectations and general unpreparedness, she said.

“People really did expect they could drive into this area at 6 o’clock or 10 o’clock at night and find a campsite, and they couldn’t,” O’Connor said. There were also lots of first-time campers, O’Connor said, who “really had no idea about things like sanitation, campfires and food storage.”

The results ranged from people camping outside of designated sites to food storage violations, improperly disposed of human waste and unattended fires — 280 were reported in the north end of the forest, she said.

“That’s a lot,” O’Connor said. “Luckily we didn’t have any major fires as a cause of that, but this year I’m really concerned about that.”

On top of that, she said, certain users were rude to others and to rangers. “We did see a fair amount of just disrespect and poor behavior.”

In Curt Gowdy State Park, Neylon said, mushrooming attendance prompted managers to transform two areas that had been naturalized into parking lots to accommodate use.

And in Yellowstone, where major attractions like Old Faithful have long drawn huge crowds, in some corridors “it’s just pure gridlock in certain months of the year, certain days of the week,” Superintendent Sholly said.  In addition, he said, shoulder-season months that were once quiet have become much busier.

Some public lands have instituted changes in an attempt to smooth out the issues caused by huge demand.

“What we were finding was, it was like a race to the campsite every morning,” Sholly said. “And some of our major campsites that were first-come first-served, you know, you’d have lines that were developed at like 5 o’clock in the morning. People wanting to get a site, and then people really irritated that they couldn’t get a site.”

Public feedback prompted managers to make the change so that users could plan trips with more surety, he said.

“It also alleviates a lot of problems that stem from people coming in and not finding a campsite, because [then] they start trying to camp all over the place,” Sholly said.

Yellowstone is also launching a pilot shuttle service this summer in the busy Grand Canyon area as a way of exploring potential methods to alleviate traffic. And it will be closely monitoring the heavily trafficked areas such as Norris, Midway Geyser Basin, Old Faithful and Mammoth to determine the feasibility of other efforts.

“Those are areas that we have a very high density, traffic and people volume, and that we need to really think about how we’re going to manage both for protecting resources and preventing resource impacts from the standpoint of congestion and visitor experience,” Sholly said.

Wyoming State Parks went to a 100% reservation-only system in 2020, but the agency has reverted about 20% back to first-come, first-served in response to feedback, Neylon said.

The fee increase was in response to a $1.1 million budget reduction — part of statewide budget cuts made last year to address a fiscal shortfall. Neylon said the fee increase is projected to make up the difference. But it also brings up another issue across public lands: Even as they are experiencing significant user growth, federal and state agencies have long struggled with limited budgets.

To alleviate impacts, Wyoming land managers are relying heavily on educating visitors to plan ahead, keep expectations realistic, be better stewards of the land and wildlife and be more considerate of one another.

In 2020, “we learned that communicating around Responsible Recreation may help to address those impacts and widespread messaging with and through our partners is extremely helpful in this respect,” BTNF spokesperson Cernicek wrote.

Her agency is using #recreateresponsibly and www.recreateresponsibly.org to share information with the public, she wrote. That message is being touted across the state; The Wyoming Office of Tourism will launch its second summer of the WY Responsibly campaign June 1.

In other areas of the U.S. dealing with overuse, land managers have implemented new permit systems or even closed trails. Shoshone National Forest Public Affairs Officer Kristie Salzmann hopes that the situation in Wyoming does not warrant those types of measures.

“Right now, we are hoping that the need for any of that doesn’t come to fruition,” Salzmann wrote in an email. “We are focusing on education right now to ensure we do the best we can to get out information about things that make the Shoshone National Forest unique …” such as food storage and fragile vegetation.

O’Connor, however, hasn’t ruled out limits.

“I would say, you know, in a nutshell, clearly there are places for limits, and I don’t want to say that limits aren’t something we should be thinking about,” she said during the virtual conference. “But we really do need to focus on some of those other factors first.”

With the BTNF’s current inventory, she said, “there’s much more demand for camping than we can provide. I go back to … we’re not serving people, if we encourage them to come but there’s really no place to stay.”

Sholly said data collection this summer in Yellowstone will be an important tool in planning to accommodate larger crowds.

He noted that when the National Park Service launched its “Find Your Park” campaign around 2013 in the lead-up to the NPS centennial, it yielded enormous results.

In many ways, Sholly said, “we weren’t prepared as a system to handle an extra 50 million people within a short amount of time like that. And so what you’re seeing now, and then you throw COVID in the mix … is more of a reactive approach to try and manage increasing visitation instead of a strategic approach.”

Sholly complimented the Biden administration and said many national parks are taking meaningful steps to deal with their increasing popularity.

“I feel like we’re getting more organized and trying to deal with that massive influx of visitors,” he said. “But it’s a work in progress.”