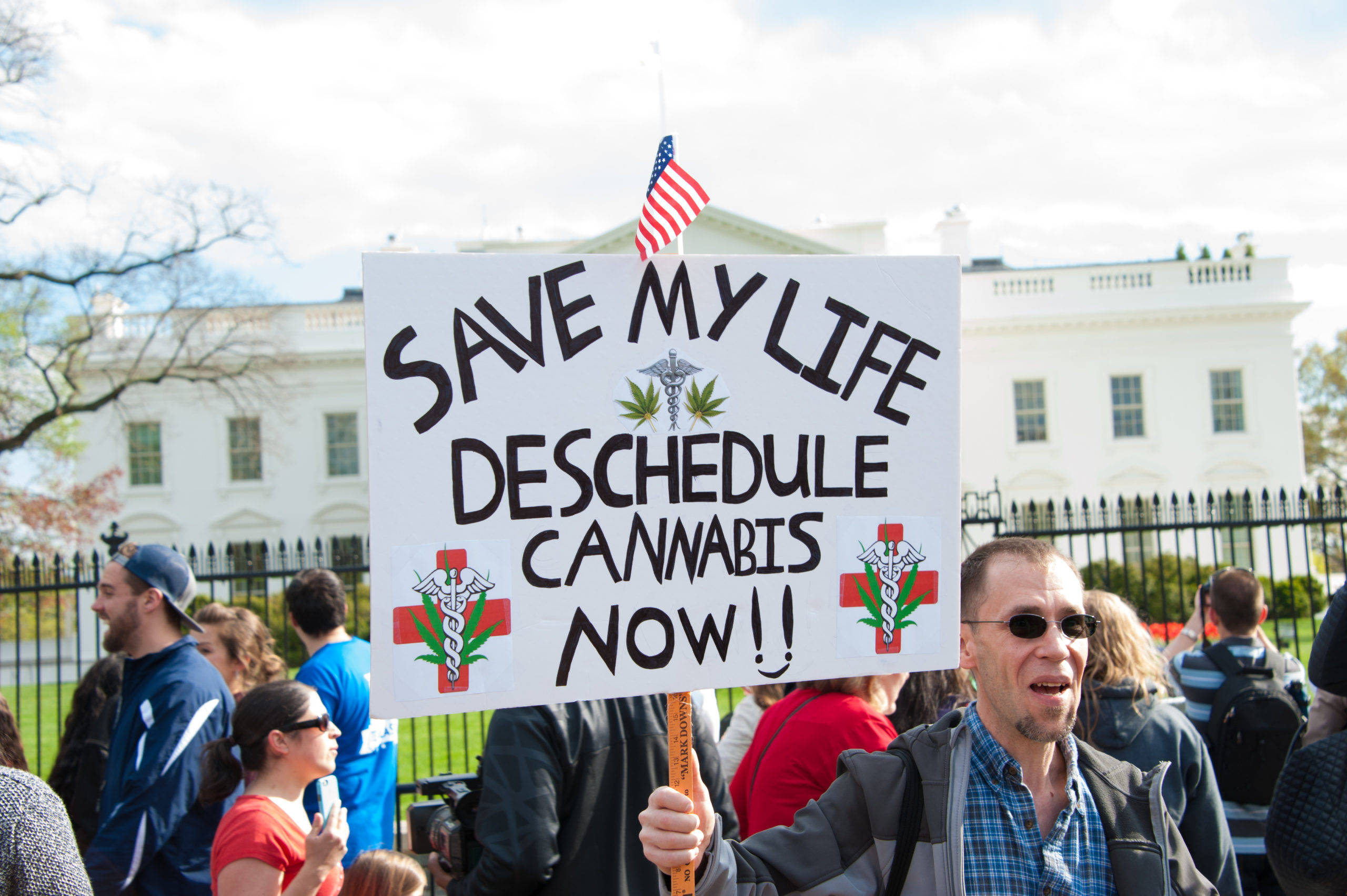 WASHINGTON APRIL 2: Protesters rally in support of the legalization of marijuana in front of the White House in Washington DC on April 2, 2016. (Shutterstock)

CHEYENNE — If things go in favor of the Libertarian Party’s efforts, Wyoming voters may have an opportunity to vote on two marijuana-related ballot initiatives in the 2022 general election.

The Libertarian Party along with a collection of community members are delivering two ballot initiatives to the Wyoming Secretary of State on Friday, June 11.

Organizers of the ballot initiatives will hold a press conference at 1 p.m. Friday, June 11 on the steps of the Wyoming State Capitol. Representative Marshall Burt, L-Green River, is set to speak during the press conference.

One of the reasons Representative Burt said he is pushing to get these initiatives on the 2022 ballots is because it is an issue of an individual’s right to access medical treatments.

“Getting veterans and patients access to treatments that have been proven to help alleviate suffering is very important to me,” Burt said. “Recent studies have shown that the effects of cannabis on the amygdala reduces symptoms caused by PTSD.”

Patients and veterans should not have to feel like criminals or medical refugees simply for using treatments.

Burt also said that he is in support of decriminalizing marijuana for personal use, as “over-criminalizing” infringes upon individual liberty.

“This is also about over-criminalizing victimless crimes and protecting liberty. Individuals should be free to live their lives as they see fit provided they are not harming others. Criminalizing trivial behavior puts unnecessary financial burdens on our corrections system, our officers, and the public,” he said.

“This year was the first year the legislation was voted out of committee (6-3),” the press release states. “Unfortunately, the legislative session year ended before the full House could take up the bill for a vote.  These ballot initiatives would allow the people of Wyoming to vote on these issues directly in the general election of 2022.”

According to a survey conducted in October by the Wyoming Survey and Analysis Center (WYSAC) at the University of Wyoming, 75 percent of Wyoming residents surveyed believed that people convicted of possessing small amounts of marijuana should not serve jail time.

The survey also showed that 85 percent of Wyoming residents surveyed supported the legalization of marijuana for medical purposes if a doctor prescribes it.

When looking at this study, it shows that the majority of Wyoming residents support the decriminalization of cannabis, and support the legalization of medical marijuana. Burt said this trend is consistent to what medical patients have expressed in his district, House District 39.

“Patients in my district have been very clear that access to medical cannabis is critical to their quality of life, and I want to help get them the relief they need,” Burt said.