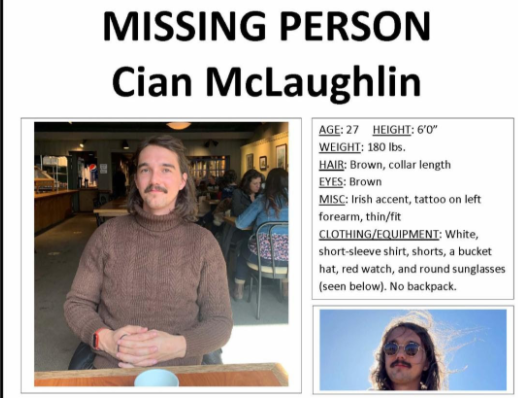 McLaughlin was last seen by a friend around 2:30 p.m. Tuesday, June 8 about a half mile away from the Lupine Meadows Trailhead. It is unknown where the intended destination of his hike was, according to the National Park Service.

“As McLaughlin’s plans were unclear, anyone who has been traveling in the Teton backcountry since Tuesday, June 8, may have seen him and are encouraged to contact the National Park Service Investigative Services Branch,” the NPS says.

“He was wearing a white short-sleeve shirt and a red watch while in his vehicle,” the NPS says. “In addition, it is believed he was wearing shorts, a bucket hat, and round sunglasses. McLaughlin also has a noticeable forearm tattoo on his left arm.”

On Tuesday, over 40 park staff conducted a ground search in high probability areas.

“Five search and rescue dog teams, members of Teton County Search and Rescue, and the Teton Interagency Helicopter have also been involved,” the NPS says.

Anyone with information regarding McLaughlin’s whereabouts is asked to contact the National Park Service Investigative Services Branch: