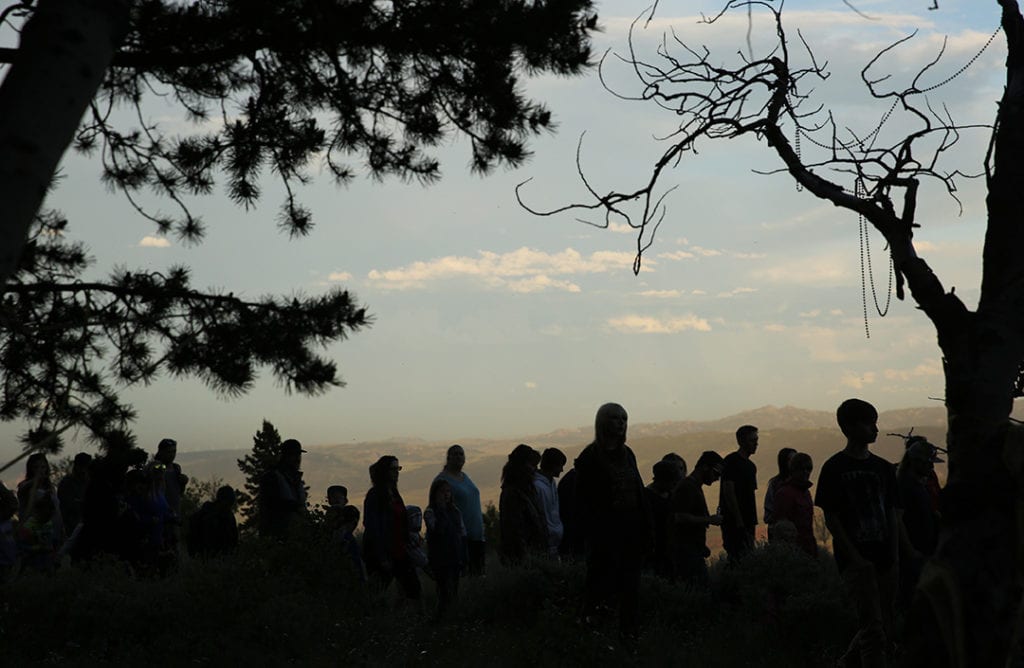 People walk to the start of the story line during the Crimson Dawn Midsummer Festival on Thursday, June 21, 2018. (Dan Cepeda, Oil City)

CASPER, Wyo — Those attending the Midsummer at Crimson Dawn celebration Monday, June 21, are advised to bring walking shoes, a flashlight, and “a sense of wonder.”

Anywhere from 200-1,000 people show up annually for the walkabout tour of the land with the local historian-folklorists who carry on the lore of homesteader Elizabeth Neal Forsling, according to historian Rebecca Hunt.

Hunt first attended the festival as a ten-month old baby, and now she’s carried on the stories as Neal’s stand-in for 30 years. This year she’ll have her own apprentice.

The annual celebration began in 1931, and coming to it is a tradition three or four generations deep for some families.

There are veteran performers as well as newcomers portraying characters from the seven witches to the blind musicians transported from the Middle Ages, and also Sean the Leprechaun.

“They’re stories of loss and hope, caring for the land and caring for each other: very human stories,” Hunt said.

It’s unsure yet whether conditions will be right for at the traditional bonfire. Forsling lore says that among those who toss a handful of red dirt into the fire,  someone will have a wish granted. If there is a bonfire, Casper Mountain Fire District will be on hand to manage it, Hunt said.

Hunt said people tend to focus on the “New Age-ey, pagan” elements of the aesthetic, but that Neal’s nearest tradition was probably Henry David Thoreau and the Transcendental Movement of American literature.

“The first time Neal walked out of the woods and looked across at Muddy Mountain and the butte, she said she felt like she had walked out the woods onto the edge of an ocean.”

Hunt is working on a biography of Neal, largely informed by her access to a 400-page memoir. She’s also curating an exhibit of Neal’s art for the Nicolaysen Art Museum, to open in September.

Hunt said Neal was a prolific creative, a Renaissance learner, and an environmentalist who worked on restoring old spring sites. She was also a founding member of the Casper Artist’s Guild and Theosophical Society of Casper, Hunt said.

She married, came to Casper, and then divorced from an abusive relationship.  It was a fellow artist who suggested she look into homesteading the land of East End Road.

When Neal took over the one-room cabin with daughters Mary and Jean, there wasn’t room for a lot a books.  So they made up their own stories, Hunt said.

Hunt said Neal and her daughters were able to “really, seriously start over” and thrive in a life reimagined on Casper Mountain.

Hunt expects a good turnout this year, based on the number on inquiries. Come early, don’t bring pets, and don’t smoke in the forest, she advised.

The cabin won’t be open due lingering COVID considerations, Hunt said.  Bob and Helen Shepard will provide coffee and cocoa.