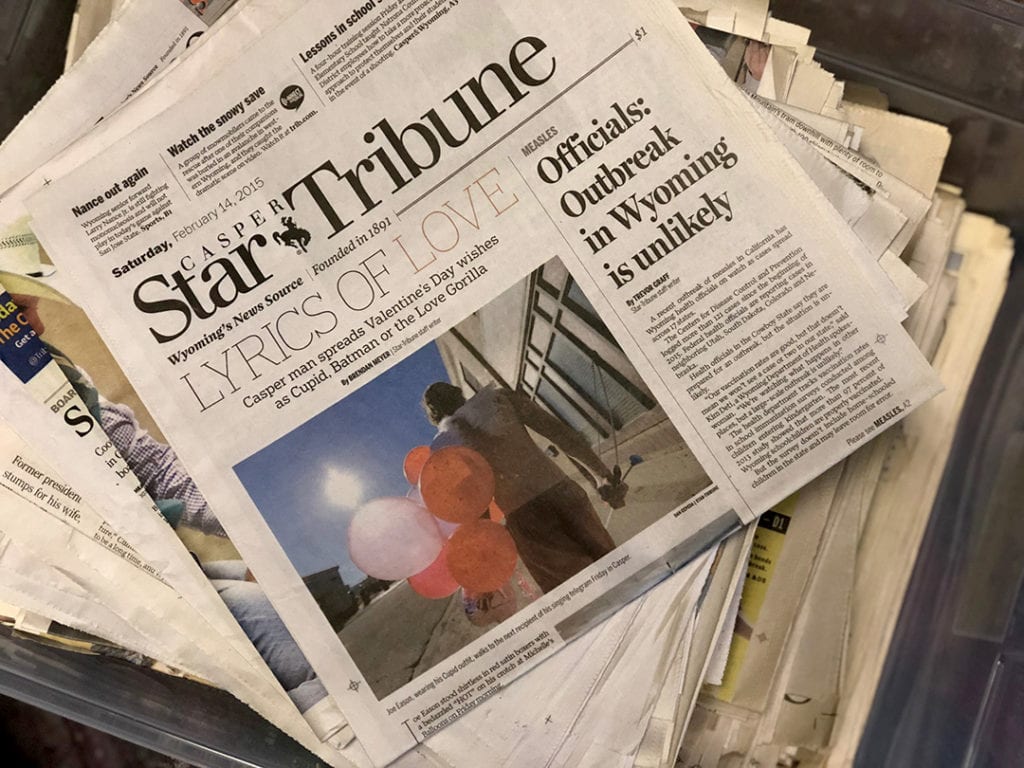 CASPER, Wyo. — Attorney Bruce Moats, who represents the Casper Star-Tribune and the Wyoming Press Association, is preparing to file a petition in district court if the City of Mills and the Town of Bar Nunn’s councils don’t rescind ordinances exempting themselves from a requirement to publish legal notices in physical newspapers.

Moats on Thursday shared the petition he plans to file on behalf of the Casper Star-Tribune and the WPA that would ask the court to declare the Mills and Bar Nunn ordinances null and void since Wyoming law requires that municipalities publish legal notices in “a newspaper having general circulation in the community.”

Moats said in a July 12 letter to Attorney Pat Holscher, who serves as the attorney for both Mills and Bar Nunn, that “we plan to file if we do not hear back from you by [Monday] July 19 that the respective councils will begin the process to repeal the ordinances.”

“Litigation is a last resort, but a necessary one if the towns continue to stand behind the ordinances,” Moats wrote.

Moats’ July 12 letter was in response to a letter Holscher had sent him on behalf of Mills and Bar Nunn on July 6, which was in turn in response to a June 30 letter in which Moats argued that the municipalities cannot lean on the so-called “home rule” amendment to exempt themselves from the legal notice publishing requirements.

That home rule amendment states that “cities and towns are hereby empowered to determine their local affairs and government as established by ordinance passed by the governing body,” subject to a “legislative referendum.”

However, Moats wrote that the home rule provision does not allow a municipality to “exempt itself from ‘statutes uniformly applicable to all cities and towns.'”

While Holscher had argued in his July 6 letter that physical newspapers have ceased to be the most cost-efficient way for municipalities to provide notice to the public of governmental actions, Moats said in his July 12 response letter that such arguments are policy arguments and that Holscher did not address the legal argument he and his clients are making.

In the petition that Moats is planning to introduce in district court if Mills and Bar Nunn don’t rescind their respective ordinances, he argues that the ordinances exceed the authority municipalities are granted under Wyoming law and should therefore be declared null and void.

In addition to requesting this relief for his clients, the petition would ask the court to provide “[o]ther such relief as the Court deems proper.”

While Moats’ legal argument on behalf of the Casper Star-Tribune and Wyoming Press Association may be settled in court, Holscher is not the first person in the state to raise policy arguments surrounding the requirement that notices be published in physical newspapers.

The Wyoming Senate debated a bill during their 2021 General Session that would have allowed municipalities to post minutes of meetings and salary information on their own websites rather than paying to have these published in a newspaper.

“As you can imagine, needing to pay for publishing of minutes of meetings when [those can be made] available on the public entity’s website or other locations can be quite costly,” Sen. Tara Nethercott (Laramie County) said. “We heard testimony from some of these entities that it comprises anywhere from 1% to 10% of their total budgets and can have a particular impact on the smaller communities where those margins are significantly smaller.”

While the Senate ultimately defeated the bill on a third reading vote of 9-20, the debate about cost-savings is also at the heart of what Mills and Bar Nunn are attempting to do, at least according to Holscher, Mill Mayor Seth Coleman and Bar Nunn Mayor Patrick Ford, who have all told Oil City News this is their reasoning.

After Mills and Bar Nunn adopted their ordinances exempting themselves from legal-notice-publishing requirements, Casper City Council member Kyle Gamroth said during a July 6 council meeting that he thought the City of Casper should also think about doing something similar, as the city pays about $70,000 per year publishing legal notices in physical newspapers.

While Gamroth said he thought Casper should think about eliminating the legal notices requirement, he also said that he thought there were good points made in a Casper Star-Tribune editorial in response to Mills’ and Bar Nunn’s actions which argued that eliminating this requirement could diminish the transparency of local government.

Wyoming is not unique in seeing efforts to eliminate requirements to publish legal notices in print newspapers, according to a 2019 opinion piece by Maryanne Reed in NiemanReports.

“In 2018 alone, the [Public Notice Resource Center] tracked about 160 separate bills,” that article states. “About a dozen of them, if passed, would have either eliminated public notice from newspapers altogether; many others would have eliminated it in limited circumstances. Fortunately, most of the bills failed, due to the intense lobbying efforts of state newspaper associations.”

While states have so far kept requirements in place that legal notices appear in print newspapers, the Public Notice Resource Center wrote on July 6 that they think public notices should appear both in print and online.

“That’s why 15 states have passed laws requiring newspapers that publish notices in their print edition to also run them on their website and/or on their state press association’s statewide public notice site,” the Public Notice Resource Center said. “After all, notices are designed to be read and lots of people read stuff on the internet.”

The Wyoming Press Association does make legal notices which appear in print newspapers across the state available online.

The Public Notice Resource Center examines the role public notices have playing in the history of the United States in a 2018 document in which the center also identifies “essential elements of a public notice”:

Federal and state public notice statutes generally establish four fundamental criteria for a public notice. Each of these elements are critical aspects of the checks and balances that public notice was designed to foster.

Every citizen in the jurisdiction affected by the notice must have a realistic opportunity to read it.

Notices must be capable of being archived in a secure and publicly available format for the use of the judicial system, researchers and historians

Reed says in her 2018 Nieman Reports article that “with the decline of commercial advertising, public notice advertising has become an increasingly important source of revenue for local newspapers, especially in smaller markets.” The funding revenue newspapers see from publishing legal notices can help pay for staff salaries.

In some cases, publishing legal notices can generate robust revenues for noewspapers.

“Last year, Missouri newspapers made nearly six million dollars in public notice advertising when a number of ballot issues were up for a vote in the November midterm elections, including three medical marijuana initiatives,” Reed wrote. “Those bills alone resulted in 11 full pages of legal notices that ran for four consecutive weeks in some newspapers.”

However, Reed says that such large revenues are the exception rather than the rule and that in general, newspapers see much more modest revenue from running legal notices.

Reed cites Public Notice Resource Center Executive Director Richard Karpel in her opinion piece who said that efforts to get around legal notice requirements can sometimes be politically motivated.

“It’s often prompted by politicians who want to stop the journalism they don’t like,” Karpel said.

However, some aren’t making the argument that legal notices shouldn’t be made available through media sources, just not exclusively through print newspapers.

Nethercott said during the Wyoming Senate’s debate this spring that allowing municipalities to meeting notice requirements by publishing them in other media sources could result in healthy competition for newspapers.

“A little competition for them might be helpful, whether that be through an online newspaper source, radio or other methods to get transparency out,” she said. “I support transparency. I support the fourth arm of government.”

Other senators argued that print newspapers remain the only source of information for some. Sen. R.J. Kost (Big Horn, Park) said during the Senate’s debate that while “we are in a technology world” there are “quite a few elderly people [who] still read the paper and don’t use a computer.”

Sen. Jim Anderson (Natrona) said he has worked to defend print newspapers since he joined the legislature, but that he saw “the hand-writing on the wall…My local newspaper is going digital. They are putting everything on the internet also.”

Sen. Bo Biteman (Sheridan) said that while cost-savings could be realized by changing the notice requirements, the savings wouldn’t be enough to justify the proposed changes.

“Transparency is more important than saving 0.12% of someone’s budget,” he said.

House Minority Floor Leader Chris Rothfuss (Albany County) said during the Senate’s debate this spring that he thinks it is “not time yet to get rid of the newspapers” though the day may be approaching when the public notice requirements should be changed.

NOTE: Upslope Media lobbied for legislation to allow government notices to be published by online news sources during the 2021 General Session. Upslope is owned by Shawn Houck who is also the owner of Oil City News. Houck had no editorial input into this article.