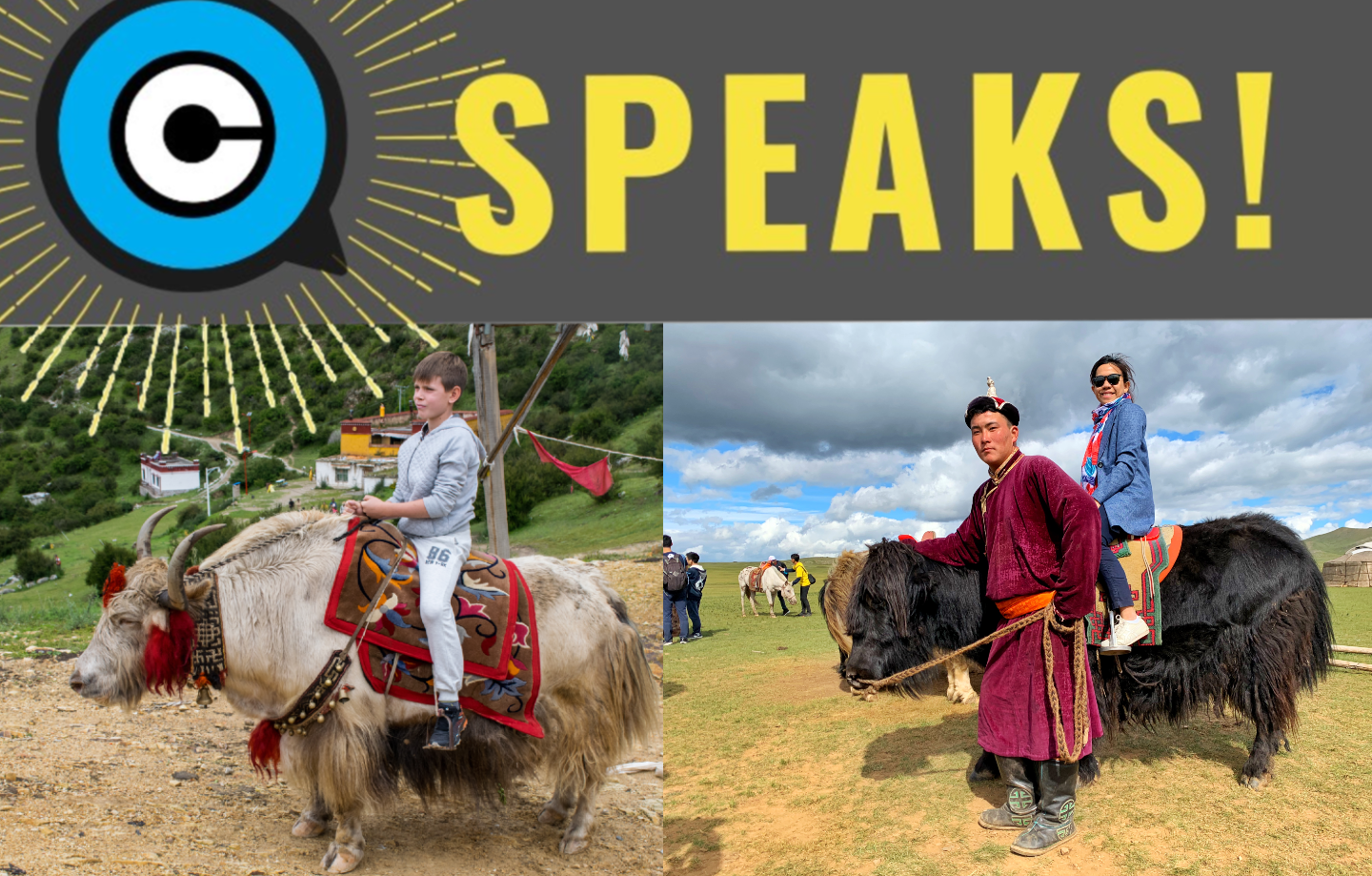 CASPER, Wyo. — Hey out there, everyone! Did you know there is such a thing as yak racing? How do you feel about allowing skateboards in the downtown Casper area? What was your favorite float in the parade last Tuesday?

We’ve gathered some hot takes, thought-provoking views and heart-warming comments to explore all those questions and more in a new edition of Oil City Speaks!

Star is apparently raising yaks at his ranch at the base of Casper Mountain and that has prompted us to learn more about what he calls a “majestic” species. When you saw photos of Star riding on the back of one of his yaks what did you think? Sharon seems to find it silly, suggesting that Star ride on a horse instead.

While riding horses may be more common in the Cowboy State, did you know that yak racing is considered a sport in places like Tibet, Kazakhstan, Kyrgyzstan, Gilgit-Baltistan, Ladakh and Mongolia? Does that sound similar to Wyoming’s celebrated rodeos?

Here’s another way the traditional cultures in central Asia and Wyoming are similar. Yaks, like horses or mules, are also used as pack animals for riding on long treks or for pulling carts in some cultures, according to the International Yak Association.

We’ve learned more about yaks due to our reporting surrounding Jeffree Star such as similarities between Wyoming and geographically similar places like Mongolia. If Star is raising and riding yaks, perhaps he has more in common with cowboys than some might think. After all, wearing a cowboy hat doesn’t necessarily make someone a cowboy. How many Wyomingites have ridden neither a horse nor yak?

Some readers seem annoyed when we report about Star. In response, we just point out that we cover a lot of things. Maybe you’re not seeing some of that others coverage because Facebook or Google’s algorithms aren’t presenting it to you. You can always visit our website if you want to see a wider selection of articles than may be presented to you via your social media accounts.

For transparency’s sake, yes, one reason we cover topics like these is because people engage robustly with that type of content. At the same time, we cover things that tend to get comparatively very little attention but that we think may be important to someone. While it obviously benefits any news organization when you engage with their coverage, it is also up to you what you read or don’t read.

Anyway, since yaks are also apparently a good source of protein, here’s a little food for thought — do you think about your diet? Do you enjoy cheesecake on some nights but avoid it at other times because it would make you too full or be bad for your body? How about a media diet? How much news is too much news for you? When it comes to food, people may have different dietary needs and when it comes to information, what is too much for one person might be the right amount for another. Perhaps in the same way that it is important to eat a variety of different types of food, it is important to get information from a variety of different sources. Perhaps it is important to change up your information consumption habits from time to time. Should people think about temporary media “fasts” every now and then? What do you think of this? What do you think is a healthy diet of information consumption?

Politicians obviously work to raise a lot of money, but what exactly do they do with it? Does raising a lot of money actually help a candidate get into office?

“Money doesn’t always equal victory — but it usually does,” OpenSecrets, a nonprofit organization focused on tracking spending and the effects of that spending in American politics, says. “Sometimes contributions flow to the candidate who is already viewed as being much stronger than his or her opponent. Sometimes the money goes to the less well-known candidate and results in a surge in popularity.”

“Even in wave elections, the candidate who spends the most usually wins. This trend is stronger in the House than the Senate but applies in both chambers.”

While the funding might help a candidate get into office, StarrLee suggests that such fundraising efforts might have more societal impact if the money went directly toward helping people in local communities. Political candidates might argue that getting into office would allow them to help those communities even more by sitting at the levers of political power. What do you think? Are you troubled when you hear about the amount of money in politics? Do you think that is a necessary part of how things function in the country? If you think money in politics is a problem, what type of reforms would you like to see enacted?

While the topic came up because of an electric scooter company wanting to do business in Casper, the Casper City Council is now considering lifting the ban on skateboarding, scooters and other “toy vehicles” in the downtown area. The council isn’t talking about making it legal to do skateboarding tricks on benches and other infrastructure of Casper’s downtown concrete jungle, but they are thinking about making it legal for skateboarders or longboarders to cruise around the downtown area.

Studies have shown that skateboarding can improve mental health and help people foster relationships with others in their community, according to the LA Times. That’s in addition to whatever fitness benefits the activity has. Nevertheless, some people continue to hold stigmatized beliefs about skateboarding.

What do you think about allowing skateboards downtown? Are you worried about the troublesome teenagers that might attract to the downtown area, or — conversely — could encouraging some of the teenagers who have supposedly been gathering to fight in the downtown area to take up skateboarding actually address this behavior problem?

If teenagers or other people are bored, could taking up a challenging activity like skateboarding give them something else to do? Should someone in Casper build a skate park somewhere in the downtown area? Police officers sometimes patrol on bicycles. Do you think knowing how to skateboard could be a positive mark on the résumé of someone applying to become a police officer?

During last week’s city council meeting, Freel tried to emphasize that the recreational softball leagues are supposed to be fun and that they aren’t a place for people to get into fistfights.

Comments in response to that story show that Freel is far from the only person to notice this problem. Danny’s comment is humorous, but also thought-provoking. His wife felt like she was looking after a bunch of toddlers while supervising during softball leagues. That raises a question: are these adults who are fighting at softball leagues (or bars or other places around town) simultaneously parents? Is it possible that some of the same adults who fight at softball league are also the parents of some of the teenagers looking to get into fights on busy nights downtown?

If they want to fight, why are they doing it during softball leagues? Why are teenagers looking to get scrappy when the downtown is bustling? Are they seeking attention? Are they bored? Are they simply losing their temper too easily?

Do you think issues like teenagers fighting downtown or adults fighting at softball leagues are isolated, or do you think these things are connected to other problems in the community? What might some of those other problems be? How do you conceptualize the issue? Does Casper need more boxing, mixed martial arts, karate and judo classes?

Sheryl’s comment, like many that were shared in response to this story, was heart-warming because it highlighted an appreciation for the risk Bryant took to save the two people who had not been wearing life jackets when their flotation device punctured and sank. It’s also heart-warming that everyone was okay in the end.

Moreover, Sheryl’s comment about the importance of wearing life jackets is also thought–provoking because it serves as a reminder that anyone could potentially get into a bad, unexpected situation while recreating on the river.

The winning float in the parade featured members of the Casper Mountain Young Marines re-enacting the iconic Iwo Jima Memorial. The float was made possible by the Young Marines, the American Legion, and the Marine Corps League both for Casper and for Colorado. There were five children on the float re-enacting the memorial, which features marines placing the American flag on top of Mount Suribachi during the Battle of Iwo Jima near the end of World War II.

The parade saw a great turnout and it was heart-warming to see people able to get together again after a hiatus in summer 2020 due to the COVID-19 pandemic. The Iwo Jima float was also quite creative and it is also heart-warming to see that the efforts of the children and everyone who helped make the float a possibility resonated with so many people.

What makes for a valuable online discussion? It is no secret that readers are sometimes wary about the “dreaded” comments section (on stories posted to Oil City’s Facebook page). While comments may seem frustrating at times, they can also allow people to voice their perspectives, add more information for readers to consider, or give people a way to celebrate their community together.

That’s why we’re bringing you Oil City Speaks, a selection of noteworthy reader comments from our local coverage. We appreciate that you care about your community and we want to take the time to recognize comments that stand out to us. We’ll also offer some fact-checking on comments.

We’re not here to police your comments or your views. Comment Guideline: We welcome comments expressing all points of views on our posts—positive and negative—but reserve the right to remove posts that contain inappropriate language, links to items for sale, hate speech, personal attacks, threats, or off-topic matters.