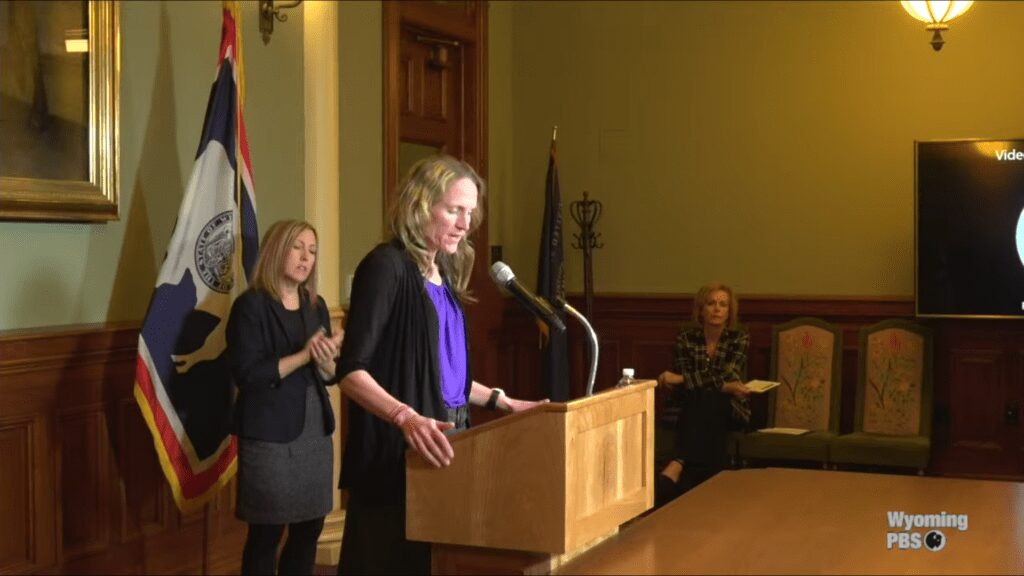 Circumstances have changed with the COVID-19 Delta variant’s incursion into Wyoming, health experts say, prompting officials to issue new recommendations and many to ask whether more needs to be done to increase the state’s vaccination rate and slow the virus’ spread.

Wyoming appears to be in a “new, concerning” phase of the pandemic, the Department of Health announced Wednesday, as the highly-contagious Delta variant is now dominant.

“National estimates right now are that about 92% of the virus infections in Wyoming and in our region are due to the Delta variant,” State Health Officer Alexia Harrist told WyoFile.

“We are deeply concerned,” she said in a Wednesday press release.

Most cases of the Delta variant in Wyoming are among the unvaccinated. The health department reviewed more than 5,000 lab-confirmed and probable cases identified among Wyoming residents age 16 and older between May 1-July 28, finding roughly 95% of individuals infected were not fully vaccinated against COVID-19. During the same period, just under 94% of the nearly 300 persons hospitalized with the disease were unvaccinated.

The variant, Harrist said, spreads much more easily than the COVID-19 residents experienced for most of the pandemic. She expects the number of breakthrough cases — infections in vaccinated people — will increase.

Wyoming’s active cases shot up to more than 1,000 Tuesday, the highest recorded number since Feb. 4. The health department also announced 10 more COVID-19-related deaths Tuesday, bringing the total to 786 since March 2020. Laramie County has the highest number of active cases at 199. Harrist said it would take time to know whether the area will see a spike from the enormous crowds that descended on Cheyenne Frontier Days.

With cases rising, Harrist announced last week that she was recommending even the vaccinated begin masking in indoor public spaces in most counties. It came just days after the Centers for Disease Control and Prevention updated its guidance to include masking, reversing its position from just months before.

“It certainly does feel like a step back and frustrating, and I can certainly understand that frustration that we want to be out of this,” Harrist said. “And believe me I would love to be out of this, but we also have to look at the reality, and we want to target the recommendation that makes the most sense according to the science. … And unfortunately, it might not be the last change and recommendations that we see.”

Even with those cases being rare, Harrist said it’s important for the vaccinated and unvaccinated alike to adhere to the masking recommendation. She points to a CDC study that looked at a Barnstable County, Massachusetts, town where 74% of COVID-19 infections were among the vaccinated following large public gatherings in July.

“[Wearing masks] is an act to protect the community,” Harrist said. “With the Delta variant, we need to step up those protections.”

There’s also a need to strike a balance with what is practical, Harrist said. It would be logistically impossible to implement a policy where only unvaccinated people are required to wear masks.

Ultimately, Harrist said, the state’s vaccination level is below where she would like it to be, so chances are when there are crowds indoors, unvaccinated people are present.

“We continue to follow the science,” Michael Pearlman, Gordon’s communications director, wrote in an email. “At this time we have had no conversations about reimplementing any health orders or mask requirements. The Governor along with the Wyoming Department of Health will continue to monitor Wyoming’s hospital capacity, as he has throughout the pandemic.”

The most effective path toward a return to something like normalcy in Wyoming is to increase the rate of vaccination, Harrist said.

“We’re still in a position where if enough people get vaccinated we can move closer and closer to where we all want to be, which is normal, which is no more masking, no more distancing, etcetera,” she said. “So we still have a shot here, but we really need to encourage people to get vaccinated, continue testing, continue contact tracing, so we can beat back this variant the way we did some of the early strains.”

Some 33.5% of Wyoming residents are fully vaccinated, the fourth-lowest rate nationally. U.S. Census data show Wyoming as the most vaccine-hesitant state, with 25% hesitant about receiving a COVID-19 vaccine. Of those vaccine hesitant respondents, 51% reported concerns about side effects, while 49% said they did not trust the COVID-19 vaccine and 45% reported not believing they needed it.

The number of vaccines being administered daily in Wyoming peaked at just less than 8,000 doses in March and has since declined. A slight uptick occurred in July following a low point earlier in the month.

Pressure is mounting on the U.S. Food and Drug Administration to give full approval to the vaccines. Harrist expects to see an increase in daily vaccine doses being administered after the approval goes through, she said.

The authorization should help with encouraging people to get the vaccine, Jen Kates, senior vice president and director of Global Health & HIV Policy at the Kaiser Family Foundation, told WyoFile.

But without government policies aimed at driving the vaccination rate up, Kates said it’s unclear whether Wyoming will see improvement in the coming months.

“Without additional interventions, it’s not clear yet that’s going to be enough, ramped up at a level that’s really going to go from the 30-something-percent to 50-something-percent or 60,” she said. “I think the challenge that we faced with COVID since day one is when you’re in a pandemic, there’s a really delicate balance between personal choice and public safety.”

Gordon has stood firm on his position on the matter. While the governor, who is vaccinated himself, has encouraged Wyoming residents to become innoculated, he continues to frame it as a matter of personal choice.

On May 7, Gordon issued a directive prohibiting state agencies, boards and commissions from discriminating based on vaccination status. The order also urges local governments and private businesses to “provide full access to public spaces and services, regardless of an individual’s vaccination status.”

Policies that prohibit public health measures from being implemented,  including Gordon’s May 7 order, interfere with the ability to control the virus’ spread, Kates said.

“It could interfere, certainly, with the ability to curb the pandemic,” she said.

State officials had discussed a potential lottery system to encourage vaccination, but Pearlman said there are no plans to implement one, pointing to a University of Minnesota study that found the Ohio COVID-19 lottery did not drive vaccine uptake.

Gordon again encouraged residents to get vaccinated in a Wednesday afternoon news release.

“As our hospitals continue to see more COVID-19 hospitalizations, and as long-term and child care facilities are forced to close due to COVID-19 infections, it is time to remember all the things we learned last year and consider getting vaccinated as the most effective way to protect yourself against severe illness,” Gordon said.

With classes for K-12 schools, community colleges and the University of Wyoming just around the corner, the pandemic’s evolving circumstances have policymakers on edge.

The health department will work closely with the state’s K-12 schools on health guidance and recommendations, Harrist said.

“Decisions about that will be made at the school district level, but we will continue to provide recommendations and guidance,” Harrist said.

Gordon on Wednesday said he would not issue a statewide mandate for masking in K-12 schools, leaving the decision to local school boards.

“Wyoming was first in the nation in having a safe and successful in-person school year last year,” Gordon said in the Wednesday news release. “My focus is on supporting local school boards as they take into account conditions in their community and work to assure students learn safely this year too.”

“I can say with some certainty that moving classes all online is not being contemplated, but other measures are possible, based on guidance from the state and CDC, as directed by the Board of Trustees,” he wrote in an email.

Baldwin said masks are recommended for everyone regardless of vaccination status in all indoor areas on campus. A mask mandate in certain indoor areas such as classrooms and labs is possible depending on conditions, he said.

“We want to be sure that colleges and universities have the tools to keep people safe,” Michael Huey, American College Health Association interim CEO, told WyoFile.

Gordon’s May 7 directive against vaccination mandates, however,does not apply to UW, Perlman said, as it is a governmental entity, not a state agency.

“The Governor’s directive does encourage other public entities to provide full access to public spaces and services, regardless of vaccination status,” Pearlman wrote in an email. “This is in line with his belief that public entities closer to the people should have authority. The Governor’s directive provides UW and the trustees with a recommendation but not a mandate.”

A Chronicle of Higher Education review of U.S. colleges found recently that 645 are requiring vaccines for at least some employees or students.

UW’s trustees had extensive conversations about the possibility of a vaccine mandate for the university, Baldwin said. But Trustee David Fall made a motion during the trustees’ May meeting to not mandate vaccines for the upcoming academic year, which was carried unanimously.

With so much uncertainty, Seidel said UW needs to be prepared “for things that might happen.”

This story is supported by a grant through Wyoming’s Established Program to Stimulate Competitive Research (EPSCoR) and the National Science Foundation.