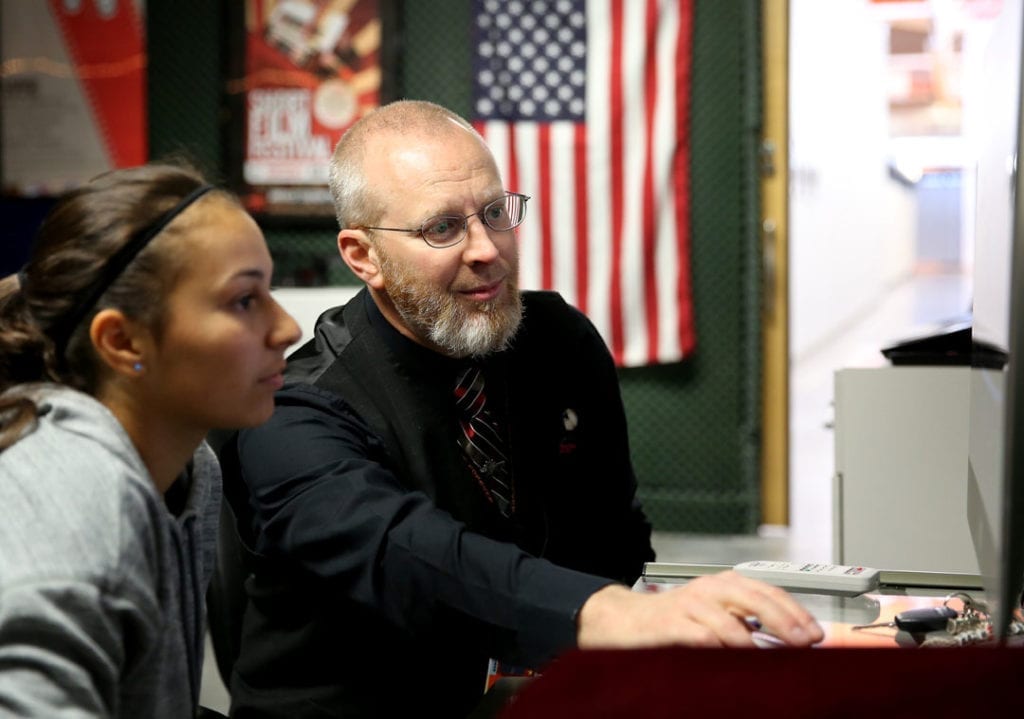 CASPER, Wyo. — Like many school teachers, Lance Madzey has a summer side hustle.

In his case, it’s house painting.

“I’m really slow and meticulous,” he said while giving the trim of a Casper neighborhood house a fresh coat of dark blue paint late last week.

“I really enjoy this; it’s really mellow,” he said.

Madzey was particularly mellow even as he faced a life-changing move that will take him to a teaching position in Vermont after 26 years as the film and television instructor for the Natrona County School District.

He’s sold his house and most of its contents, and even sold his beloved Toyota truck — the same model and year as the one Marty McFly swooned over in “Back to the Future,” he points out. After finishing this painting gig, he’ll be off to Vermont, leaving behind a career that started with a local TV award and inspired hundreds of students.

Madzey moved to Casper after graduating with a film degree from Columbia College in Chicago. While there, he worked numerous jobs on local TV and low-budget films before taking a production job at KTWO-TV back when local TV stations had robust staffs who produced content and advertising spots.

This being the mid-90s, Lance won a Wyoming Association of Broadcasters (WAB) award for a spot that lovingly spoofed director Quentin Tarantino’s style in “Pulp Fiction,” which caught the eye of NCHS administration looking for an instructor to assist Jack Nokes in teaching the broadcasting and television production classes.

“Back then there were only a few students,” said Madzey. Soon, the classes evolved into filmmaking and television, and he was assigned to expand the curriculum.

“That was awesome,” he said. “They gave me their trust.” He added that some 150 students now take the classes each year.

Madzey says there are two basic kinds of students who sign up for the classes: those who love film and television and might want to pursue a career, and those who “just want to have fun.”

In all cases, Madzey says he aimed to teach students how to cooperate and tap their inner creativity.

“They get to make something together, and then share it with people, and that takes guts,” he said. “They show it to people and learn to take criticism, but the most important thing is how you learn to treat each other as humans and be nice and kind to each other.” Student films were often shown in public at Casper’s downtown theaters during annual film festivals organized by Madzey.

Another key life skill Madzey tries to instill is giving students the ability to watch media —be it cable news or documentaries with distinct points of view — with critical eyes by teaching them the emotionally manipulative cues and techniques commonly used by filmmakers.

“I ask the kids, ‘what are they trying to tell you here, what do they want you to feel,'” he said. “That’s what television is, it’s all manipulation.”

Before Madzey attended college in Chicago, he had a short but disastrous stint at Montana State University, where he changed his major to biology after an experience with a particularly “uninspiring” and bitter film instructor.

“But I really loved film, so I asked my parents to help me try Columbia,” he said, “and that ended up changing my life.”

There, he found the inspiration, excitement and support from the instructors that he needed. It’s these contrasting experiences that have helped to inform his career in teaching.

His students tend to agree, judging by messages of support they’ve been posting on Madzey’s Facebook wall since he announced the Vermont job.

“I will always look back fondly on my time in your classroom,” wrote former student and professional Casper photographer Jessica Sorensen. “The culture and community you created was unlike anything I’d ever experienced in school and I was always excited and proud to be a part of it.”

“You helped me get my first job in TV production at KCWY when I was just 17,” wrote another student, Alicia Schuller Zeringue. “That job, along with the skills and knowledge I learned as your student, have contributed to my success in every career opportunity I’ve had since.”

Film and television technology has changed dramatically over 25 years, as has the media landscape. Gone are analog camcorders tethered to low-resolution tape decks. In are DSLR cameras that shoot 4K high definition, and even pocket-sized smartphones that shoot video in previously unimaginable quality with powerful editing tools built in.

Madzey welcomes the new tools, with the strong exception to vertical videos shot on smartphones. “I f—— hate [it]; it drives me crazy,” he emphatically says.