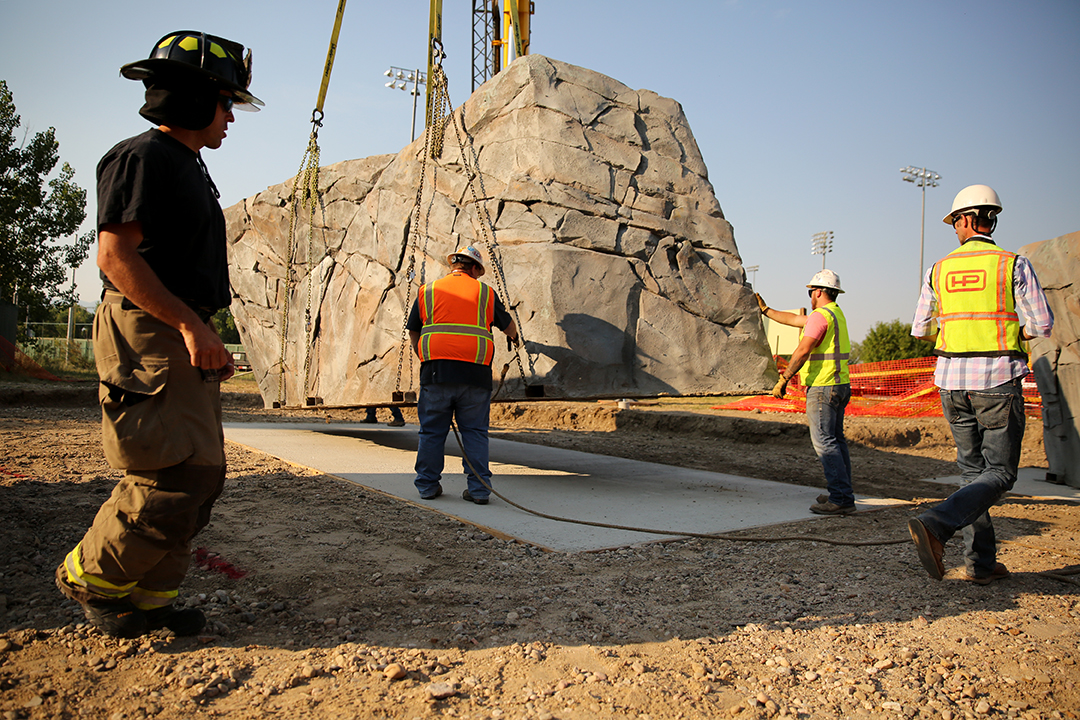 CASPER, Wyo. — The Rotary Club of Casper had a rock-solid idea for a new park that took more than two years of work and planning to make happen.

“We have three boulders that were custom-made that will allow kids and others to do some rock climbing,” said Rotary Club of Casper President Mike Howe. Funding for the park was paid for entirely by Rotary Club using money from its annual Duck Derby funds, said Howe.

The boulders were fabricated out of shotcrete by a company in Colorado that specializes in climbing walls and boulders, said John Griffith, who was overseeing the installation.

The boulders weigh about 10,000 pounds, 20,000 pounds and 42,000 pounds, respectively, are about 10 feet tall, and will be surrounded by a soft wood chips made from beetle-killed trees harvested in Wyoming, said Griffith.

The climbing holds will be set by a certified route setter, Griffith noted, adding that they hope to eventually organize climbing competitions.

“They’ll be friendly competitions, but it’ll also be a good learning environment for people getting into the sport, trying to get accustomed to it and learn the right techniques and how to be smart and safe when you’re climbing here or somewhere else.”

The park will be open to anyone and will be lit at night.

Micah Rush, a Casper firefighter, climber and member of the 307bouldering Club, was one of the consultants on the project.

“For Casper to have one of these, it’s amazing,” said Rush. “It’s going to be nothing but good for this community.”

He says it gives kids a chance to safely learn climbing in a state with a lot of available outdoor recreation, and hopes it will help make Casper an attractive place to retain younger people.

The only other similar park in the state is in Jackson, said Rush.

Griffith says they plan to have the park ready to use by next weekend, in time for the annual Riverfest beer festival at Crossroads Park.