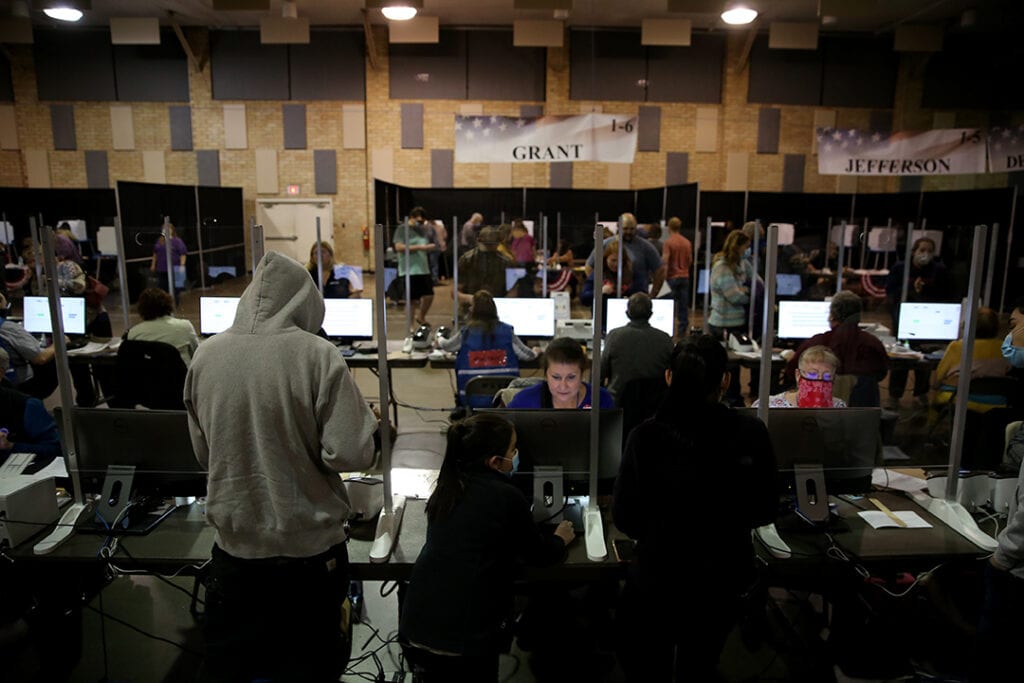 Later in the meeting, Rep. Jim Roscoe (Lincoln, Sublette, Teton) fact-checked this claim, noting that Maine had 78% of the electorate turnout to vote in the 2020 general election (when ranked choice voting was in use) compared with 73% turnout in 2016, prior to implementation of ranked choice voting in the state. Maine’s voter turnout in 2020 was among the highest in the United States, according to the Bangor Daily News.

Steinmetz said that a clerk in Maine had claimed that elderly people in particular struggle with understanding ranked choice voting.

However, citizens who described themselves as elderly told the Joint Interim Corporations, Elections & Political Subdivisions Committee that they have no trouble understanding how ranked choice voting works.

“I’m not confused about ranked choice voting,” Johnson County resident Frank Pratt said, saying that he could be considered a member of the “elderly class.”

He also pushed back against the notion that voters are incapable of researching multiple candidates in order to meaningfully rank them in order starting with their favorite candidate.

Sheriden resident Jackie McMann said she could also be considered elderly and that she has no trouble understanding ranked choice voting.

She said ranked choice voting would be an improvement over the current “binary” system in which people’s votes are all or nothing, being for one particular candidate and effectively against all other candidates.

McMann acknowledged that the ranked choice system may be more complex than the current system but said that people are living in a “complex society with complex issues” that needs something better than a binary, either/or system in order to function in a robust manner.

Wyoming GOP Chair Frank Eathorne, without citing any numbers, said that the “grassroots” among Wyoming Republicans are opposed to ranked choice voting.

He said that “grassroots” Republicans instead prefer a concept like runoff primary elections as they want to see a candidate win a majority of the vote in order to win a seat at the levers of power.

Carbon County Republican Party Chair Joey Correnti told the committee that he thought members should be cautious about people making claims about the opinions of the over 130,000 Republicans in Wyoming, especially when they don’t cite specific numbers.

Correnti said that he is opposed to ranked choice voting as he thinks it “raises more questions than it provides solutions.” He said that instead of working to reform primary elections in Wyoming, the legislature should consider whether the state should have any role in primary elections to begin with.

He noted that the Republican Party and the Democrat Party are not branches of government and that both should perhaps be responsible for determining their own primary election processes to determine candidates for the general election.

Wyoming GOP Vice Chair Dave Holland said that ranked choice voting might be too complicated and that the legislature shouldn’t rush to implement it ahead of the 2022 election.

Committee Vice Chair Rep. Dan Zwonitzer (Laramie County) said that he thought that the reason the committee was considering the bill at all was because the Wyoming GOP was pushing for changes to how primary elections are conducted in Wyoming by 2022.

Holland said that while the party wants change, the push is for runoff primary elections. He said that in his conversations with county clerks, it has become apparent to him that this will not be doable in time for the 2022 General Election. Speaking for himself rather than on behalf of the party, Holland said he’d prefer the legislature take its time and get something like a runoff election system right rather than rushing to get something new implemented in time for the 2022 election cycle.

“Don’t pass something that doesn’t work just to meet a deadline,” Holland said.

Sen. Cale Case (Fremont County) said he thought it might be best for the legislature to leave the election structure alone until the 2022 election cycle is over.

However, Case made a motion that the committee pass the draft ranked choice voting bill and approve it for introduction during the full legislature’s 2022 session.

He noted that he had concerns the concept could be implemented in time for 2022. A representative from the Secretary of State’s office told the committee that implementing the concept would come with costs and would also require time to change voting systems and ensure they are properly able to handle ranked choice voting, a task which she said is not likely to be feasible in time for the 2022 election cycle.

Case said that while there are obvious challenges to implementing ranked choice voting, he thinks it is the “most implementable” option for reforming Wyoming’s election structure on the table.

He added that he thinks ranked choice voting has advantages over both runoff elections and so-called “jungle” primaries.

“This is the wave of the future and it is a good one,” Case said, suggesting the committee at the very least keep the draft legislation alive for further debate.

Sen. Charles Scott (Natrona) expressed opposition to the bill, though he said ranked choice voting is “an intriguing idea.” Scott said that while he thinks it may have applications among small groups, using it for broader elections could be too confusing to people.

The committee voted 6-8 against advancing the draft legislation for introduction during the full legislature’s 2022 Budget Session.