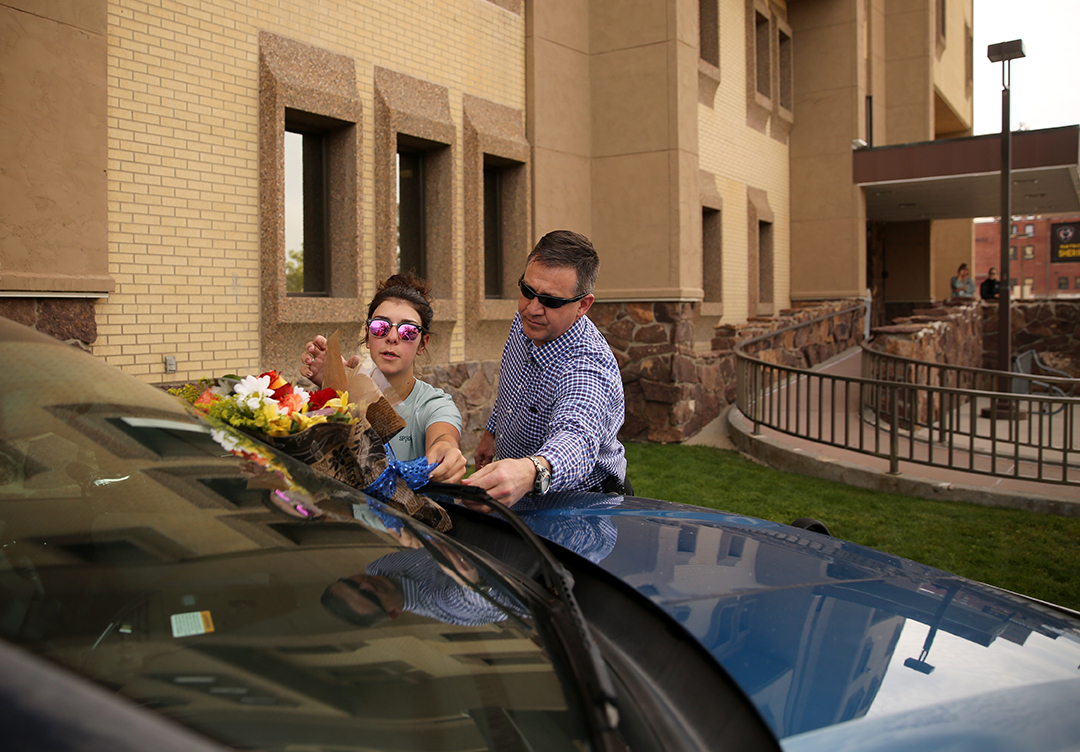 Casper Police officer Amanda Cook and Detective Shannon Cole place flowers on the patrol car of Lieutenant Daniel Dundas in front off the Hall of Justice on Tuesday morning in Casper. The Casper Police Department announced the sudden death of Lt. Dundas on Monday evening, bringing an outpouring of support from the community and other police and emergency agencies around the region. (Dan Cepeda, Oil City)

CASPER, Wyo. — Casper resident Ashlee Wirtala carries the memory of Lieutenant Daniel Dundas with her after randomly meeting him one night months ago.

“The interaction I had with him was wonderful,” she said in a message to Oil City News.

Wirtala says she was quite upset, but Dundas quickly calmed her down by making her laugh and telling jokes.

“When I apologized for the wasted time, he told me he’d rather be sitting with me than doing other things,” she recalled. “His kind words and the advice he gave have stuck with me, and I think about them often, especially when I’m having a bad day.”

Wirtala’s memories mirror many others who took to social media after the Casper Police Department announced Dundas’s unexpected death on Monday evening.

“He was so intuitive, compassionate, and enthusiastic during this conversation,” she said. “I expected to have to convince him of the need to better support this population, but he understood the issues clearly from the beginning at a very human level in a way that completely surprised me and gave me so much hope for progress.”

Brendan Lamb was Dundas’ neighbor, and said he had a “big presence here in the neighborhood before he moved a couple of years back.” Dundas’s son went to a neighborhood elementary school there, he said.

“He always made a point to stop by the 4th of July block party, even though he was usually on duty,” Lamb recalls. “He was the kind of police officer that kids always wanted to go up and talk to, and he always made time for kids.”

Other than announcing Dundas’s passing, no other information was given out of respect for his family, said the CPD in their short statement.

“Our thoughts and prayers are with his family and all those who were blessed to know him,” they said.

Almost immediately, other police and emergency offices began to send support to their Casper colleagues and the community.

“Our thoughts and prayers are with you as you navigate through and process this tragic loss,” said the Mills Police Department.

But it was the outpouring of grief from community members on social media posts by the hundreds that perhaps say more than anything, praising the community-minded and amiable lieutenant who lived in Casper most of his life.

Dundas, a Natrona County High School grad, joined the Casper Police Department in 2008 soon after graduating from the University of Wyoming with a Bachelor’s Degree in Criminal Justice and Psychology, according to the CPD. He was very active in community outreach with the department, joining police community activities and posting videos on social media.

“He put himself out there for all of us in Casper- physically, socially, spiritually,” said Becci on the CPD’s Facebook post.

“Danny Dundas was a stellar human being,” said Jennifer. “I am so happy to have known him in a small way.”

A Casper Police Department spokesperson said they are communicating with the family and will say more at a later time.

Meanwhile, Lt. Dundas’s patrol vehicle was parked in the lawn in front of the Hall of Justice on Tuesday morning, with flowers placed carefully on the windshield.

A small American flag sits in the passenger side vent, just as Lt. Dundas left it.

“He was a bright shining light and his impact was felt widely throughout our community,” said his former neighbor Lamb.

“He will be missed by many people.”