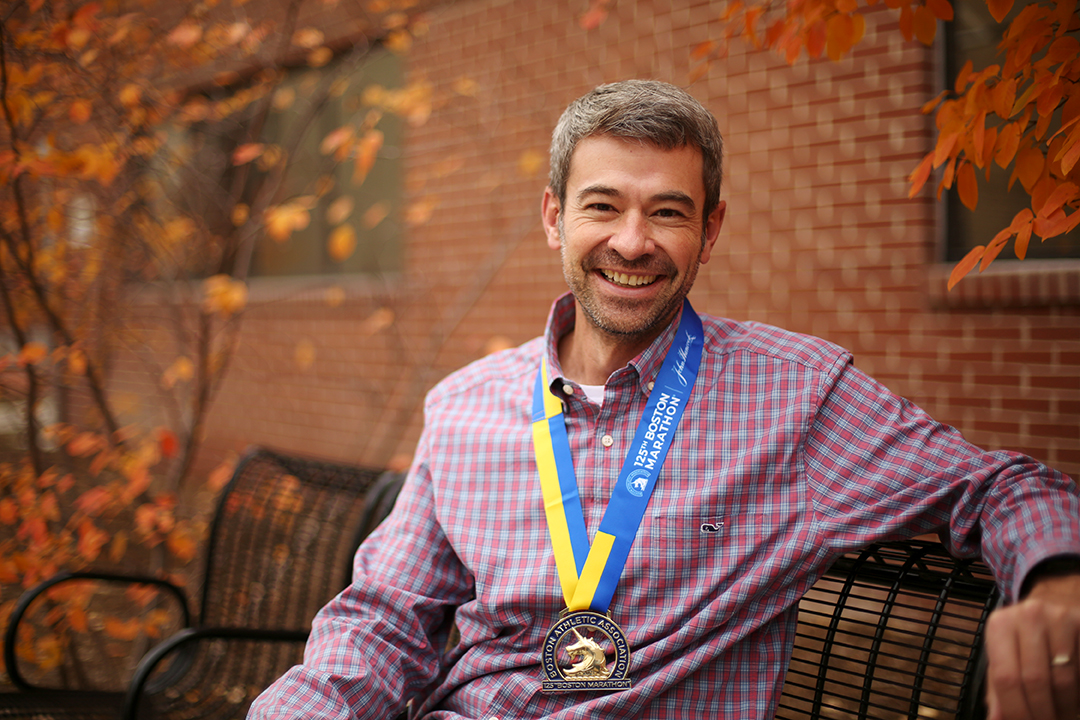 Kevin Helling, medical director of bariatric surgery at Wyoming Medical Center, poses with his Boston Marathon medal at the WMC on Monday, Oct. 25. Helling started running seriously during the COVID-19 pandemic and was able to qualify for the Boston Marathon after hiring a personal trainer. (Dan Cepeda, Oil City)

CASPER, Wyo. — Kevin Helling is the medical director of bariatric surgery at Wyoming Medical Center in Casper, Wyoming. He is a doctor and a surgeon with a very interesting hobby, a hobby that is just as time-consuming as being a surgeon: running.

The Boston Marathon is one of the most famous marathons in the states. This 26-mile track was first run in 1897. The event normally brings crowds of 500,000 spectators and 30,000 participants. It normally occurs on Patriot’s Day in April, but with the COVID-19 pandemic they moved it to October this year.

This year’s event was special because it was its 125-year anniversary. For Helling, it has always been a dream for him to run in the marathon. It has some specific qualifications in order to make it into this event and this year was even more difficult because of the special occasion, but also because they were limiting numbers of who could participate because of COVID-19. This year, only 16,000 to 17,000 people were able to run, and Helling was one of the lucky few to qualify.

In order to run in the Boston Marathon, you have to qualify by having a fast running time in other marathons. For Helling’s age group, he had to qualify with a time less than three hours and ten minutes normally, but this year with the added restrictions, it was three hours and two minutes. However, he qualified with a runtime of two hours and fifty minutes in a marathon that he ran in Montana in 2020.

You might think that to get to this phenomenal and almost unthinkable run speed (at least for us nonrunners out here) you would have to have been training all your life. However, that is not true. Helling may have always enjoyed running, but he was never avid about it until the pandemic happened.

When COVID-19 struck the nation and shut down medical procedures, Helling was quarantined for eight weeks. With all of this extra time on his hands, he decided to start running. He says that once he set his goal, he hired a running coach and started in on the hard work.

He trained by running eight to ten hours — equaling up to fifty to seventy miles — week. He says that the training cycles last twelve weeks and that the schedule might change when coming up to a race or after the race is over.

The first marathon he ran was in Jackson Hole and it took him four hours. He cut the time down significantly after starting to train the right way. He says that he had to learn the smarter way to train, which consists of running at a slower speed for more prolonged periods of time. According to Helling, this lets your body settle in and changes your metabolism.

Helling explains that the goal was similar to becoming a surgeon. There was a lot of hard work and dedication poured into making it. He says, “Like with anything, if you want it bad enough, you will get there.” By setting that goal Helling made it into the top 20% of finishers in the Boston Marathon.

Helling says, “When I was there [at the Boston Marathon], I was excited as I have ever been. … It felt surreal.” He says that he started out too fast because of the excitement but that he was able to settle his heart rate after that.

There are three particularly famous segments of the track that make it extra special for runners like Helling: the scream tunnel at Wellesley College, a segment by the Boston College, and Boylston Street in Boston. Helling says that the crowds help you keep going when your body is starting to give out.

Helling has been training in Casper, Wyoming and says that it helped him a lot when he was in Boston. “You’re running just as hard, but there is so much more air at sea level.”

One of Helling’s biggest “thank yous” actually goes to the running community in Casper. They were cheering him on before the race and during it. He says that it means a lot to have a support system. He is also thankful to his family for letting him take on such a time-consuming hobby on top of performing surgeries at the Wyoming Medical Center.

“The running community in Casper is awesome. … I love that I received so much local support.”