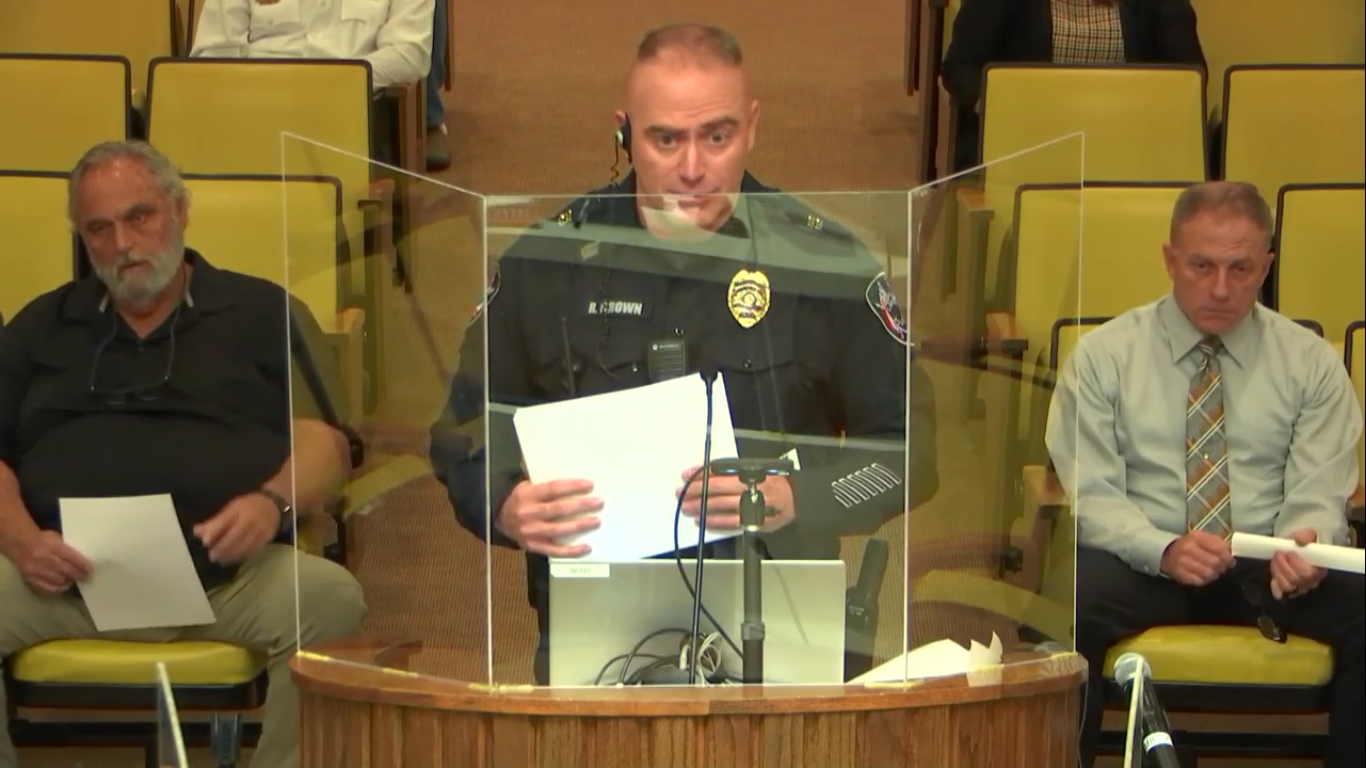 CASPER, Wyo. — “Where are you going, what do you need and how do we help?” Casper Mayor Steve Freel asked Police Captain Richard Brown on Tuesday.

Brown has been spearheading efforts to improve support within the Casper Police Department for officers’ wellness and told the city council on Tuesday that the approach needs to be holistic and address both physical and mental health.

As part of his efforts, Brown said that he had put out a survey to officers and found that they are getting only 4-6 hours of sleep per night on average. Brown also said that research has shown that law enforcement officers in general have shorter life expectancies than the general population.

“A 2013 study published by the National Institutes of Health found the average life expectancy of a police officer to be 57, almost 22 years younger than the general population,” the Labor Relations Information System stated in a 2019 article exploring a new wellness program being implemented for the Steamboat Springs, Colorado Police Department.

Brown has been exploring research into how to help address some of the health issues facing officers. As an example, he said that some research suggests that having first responders practice yoga could lead to an 80% reduction in injuries.

In terms of what the department is already doing to support officer wellness, the Casper Police Department offers peer support groups and has brought in professionals to offer individual and group counseling.

In conjunction with weekly peer support groups, the department is planning to bring in medical specialists in coming weeks who will touch on various aspects of health. Doctors will provide support for cardiovascular wellness, nutritional health and mental health.

New officers are also provided training when they go through the academy, including classes on traumatic events and post-traumatic stress disorder. Brown added that officers who have been involved in officer-involved shootings are also brought in during the academy to teach cadets.

Brown said he would like to see the creation of a program for the families of cadets in the academy to give them the opportunity to learn about and ask questions about what they can expect as an officer gains experience and the challenges that can entail. The class would also help teach families how they can help support officers’ wellness.

In terms of improving support for officers, Brown said that he would like to see the city explore the possibility of bringing in an in-house counselor. Having such a counselor could make counseling available not only to Casper police officers but also to other first responders.

He also noted that other across-the-country departments may require officers take psychological evaluations on a much more frequent basis than in Casper. Brown noted that he hasn’t had to take an evaluation since joining the department in 1999. In some departments, evaluations are required on an annual basis or once every five years.

Council member Lisa Engebretsen asked Brown whether he thinks officers would actually take advantage of access to an in-house counselor.

“That’s another exceptional question,” Brown said. “We’re bull-headed people; we think we can fix ourselves. That’s why we are in the job we are in, because we are here to solve people’s problems and we never perceive ourselves as victims.”

Brown said that he thinks officers might be more likely to take advantage of counseling services if they could be afforded the opportunity to receive such support during work-time.

Casper Fire-EMS Chief Thomas Solberg also spoke with the council on Tuesday, saying that the department has been participating in an International Association of Firefighters peer support program for the past two years, with some Casper firefighters receiving training to help facilitate support to their peers.

Solberg noted that there may be difference in the support provided to police officers and firefighters. He said that after significant calls, firefighters engage in informal debriefings back at the fire house. After a police officer responds to an incident, they likely continue their patrol without a chance to debrief after each incident.

While he said there may still be some stigma among firefighters about talking about emotional issues, Solberg said he thinks firefighters are having having informal conversations with one another. He said he didn’t have any data on whether firefighters are seeking help beyond that.

The program offers certified psychotherapy that helps with healing from trauma and emotional distress symptoms. Since January, city employees have received 21 hours of such services.

Council member Kyle Gamroth said during the discussion that city employees receiving 21 hours of such services since January seemed low to him given the large number of city employees that could potentially access those.

Belser said that the safety specialist and human resources specialist within the city have also been working with supervisors to try to ensure they are equipped to have conversations surround mental health issues with employees.

Belser said that it seems some employees prefer not to talk at all about mental health issues, noting that that seems to be an issue in male-dominated departments.

Council member Bruce Knell said that he has been researching how to improve mental health services for police officers and that he thinks telehealth is promising. He said that he and City Manager Carter Napier held a conversation with someone at a police department in another community who indicated that walking into a recognizable office to receive mental health support can be a deterrent for some officers and that telehealth was a way around this.

Pacheco said that he thinks the city should look into what it can do to raise awareness that mental health issues are real, noting that Wyoming regularly has one of the highest suicide rates in the country. He said that the city should think about how to encourage people to understand that “if you are struggling, it is okay to get help.”

Belser said that the city does try to share information with employees, but that it seems some don’t read the information they are provided. She said that she thinks the biggest gap in mental health support for this city is in terms of crisis resources. The Human Resources/Support Services Department is exploring how it can better connect employees with crisis resources.

Further details about what mental health and other health services are offered to city employees and ways that the police, fire and human resources departments are doing to improve such services can be found in a memo from city staff included in the council’s work packet for Tuesday’s discussion.