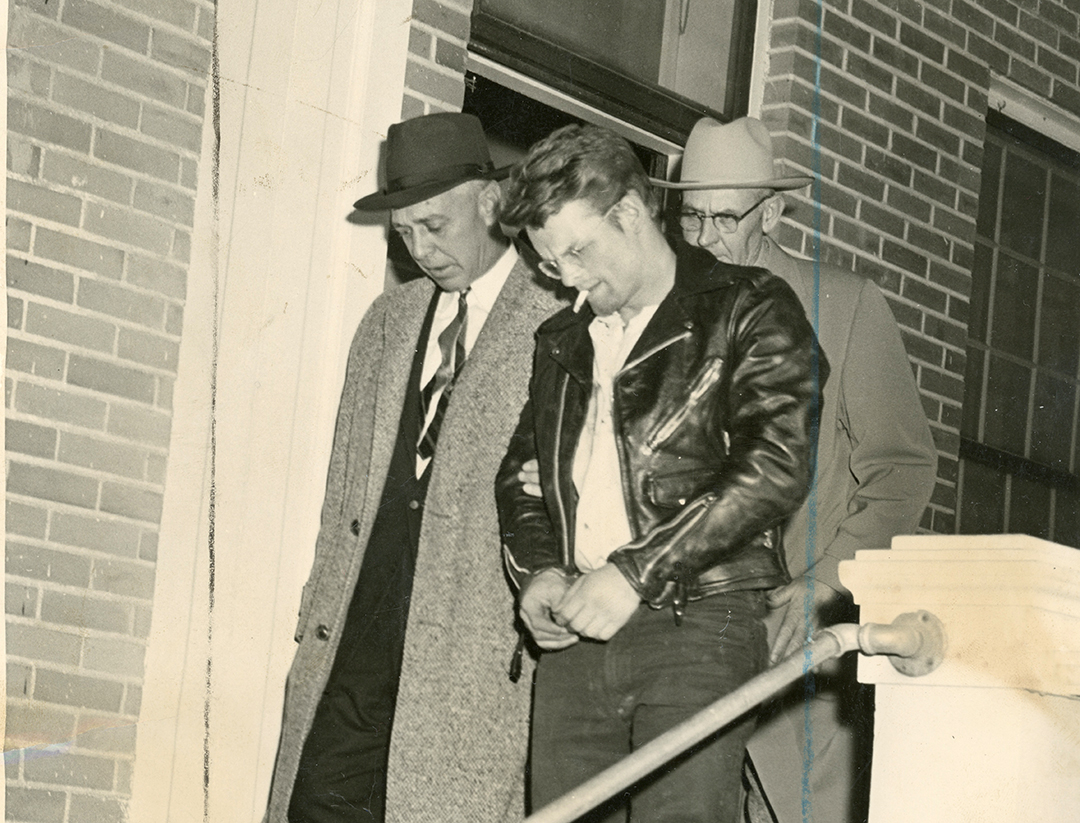 Charles Starkweather is taken from the Converse County Jail on Jan 1, 1958. Starkweather was involved in one of the area's most infamous killing spree that left 11 people dead, including a child. (Photo by Chuck Morrison, Morrison Collection, Casper College Western History Center)

CASPER, Wyo. — Douglas, Wyoming is likely little known to people outside of central Wyoming, but in January 1958, the small town became a media epicenter with a terrifying week-long murder spree that started in Lincoln, Nebraska before ending in Wyoming.

Media at the time was transfixed by the story of a swaggering killer, his teen girlfriend, and the couple’s deadly road trip that ended in a high speed chase and shootout. After it was all done, 11 innocent people had been killed entirely at random.

Born poor, bow-legged and mercilessly teased for a speech impediment, Charles Starkweather stewed with anger through childhood. By 18, he had dropped out of school and delivered papers and hauled trash for income. He also became romantically involved with a 13-year-old girl named Caril Ann Fugate.

According to wyohistory.org, it’s parental disapproval of the relationship that sent Starkweather over the edge.

Described in later reports as a “swaggering good-for-nothing in blue jeans and a black motorcycle jacket,” Starkweather started his murder spree by killing gas station attendant Robert Covert, 21, on Dec. 1, 1957.

That murder went unsolved for the next several weeks as Starkweather’s violence escalated.

On Jan. 19, 1958, Fugate says she came home to find only Starkweather, who she said threatened to kill her stepfather Marion Bartlett, her mother Velda Bartlett, and her half sister, 2-year-old Betty Jean Bartlett. In reality, all three were likely already killed, bodies hidden in outbuildings on the property.

After seven days hiding in the home and sending off visitors, the pair drove 15 miles to 70-year-old August Meyer’s home in Bennet, Nebraska. Starkweather had bogged the car down in mud, and Meyer offered help. Instead, Starkweather shot the man in the head before breaking the weapon while beating Meyer’s dog to death.

Fugate testified later that his sadistic outburst made her believe her only option was to obey Starkweather’s every command.

The next round of violence came hours later when Robert Jensen, 17, and girlfriend Carol King, 16, offered the couple a ride. Starkweather raped King before shooting them both to death, leaving their bodies in a storm cellar.

Now driving Jensen’s car, the couple headed back to Lincoln looking for shelter. They ended up in the home of local businessman C. Laurer Ward, his wife Clara, and housekeeper Lillian Fencil, who all perished at Starkweather’s hands.

Driving Ward’s 1958 Packard, the couple fled Nebraska and headed to Washington State by way of Wyoming.

In Wyoming, Starkweather decided the stolen, new luxury automobile was too conspicuous and needed to be replaced.

Near the turnoff to Ayers Natural Bridge, he came upon traveling shoe salesman Merle Collison, 37, who had stopped for a nap in his car. When Collison refused to exit his vehicle, Starkweather shot him several times through the window.

Starkweather couldn’t figure out how to disengage the parking break in Collison’s car, stalling the vehicle several times while trying to leave the scene.

During this, Casper resident and Sinclair Oil man Joe Sprinkle stopped his vehicle to assist what he thought was a stranded couple.

When Sprinkle noticed Collison’s body, Starkweather grabbed his shotgun but was unable to shoot when Sprinkle put up a fight.

Just then, Natrona County Sheriff William Romer drove up to the scene. Fugate ran to the officer screaming while Starkweather jumped back into the Packard and started toward Douglas.

Romer gave chase and radioed for help. Douglas officers set up road blocks, which Starkweather blew through. The chase exceeded 100 mph through downtown Douglas. Converse County Sheriff Earl Heflin fired while in pursuit, shattering the Packard’s back window and spraying glass through the car.

Starkweather, slightly wounded and bleeding, stopped the car. More shots were fired before the killer surrendered.

Wyoming Governor Milward Simpson was known to be against the death penalty but deferred the case to Nebraska prosecutors.

On January 31, Starkweather was returned to Nebraska and stood trial in May. He was found guilty and sentenced to death, and on June 25, 1959, he died in the electric chair.

As for Fugate, Starkweather originally claimed she was a “captive” and had nothing to do with the murders. He later changed his tune. It also appeared when Fugate was taken into custody in Douglas that she didn’t realize her parents had been killed. When she as told of the murders days later, she “broke down, twisting tissues into tiny doll shapes.”

When Natrona County Sheriff officers testified against her, Fugate was sentenced to life in prison. She spent 18 years in the Nebraska Correctional Center for Women and was a “model prisoner” before being paroled in 1976.

She now reportedly lives in Michigan and still maintains she never willingly participated in the spree.

Photos from Starkweather and Fugate’s capture and arrest made by Casper Tribune-Herald photographers Chuck Morrison and Carl Ketchum are preserved at the Casper College Western History Center.

The full story of Starkweather’s rampage can be read in Lesley Wischmann’s article for wyohistory.org, where much of the information for this post was gathered.