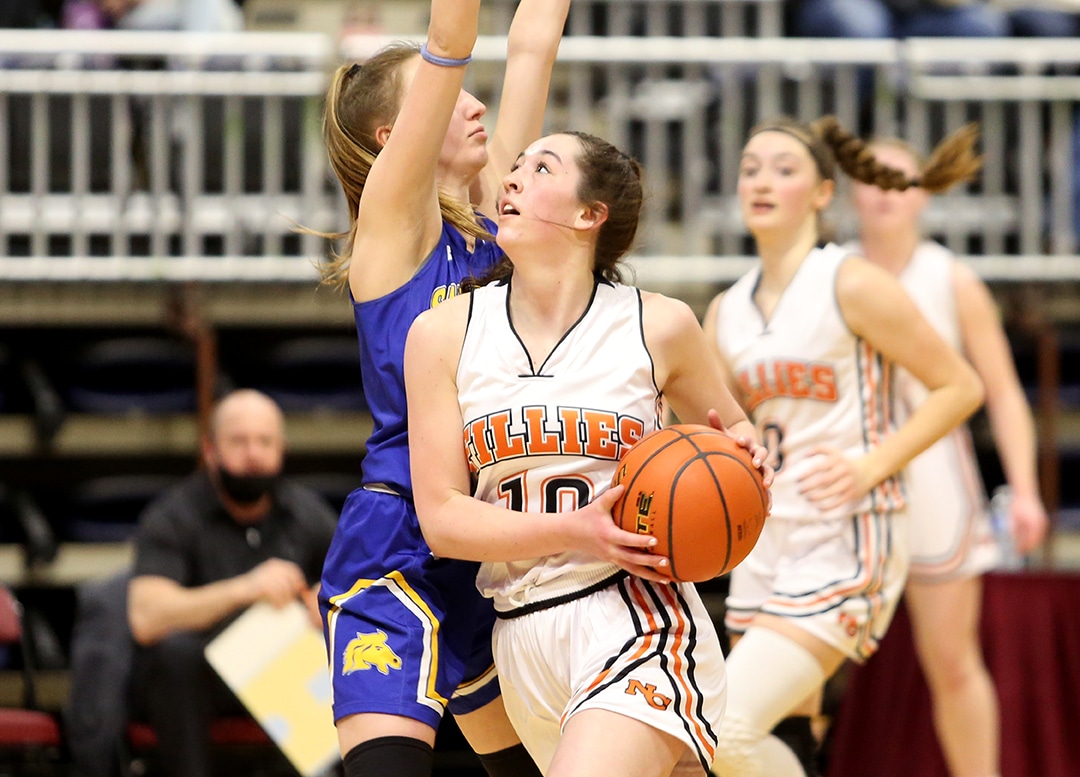 CASPER, Wyo. — It took a bit for the early nerves between Natrona County and Laramie girls basketball to go away in their game Thursday.

After all, it was each teams’ opening game of both the year and the Oil City Tip-Off, a three-day event that is being held between NCHS and Kelly Walsh High School. Things weren’t going to be perfect right out the gate, but for a while, they were far from it.

Natrona survived a late push from Laramie that sent the game into overtime by going on an 11–4 run in the final period to clinch win No. 1 in game No. 1 in a 44–37 victory.

The score was a 4–3 Fillies lead at the end of the first quarter and stayed that way for over half of the second, but thanks to a game-high 19 points from guard Megan Hagar — 11 of which came in the second half and overtime — Natrona got over the hump and managed to begin its 2021-22 season with a winning beginning.

“You always learn a lot from your first game,” Fillies coach Brian Costello said. “You learn what you’re doing well and what you need to work on, and we found a lot of things we need to work on. But I love our effort. I love our kids, how they play for each other.”

The dull start to the game was by design for Natrona in one way and completely unintended in the other. Running a 1-2-2 press that sped up Laramie’s backcourt and forced it to commit turnover after turnover, the Plainsmen couldn’t buy a bucket for most of the first half as they’d often either lose the ball or force a tough shot.

Meanwhile on the opposite end, Natrona valued possession of the ball and looked for high-percentage looks early on, except they just wouldn’t fall. Hagar didn’t score in the first quarter while reigning All-State guard Emma Patik was limited to one point in the first half, leaving two of the Fillies’ cornerstones to have to grow into the game.

“I think we all just as a team collectively had that first-game jitters,” Hagar said, “but I think as the game went on, we started getting more and more comfortable and less uptight and not wanting to make a mistake, and more just playing for each other and how we know how to play.”

The floodgates eventually opened somewhat. Natrona didn’t knock down a 3-pointer after halftime, instead opting for close-range looks that had better chances to fall down. That worked well for the Fillies to build a 20–12 lead in the third quarter, but the Plainsmen stormed back with 25 of its 33 points in regulation scored after half.

But overtime seemed to urge the Fillies’ backcourt to put the game out of reach for good. Hagar set the tone with a tough and-1 make to make it 36–33 with 3:24 to go in overtime, while she and Patik overall combined for 10 of Natrona’s 11 points in the extra four minutes. Laramie never sniffed a tie or another claim to the lead again.

“I think it was a really big step for us,” Hagar said. “Definitely in a positive direction. I think just knowing we can persevere as a team and get out of situations like that will help us with our confidence overall.”

Natrona takes on Cheyenne South in Day 2 of the Oil City Tip-Off at 6 p.m. Friday at NCHS’s main gym. Laramie will play Green River at 3 p.m. Friday as part of the event, also in the NCHS main gym.