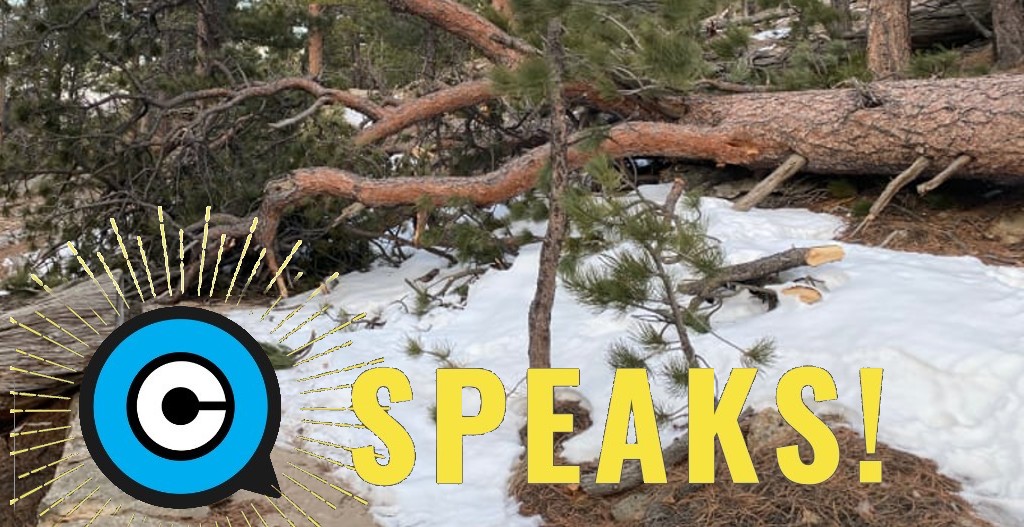 CASPER, Wyo. — Good afternoon, everyone, and happy New Year! How have you been dealing with the howling winds Casper has been seeing in recent weeks? Are you cheering on Wyoming-born speedskater Brianna Bocox in her quest to make the Olympics? What do you think of ART 321’s plans to host challenging exhibits in a new “Immersive Installations” show?

We’ve gathered reader comments that touch on all those questions and more in the first 2022 edition of Oil City Speaks!

Anyone who grew up in Casper knows that strong wind is nothing new, but you can hear a lot of chat around town about winds this season seeming worse than usual. People have seen trees blow over on their properties and strong winds have led to concerns about the stability of structures like the eagle statue in Mills. Casper recently had to take down flags at City Hall and the Hall of Justice due to stressed poles in the wind as well.

How have you been coping with the strong winds? Do you have any creative ways of viewing the gusty conditions in an enjoyable or humorous light? Do you think strong winds affect the culture of the community? If you were to make something, what would you create that is inspired by the wind? Did you know that the root word of “inspire” stems from the Latin word spir that means “to breathe”?

If you celebrate a birthday around the New Year, happy birthday! And merry un-birthday to everyone else!

What do you think is the best way to celebrate a new person coming into the world? Do you have any great birthday memories in Casper? What are you looking forward to for the year ahead?

Bocox has two more chances to qualify for the Olympics after narrowly missing out in the Women’s 1,000 meters at the United States Olympic speedskating trials on Thursday. The top two finishers advance to the Olympics.

Bocox will be skating again at the U.S. Olympic speedskating trials in these competitions:

In response to the story about ice melt and driving in Casper, some readers complained about the fact that the ice melt used by the city isn’t as effective in very cold temperatures. The city said that when temperatures are in the single digits or below zero, ice melt is only used in intersections and on hills since the ice melt is less effective (and in order to be more fiscally responsible).

Do you think city efforts such as snow mitigation sometimes get too much grief from the public? Does the reduced effectiveness of the ice melt in frigid temperatures frustrate you?

Who in Casper hasn’t complained about the wind before? Why do you think weather-related topics are something people seem to like to complain about? Is it because the weather is something that is a backdrop to everyone’s experience in the community and serves as shared common-ground for conversation? Is it because people can vent about the weather without hurting its feelings? Is it simply because it is fun to complain sometimes? Or is there something more serious about these complaints that needs to be taken more seriously?

Do you think it matters why someone may have complained to the health department about the art show? Are you glad that someone is working to ensure public health safety at a public event?

Are you glad to see ART 321 making space for some challenging art? Do the concerns people express about a thing amplify your interest in that thing? Are you more or less likely to go see the show after hearing people have complained about it, or is that irrelevant to you?

Attracting wildlife to a developed area is one of the problems Game and Fish said that feeding wildlife creates.

“The animals are continually crossing roads where they are hit by vehicles or chased, and sometimes killed, by homeowners’ dogs,” Game and Fish said. “Just being in close proximity to humans generally elevates the stress on these animals.”

“On the other hand, if an animal becomes habituated to human contact, it may lead to human injury. People and often children are fooled into thinking an animal is tame and may try to approach it. These animals are still wild and may unexpectedly strike out in self-defense or defense of [their] young.”

“Wild animals are generally very habitual,” Game and Fish said. “Once fed, they will often return the following year with their offspring and others and will soon overwhelm the hobby feeder. In addition, they may also lure in predators such as coyotes, mountain lions or domestic dogs, which are often attracted to large groups of prey animals.”