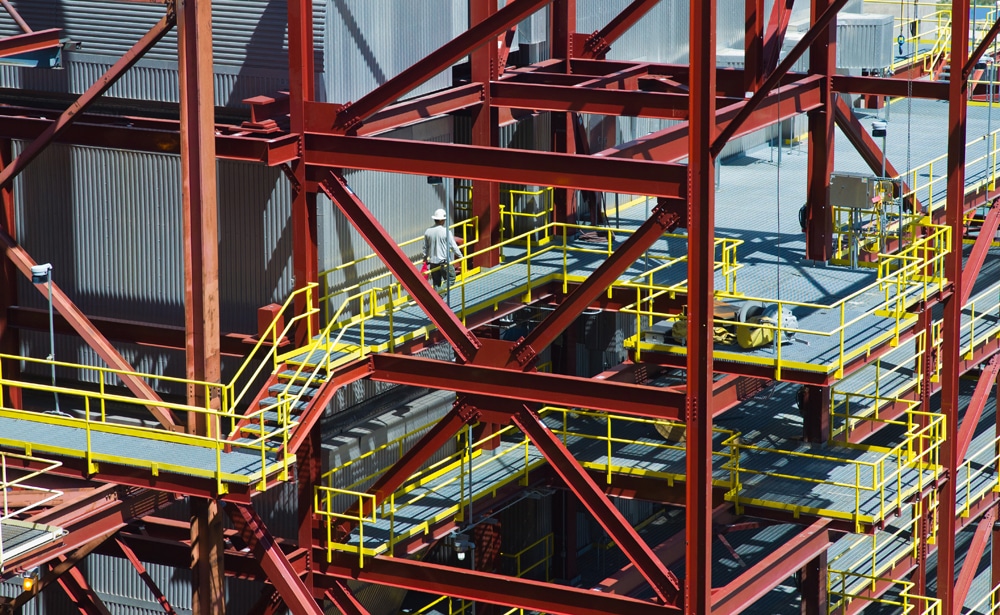 The brighter paint on a stories-high pollution control unit added to Jim Bridger in 2015 stands out from the weathered steel of the original plant. (Angus M. Thuermer, Jr./WyoFile)

PacifiCorp had roughly 8 years to comply with regulation. State asserts EPA is reneging on deal to meet pollution standards via other methods.

The decision may result in the closure of Jim Bridger unit 2 as early as late February and unit 1 by year’s end. There are four coal burning units at PacifiCorp’s Jim Bridger plant, which employs about 700 people.

The Bridger surface mine, which supplies coal to Jim Bridger, employs about 187 workers.

“If finalized, EPA’s proposed action to disapprove the state’s revised plan will require PacifiCorp to adhere to the requirements of the existing regional haze plan, which has been in place since 2014, absent an approvable plan revision from the state,” EPA said in a press statement.

“PacifiCorp will continue to work with the EPA and the state of Wyoming in seeking a resolution that would avoid an early shutdown while maintaining compliance with regulatory requirements,” PacifiCorp spokesperson Tiffany Erickson said.

The 2014 plan required PacifiCorp to install “selective catalytic reduction” controls at Jim Bridger unit 1 by the end of 2022 and at unit 2 by the end of 2021. Instead, the Berkshire Hathaway owned utility giant that operates as Rocky Mountain Power in Wyoming, joined the state in drafting an alternative plan that would allegedly meet the same regional haze emission parameters by operating the two units at lower capacities.

But EPA said the proposed revision is flawed, and it will instead enforce the existing regional haze plan.

Gov. Mark Gordon filed an emergency suspension order on Dec. 27 attempting to block the EPA from forcing a shutdown at the power plant.

“While not completely unexpected, EPA’s decision to disapprove the revised State Implementation Plan is a disappointing reflection of a federal agency acting in bad faith,” Gov. Mark Gordon said in a press statement Wednesday evening. “EPA’s backtracking and subsequent refusal to adopt an agreement previously approved by the regional office and EPA headquarters could impact the loyal workforce of the Jim Bridger Power Plant and coal mine.”

EPA is expected to file its decision to deny Wyoming’s proposed regional haze revision Jan. 18, which would initiate a 30-day public comment period. The federal agency could take enforcement action regarding Jim Bridger unit 2 immediately after it responds to public comments.

It’s unclear whether the EPA is cooperating with Gordon’s suspension order, which would block federal enforcement actions at Jim Bridger through the end of April.