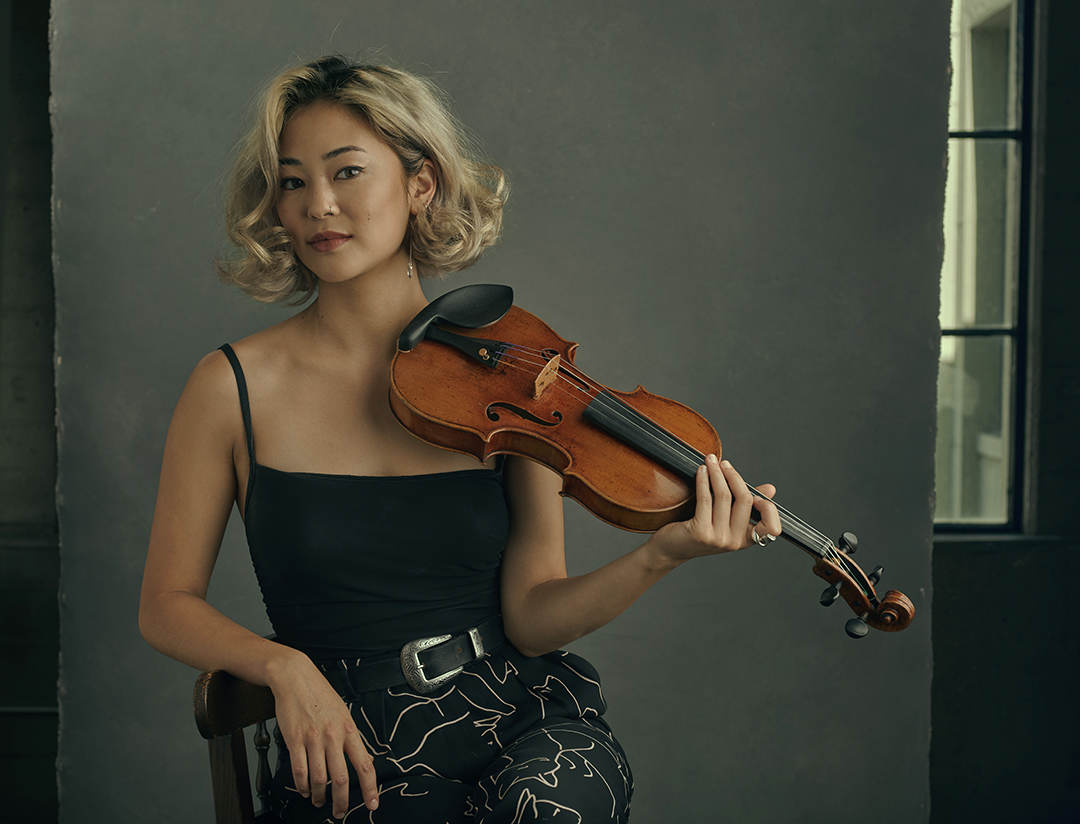 Concert violinist Simone Porter is seen in a promotional image. Porter will be performing with the Wyoming Symphony Orchestra this weekend. (Elisha Knight Studios)

CASPER, Wyo. — To say that Simone Porter’s rapid growth as a musician has been extraordinary would be an understatement.

She first picked up a violin at age 3, played in front of a major symphony orchestra at age 10, and now in her early 20s is one of the most sought-after soloists in the business.

According to Porter, it all started thanks to a simple “greatest hits” CD of arias her parents owned.

“I became infatuated with it when I was like 2,” said Porter, talking by phone from her Los Angeles home earlier this week. “That led to further exposure to classical music, and I found out I loved the violin and bugged my parents until they let me start.”

Porter grew up in Seattle with parents who are educators and music fans but not musicians themselves, which Porter sees as an advantage.

“They really did advocate for the importance of work ethic and commitment, but they weren’t able to pressure me specifically about the violin,” she said. “They taught me to respect the instrument and any endeavor without it being specific to the violin.”

Porter was 10 when she performed the third movement of Mendelssohn’s violin concerto with her hometown orchestra, which left an indelible impression on the young artist.

“I was ecstatic,” she recalls, “but I also remember being backstage and wondering how the hell I was going to walk out to the middle of the stage.”

She’s walked onto a lot of stages since then, playing with some of the world’s largest organizations ranging from the Royal Philharmonic Orchestra in London to the Los Angeles Philharmonic. She’s played in the Hollywood Bowl and Carnegie Hall, and has worked with superstar conductors Esa-Pekka Salonen and Gustavo Dudamel.

This Saturday she will perform Beethoven’s Violin Concerto with the Wyoming Symphony Orchestra.

“The Beethoven Violin Concerto I think is the pinnacle of the violin repertoire,” said WSO music director Chris Dragon, who was in Casper early this week to prepare for the weekend’s performance.

“I think for a violinist it’s one of the more difficult violin concertos because there is so much depth to the piece,” he said. “It’s not showy and flashy, but it takes a lot of emotional maturity to be able to perform this piece.”

“This is actually a piece I’ve never conducted before so I’m excited to finally sink my teeth into it,” he said. “I’m so thrilled that I get to do it with her.”

Dragon and Porter performed the Mendelssohn concerto in Colorado last year, and both are excited to be collaborating again.

“This is a level of playing that I’m thrilled that Casper audiences will get to experience,” said Dragon.

“One of the things I’m looking forward to the most is reuniting with Chris,” said Porter. “He’s really fantastic to share a performance with; he’s so attentive and has a wonderful ear and is a generous musician.”

The concert program will be rounded out with a performance of Haydn’s Symphony No. 94, known as the “Surprise” symphony. The name comes from a slow, gentle second movement that Dragon says is punctuated with a crashing chord.

“If you’re aware of this chord and you’re at the concert, it might be a good time to look for someone who might not be aware,” said Dragon, “and hopefully people jump or scream.”

“It’s very humorous; there’s always a little joke here and there that [Haydn] tried to incorporate in his work.”

Dragon says there’s an added through-line for this week’s concert, which is titled “Illumination.” Haydn was one of Beethoven’s most influential teachers, and for his symphony’s performance the WSO will be joined with several Casper College music students on stage.

“Having them has actually added a really fun dynamic to our string section,” he said.

After performing in Casper, Porter will demonstrate her impressive range of repertoire by performing a recital in Boston next month featuring new works by 21st-century composers, including premiering a work she commissioned from composer Reena Esmail.

Her schedule is busy again after the 2020 pandemic lockdown, which Porter looks back on rather fondly.

“So listening to music and loving music, and being away from the instrument was fantastic for me in a productive way,” she said.

Violinist Simone Porter will perform with the Wyoming Symphony Orchestra on Saturday, January 29 at the John F. Welsh Auditorium. Doors open at 7 p.m. Tickets are available at the WSO’s website or by calling 307-266-1478.