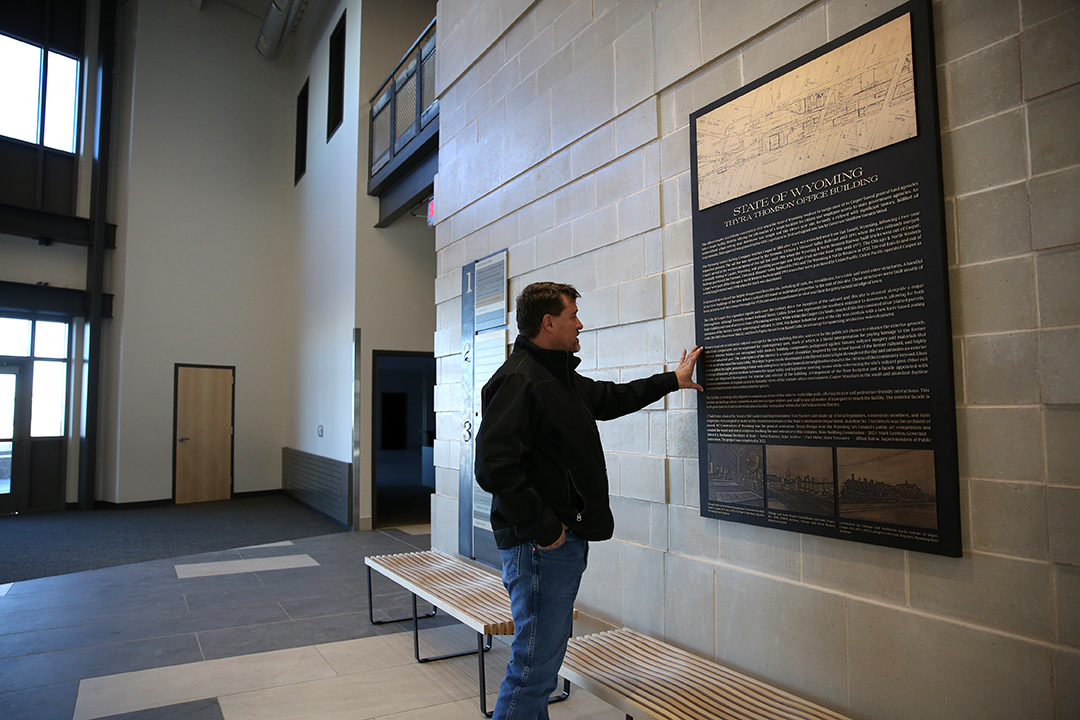 Architect Lyle Murtha points out a large plaque that tells the history of the site and building in the lobby of the new Thyra Thomson Office Building. The map at top is the earliest map of the site the architects could find. Murtha says it was found on eBay, and a digitized copy was given to the State Archives. (Dan Cepeda, Oil City)

CASPER, Wyo. — It’s been decades since massive steam engines rumbled through a section of Casper just north of Natrona County High School, but the new Thyra Thomson Office Building, set to officially open later this month, makes sure this period of Casper’s history is not forgotten.

“A lot of the design work is based on the history of the site,” said Lyle Murtha, president of the Stateline No. 7 Architects firm that was commissioned to design the new state office building.

The site was first built up by the Wyoming Central Railway Company in 1888, and became an essential ingredient to Casper’s development as an energy and financial hub in Wyoming.

When visitors first walk into the building’s main entrance, they’ll be greeted with stone and brickwork resembling the industrial architecture of the late 1880s. Design elements representing the train industry abound, particularly with the main lobby’s chandelier, which gives nods to tracks and roundhouses. “The lines going out are representative of the rail lines coming in, and then the lights themselves are representative of the boxcars on the train,” Murtha said.

Weathered wood and steel are used as accents on all three floors, including on agency signs and in conference rooms.

Subtle hints of trains and tracks are echoed throughout the building. A movable wall enclosing a state-of-the-art meeting room on the second floor features vintage train engine photos on a nearly-transparent floor-to-ceiling glass panel.

The building’s most-visited agencies will be located on the first floor, including the Department of Corrections probation and parole office, and workforce employment training and rehab. Major agencies like the department of family services, the Livestock Board, and the Department of Environmental Quality will be on various floors.

The 127,000-square-foot building will contain 12 state agencies, including a new Chancery Court, which is on the third floor. “Pretty much every general fund state agency in the city is now going to be in this building,” said Murtha. The agencies are currently spread out among several locations across the city.

Some 350 to 400 people total can occupy the building, allowing flexibility as agencies contract and grow depending on economic pressures.

Murtha said he started initial plans on the building in 2013. The railyards on the site were long gone and had been occupied by a series of warehouses, along with industrial and commercial buildings. After pushback from tenants was addressed, demolition of the properties on the 11-acre site began in late 2018 and construction started the following year.

The $45 million cost of the project came from mineral revenue and other investments, task force member Rep. Steve Harshman (R-Casper) said in 2019, adding that no taxpayer money was used in financing the project and the building will pay for itself in about 12 years. Murtha said the project ultimately came in under budget.

Agencies will start moving in late this month, starting a process that will take a number of weeks to complete. Other site work, particularly landscaping, will continue through spring.

“It’s been fun shepherding it along,” said Murtha of the project, “and now it’s like your baby graduating and going out into the world.”