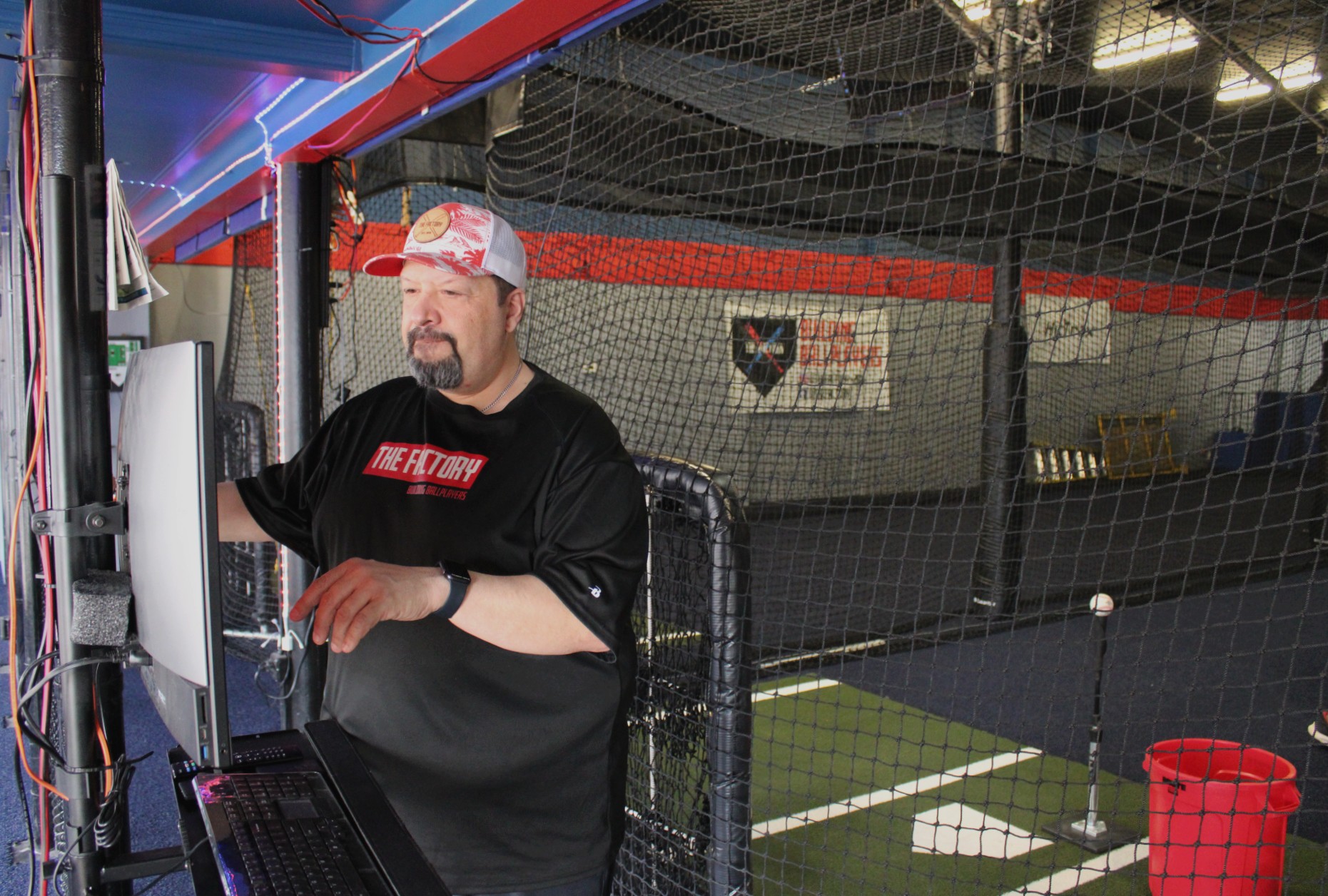 The Factory owner Jerry Inniss adjusts settings for his batting cages Monday afternoon at The Factory’s location on 17th Street in downtown Cheyenne. Originally just a single batting cage for private use by his son and daughter dating back to 2015, The Factory opened up to the public last month with two new cages, seating and table areas as a new outlet for baseball and softball players in the city to work on their game. (Briar Napier/Cap City News)

CHEYENNE, Wyo. — The baseball and softball communities in Wyoming are a passionate bunch, but are also sometimes limited by their circumstances.

Baseball isn’t a Wyoming High School Activities Association–sponsored sport (although softball is), meaning that travel teams make up one of the more common outlets for big league–dreamers to play competitively. Outside of the bigger cities, batting cages are often rare, and Wyoming weather is rarely calm enough to make for a game where it isn’t a factor somehow.

These circumstances called out to longtime Cheyenne-area baseball coach Jerry Inniss, who decided to do something about it. Even in Wyoming’s biggest city, he said, options can get limited for players to work on their games.

“We needed something to help kids develop,” Inniss said. “When they’re in an organization, there’s access to that stuff. But when they’re not, there’s no access to that. … And so that’s where I really felt like it needed to be something available to the public.”

That “something” is The Factory, a newly opened indoor batting cage center and hangout spot on 17th Street downtown. And though it just officially opened to the public last month, it’s been an idea building in Inniss’s head since he installed a cage in a backroom of the building in 2015 for private use by his son, daughter and family friends.

That cage is still operating today, as are two brand-new ones that suit every type of ballplayer. With an extensive analytics system hooked to the cage that measures every swing and/or ball thrown, a college pitching prospect can get instant reads on their velocity, placement and curve with wicked precision. At the same time in an adjacent cage, a group of children celebrating a birthday party can have their cage settings programmed into a home-run derby against each other for bragging rights.

The versatility of The Factory is a planned feature of Inniss’s second downtown business venture, as he also owns the 2 Doors Down restaurant. The two businesses are neighbors, too, and Inniss has installed a door directly inside that allows for easy access between them. With a private seating space overlooking the cages as well, families can grab a burger at 2 Doors Down, walk through the door to The Factory, and watch their son and/or daughter swing away, among plenty of other possibilities.

“The training aspect and the entertainment part of it was primary, but the availability to have the restaurant right there is really important, too,” Inniss said. “We invested not only in ourselves but in our community. It’s something that I think the community really needed. … I’m very passionate about it, and I’m really passionate about helping kids learn, helping parents be involved, having an understanding of what [The Factory] can do.”

Since opening to the public, word has spread like wildfire across the local baseball and softball communities. Plenty of patrons have come from right in town, Inniss said, but also from other local cities like Laramie, Wheatland and Torrington and even as far as Scottsbluff, Nebraska.

And though catching up with families and old friends made through his many days coaching on the travel ball circuit is always nice, Inniss noted, helping introduce a new child to the game is one of his favorite parts of his job. Through The Factory and its many possibilities in a unique indoor setting, Inniss’s job will be made just that much more fun.

“We want to be instrumental in helping them and if we can give them pointers, we do,” Inniss said. “We want to provide a really good, consistent service. … It’s just fun to see the kids smile and enjoy it when they do something good.”