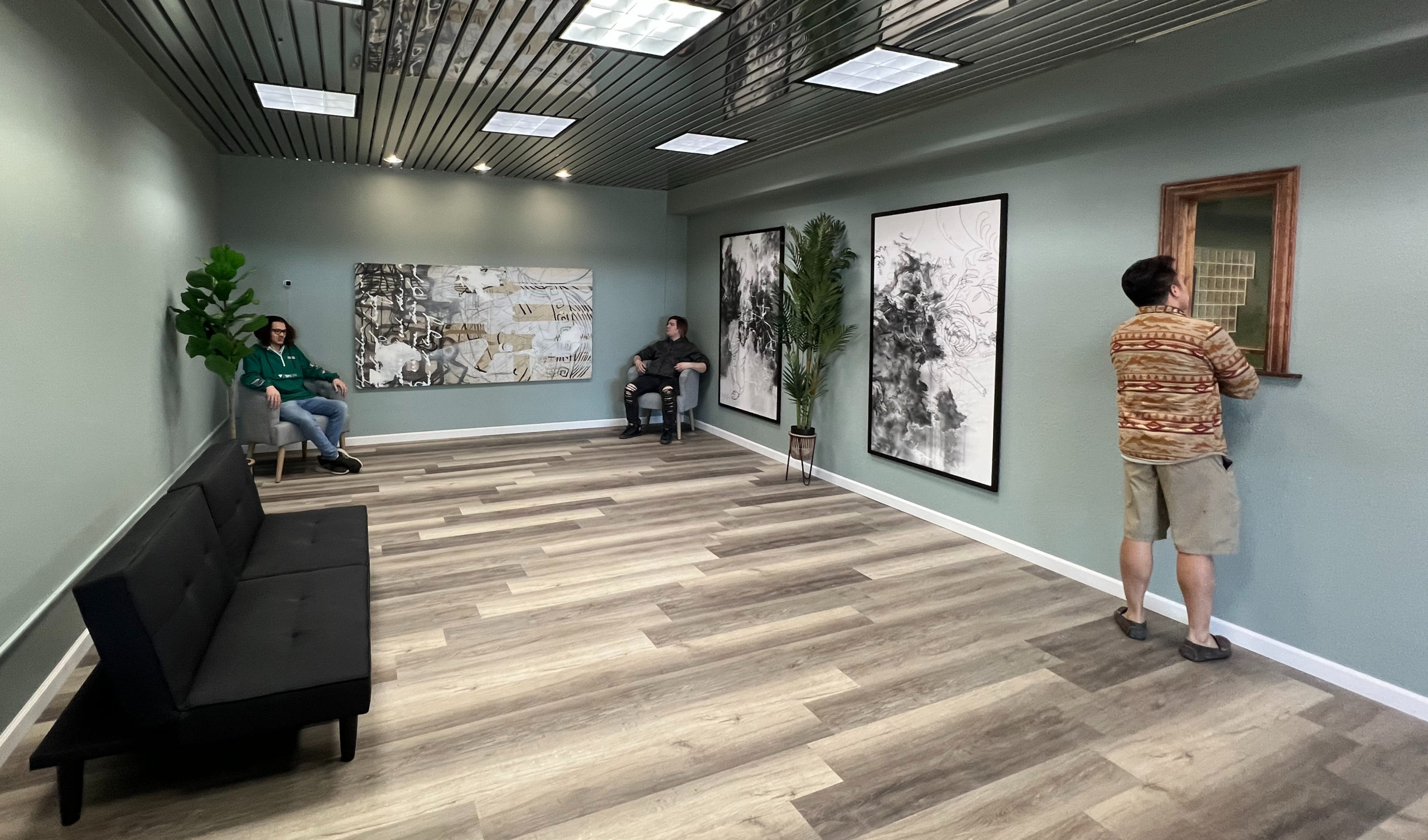 The Green Room co-owners Kobie Waddy, left, and Chris Howe sit between two ferns while co-owner Paul Yohe demonstrates where customers will be asked to show ID inside the lobby of the business's new east side Casper store. (Brendan LaChance, Oil City)

CASPER, Wyo. — The Green Room will celebrate 4/20 with the grand opening of its second Casper location, a new east-side spot located near Benny Montanaro’s pizza shop.

While cannabis remains illegal in Wyoming and The Green Room sells only legal products that include delta-8-tetrahydrocannabinol (delta-8 THC) and cannabidiol (CBD), owners Kobie Waddy, Chris Howe and Paul Yohe are not shy about advocating for legalization of cannabis.

“We have people come in all the time talking to us about legalization, seeing what we know, comparing knowledge, so that way we can keep up with what’s going on,” Waddy said Thursday inside of The Green Room’s new 317 Thelma Drive store.

The Green Room tries to help with cannabis legalization efforts by inviting people to sign petitions. The owners and staff also want to address what they see as an inaccurate perception about who finds benefit in using CBD and delta-8-THC products.

“I’ve had [customers] who have just freshly turned 18 all the way up to people who have been born in 1944,” Waddy said.

While the store has a variety of CBD and delta-8-THC products, there is one type of product the store doesn’t carry that Yohe drew attention to — nicotine.

“We wanted to stay away from the nicotine feel of it,” Yohe said, noting that The Green Room doesn’t see itself as a smoke shop.

Instead, the business is leaning into a design more akin to a dispensary, albeit one that doesn’t sell delta-9-THC, the cannabinoid molecule found in cannabis that is still outlawed in Wyoming. Part of that design decision is meant to show that The Green Room doesn’t think people who use CBD or delta-8-THC products need to hide, something Waddy, Howe and Yohe say is common in Casper.

“We wanted to change that,” Yohe said. “We’re going to start doing a lot more dispensary-like things — open weighing or weighing in front of the customers. We have flower on our shelves and everything.”

The owners say that being open and transparent about who they are and what they sell has led to a comfortable professional relationship with local law enforcement.

Howe said that since opening the first store in downtown Casper, The Green Room has never had any problems with the Casper Police Department. Yohe added that with the downtown store located near police headquarters, it is common when staff leave the store to pass by officers.

“They’re all extremely friendly with us and everything,” Yohe said.

The only time officers came into the downtown store was after a break-in, and the owners say officers were helpful and professional.

“They only cared about our testimonials regarding whoever we were dealing with,” Howe said. “They were super helpful.”

While they can legally sell delta-8-THC, the owners caution prospective customers that urine analysis tests do not always reliably differentiate between delta-8-THC and delta-9-THC.

The new east-side store opens into a lobby that includes space where local artists can show their work. Paintings by Roy Upton are the first on display inside the new gallery.

“We’re actually going to be letting all the artists sell their work and we’re not going to be charging them anything,” Yohe said.

The Green Room is also thinking about working with Benny’s to hold some outdoor music events this summer.

While the store is already open for business, the grand opening on 4/20 will feature special deals, prizes and giveaways. Products available are similar to what The Green Room offers downtown, and a new line of slushy products featuring a range of flavors will soon be available as well.

Correction, April 11, 2022: This article has been corrected to state Paul Yohe is an owner of The Green Room.