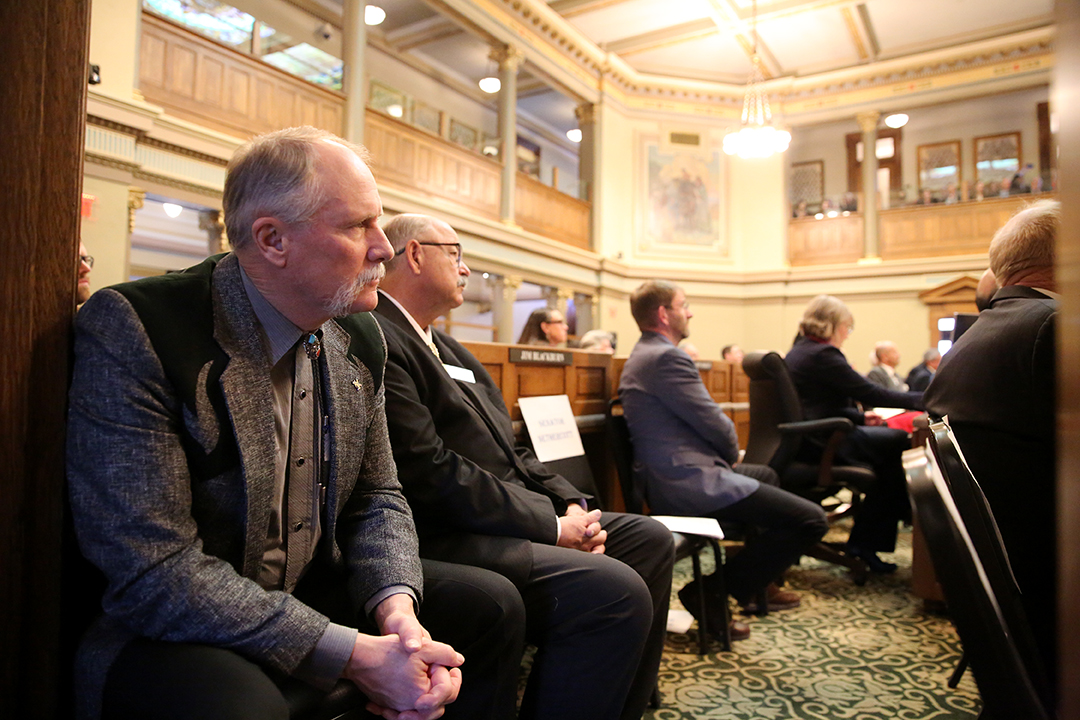 Gun lobby group led by an out-of-state provocateur continues to flex its muscle in Cheyenne using tactics some describe as bullying and intimidation.

The man had already left one voicemail on Sen. Larry Hicks’ (R-Baggs) personal cell phone. By the second message, the senator could tell from the caller’s voice he was “crazy mad.”

Hicks wasn’t shocked by the threatening call. “This is their intimidation tactic,” he said.

The gun owners group, founded more than a decade ago by Sen. Anthony Bouchard (R-Cheyenne), was supporting a similar bill, Senate File 87 – Second Amendment Preservation Act. That bill had a big distinction — it let residents sue cops — and it failed during the Wyoming Legislature’s 2022 Budget Session.

Hicks had drawn WyGO’s ire in years past. But he’d never experienced the flood of correspondence that came when his bill was being worked in committee.

“There were over 100 text messages on my phone,” Hicks said. “Thirty-some phone messages on my cell. Half a dozen at home. My staff said there were three or four at work, and a couple on staff cell phones.

“It is an all-out campaign,” he added. “Emails, phone messages, text messages, anything they can get their hands on.”

The deluge directed at Hicks was orchestrated by a group that’s repeatedly pushed controversial gun bills at the Wyoming Legislature. Operated by far-right Iowa activist Aaron Dorr, the organization campaigned against lawmakers it labeled as moderate in the 2020 Republican primaries. The group drew outrage from top lawmakers for its campaign tactics and were investigated by the Wyoming Attorney General for failing to disclose its donors.

A federal judge ultimately ruled that the Wyoming election law Wyoming Gun Owners was accused of breaking was itself unconstitutional.

There’s been a spate of media attention about the Gun Owners-aligned groups, which operate in a dozen states, including a Pulitzer Prize-winning podcast, No Compromise, that spotlighted the Dorr family and their collaborators, who opponents describe as scam artists.

Although the gun bill the group backed in Wyoming this year fell flat, WyGO’s role and influence in Wyoming politics do not appear to have diminished. Some observers say lawmakers are afraid of and beholden to the group, for fear of ending up a target. Other lawmakers who have been targeted told WyoFile its members have them afraid for their lives.

“I’m concerned about [WyoGO] having incredibly unhealthy followers that are rabid,” said one lawmaker who had heard the voicemail left on Hicks’ cell.

“That guy is not well,” the lawmaker said of the caller. “That guy is unhinged. If he was in the Capitol, how would we feel about that?”

The lawmaker asked to remain anonymous out of fear for their physical safety. Specifically, the lawmaker worries about the prospect of a shooting at the State Capitol.

The lawmaker described a situation in which a fire alarm sounded in the statehouse during a previous legislative session. The individual wouldn’t leave the building for fear that it was a setup, designed to herd senators and representatives toward an awaiting shooter.

“The potential is easily there,” the lawmaker said.

Dorr, who traveled to Cheyenne a couple times during the 2022 budget session, declined to engage in hypotheticals about his members’ conduct when WyoFile caught up with him at the Capitol.

“I’ve never had a gun owner — one of our members — go to an area beyond aggressive support for gun rights,” he said.

Rep. Bob Wharff (R-Evanston), who WyGO endorsed, said it’s unfair to fault the organization for the actions of its members.

“When somebody is a member, they pay a membership fee,” Wharff said. “Aaron [Dorr] is the one that speaks for Wyoming Gun Owners.”

Wharff has had to navigate similar waters, he said. Formerly the executive director of Wyoming Sportsmen for Fish and Wildlife, he once had to call and apologize to then Gov. Dave Freudenthal for an inappropriate call that one of his members made, he said.

Hicks wasn’t passively inundated with messages. He sent some of his own. Bouchard shared a text thread with WyoFile, which shows the Baggs senator sent him 11 messages in a 15-minute span. The messages ranged from “Why do you hate cops” to “Run a good sapa bill” to “Why did you molest a child” — an apparent reference to reports that Bouchard impregnated a 14-year-old girl when he was 18.

“I didn’t send 300 emails out and give everybody his phone number,” he said. “I texted him directly.”

Hicks’ experience as a WyGO target appears to be the exception, not the norm. Other lawmakers who have been WyGO targets said they were not subject to the same all-out communications campaign.

Former four-term Sen. Michael Von Flatern (R-Gillette) was a Gun Owners’ punching bag before WyGO-supported Sen. Troy McKeown (R-Gillette) defeated him in the 2020 GOP primary. Even though WyGO-funded YouTube campaign advertisements leading up to the primary election, pushed out Von Flatern’s cell phone number and encouraged members to ring him, no one dialed his digits.

“They never called me,” Von Flatern said. “Aaron Dorr used Facebook and said how no-good I was, and blah blah blah, because I wouldn’t back his quest for free guns for everybody.”

Von Flatern chalked up his loss to WyGO’s role in the 2020 elections.

“They have clout, and they use it in the wrong way,” he said. “I stood up against them and I got kicked out. They wanted a Trump person in there and I was never going to be a Trump person. I have too much thinking to do.”

The no-compromise strategy WyGO employs is unapologetically brash and confrontational. After the Legislature’s 2022 budget session wrapped up, Dorr took to Facebook to report to his members on how it went. He dubbed Hicks and two other senators “RINO traitors” — the acronym standing for “Republican in name only” — for pushing SF 102, which he described as a “destruction” of the Second Amendment.

The bill Hicks sponsored, and that Gov. Mark Gordon signed into law, prohibits state officials from enforcing federal firearms regulations. But it does not allow residents whose guns are seized by law enforcement officers to bring civil lawsuits against law enforcement agencies directly. Instead, it leaves enforcement to county prosecuting attorneys.

Hicks explained why his bill does not allow citizens to sue cops.

“Think of your smaller communities around Wyoming,” he said. “Some officer inadvertently confiscates a firearm in a domestic violence situation. Under their law [the failed SF 87], [Wyoming residents] could personally sue him and then go after his employer for other expenses.”

Hicks said he never considered giving into the pressure from WyGO and amending his bill.

“If you fold, they own you,” he said. “And what message does that show? In a leadership position I have to stand up for the institution.”

Hicks said there “absolutely” are fellow lawmakers who have folded to WyGO’s pressure to keep a target off their backs.

Former Rep. Dan Kirkbride (R-Chugwater) said he sensed that the WyGO pressure was getting through to his counterparts during his eight years in office.

“I think people in the Legislature begin to look over their shoulder, thinking, ‘Well, if I don’t vote for this they’re going to come after me,’” he said. “There’s almost an extortion to it. A bullying element.”

Kirkbride, who’s a rancher and gun owner himself, was defeated in 2020. WyGO-endorsed pastor and current Rep. Jeremy Haroldson (R-Wheatland), edged him in the Republican primary by an 8% margin. Dorr’s group ran ads against Kirkbride, branding him a gun-control fanatic.

“I was in office for eight years, and a county commissioner for eight years before that … and in all that time nothing was said,” Kirkbride said of his gun record. “But then for 33 days right before the election, I was public enemy No. 1. It was extremely effective. You’ve got to give them credit, it worked great.”

Hicks is a 12-year Senate veteran who’s up for reelection this year. Having just notched a victory over the Gun Owners by successfully pushing SF 102, he is confident a Dorr-backed challenger will vie for his seat. A self-described gun guy who said he owns dozens of firearms and travels the world to trophy hunt, Hicks scoffed at the “gun grabber” smear campaign that he expects is coming.

“Yeah, I’m a gun grabber,” Hicks jokingly said. “That’s right, I open my closet and there are so many guns in there I can’t ever figure out what one to grab.

“I’m not going to back down from doing the right thing,” he added. “I’ve got faith in the people of the state of Wyoming, and if I’m wrong, I’ve done the right thing.”

WyGO champions in the statehouse like Wharff have stood behind the tactics and rhetoric the Dorrs and their members deploy.

But those strategies earn quick rebukes from other fixtures at the Wyoming Legislature. Longtime lobbyist Marguerite Herman said the tactics she’s seen from WyGO stand apart from those employed by any other lobbyist or advocacy organization.

“It’s just pure muscle and intimidation: It’s crude, it’s artless, there’s no finesse to it at all,” Herman said.

The Legislature, she said, isn’t doomed to “a system where might makes right.”

“People have to be willing to not be elected. We need people who will say, ‘I’m not going to compromise my principles,’ and then hope that approach wins elections,” Herman said. “I really hesitate to castigate the electorate, but they should be better informed. They should check things out before they take them hook, line and sinker.”