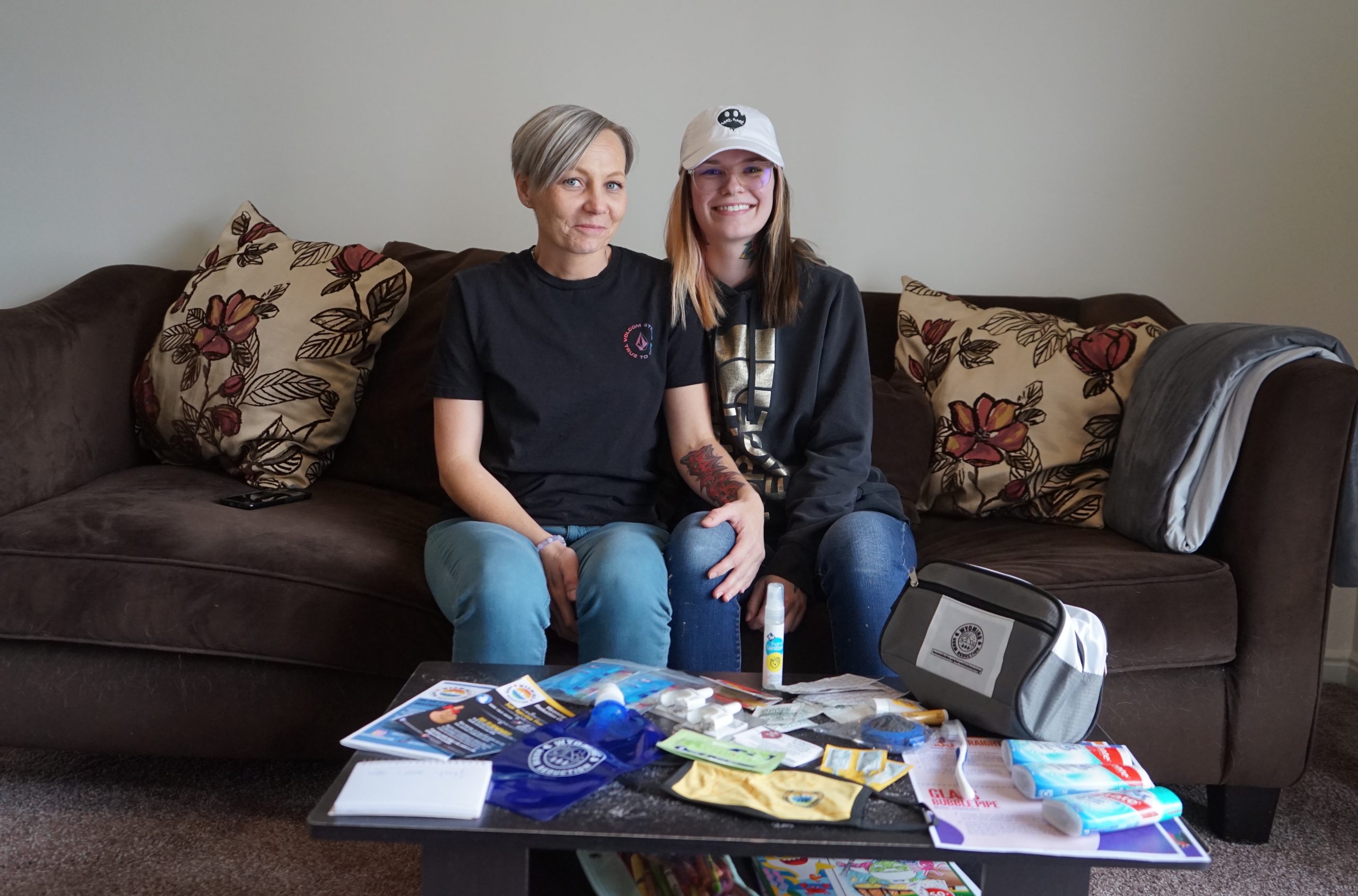 Camille Montoya and Samantha Sanders spread information about safe drug use, do community outreach and put together kits for those who use drugs in their community. (Sofia Jeremias/WyoFile)

Overdose deaths are rising in Wyoming, but the path to reducing impacts is littered with challenges — from accessing overdose-reversing drugs to patching prevention-funding gaps.

Sanders designed a handout explaining signs of drug overdose, she tells the group, and wants to distribute it in bars around town. Maybe it’s something they could get in local schools, Montoya chimes in.

The group contemplates legislative sponsorship, wondering if getting a bill on next session’s docket should be a priority, even if Wyoming may not be ready for more progressive drug policies.

Each member of the eight-person group, which is dispersed across the state, has been impacted by substance use in some way.

Montoya’s husband suffered from severe opioid-use disorder, but got sober after moving to Rock Springs. Then a doctor prescribed her partner Adderall, which he began to abuse, she said.

Resources were limited. “I was reaching out every day, all the time asking ‘where can I get him help?’” Montoya said.

She was told to kick him out of the house, to force his rock bottom, she said. “I didn’t know what else to do.” Montoya’s husband stayed. Soon, however, he died by suicide, she said.

In the wake of her loss, Montoya threw herself into the work of harm reduction, which aims to “reduce the negative personal and public health impacts of behavior associated with alcohol and other substance use at both the individual and community levels,” according to the Substance Abuse and Mental Health Services Administration.

Members of Wyoming’s collective hand out the overdose-reversing drug Narcan in strip clubs, bars and smoke shops. They are trained in rapid HIV and HCV testing. Alex Sessums, a Rock Springs member, gives out her phone number to any one who asks. “People will call me at any time day or night,” she said.

The ambitions of the small, relatively nascent group are far-reaching: It wants to change state law and save lives of people who use drugs in Wyoming while contending with a culture that doesn’t always believe in the value of those efforts.

It represents just one cog of a larger statewide system working to reduce drug overdoses and opioid impacts — other entities include Wyoming Department of Health, law enforcement agencies and nonprofits like Recover Wyoming. However, state laws, lapses of federal grants, geography and stigma stymie implementation of some of the tools addiction experts say are most effective — from syringe-exchange programs to methadone clinics.

The issue is made more complicated by the rise of fentanyl, which is helping drive an increase in overdose deaths in Wyoming and across the nation.

“The numbers are increasing, and it’s very concerning,” said Casey Patterson, a Wyoming-based drug intelligence officer working with the federal government to monitor opioids across the Rocky Mountain region. Along with monitoring, Patterson works with a public health analyst to examine trends, track overdose death spikes and ultimately bring rates down. He also participates in various work groups like one focusing on naloxone distribution in jails.

“The opioid overdose deaths are really being driven by fentanyl,” said Rodney Wambeam, Wyoming Survey & Analysis Center senior research scientist and co-author of the “Telling the Story of Opioid Use in Wyoming” report.

In 2019 there were 11 reported overdose deaths from fentanyl among Wyoming residents. In 2021 that number jumped more than 300% to 45, and seven deaths have been recorded in the first few months of 2022, per data requested from the Wyoming Department of Health. WDH has improved its ability to specify causes of overdose deaths over the years, a change that may be partially responsible for the increase in recorded fentanyl-related deaths.

Wyoming laws only stymie efforts to reduce drug-use impacts, many say, and are outdated compared to reforms passed in other Mountain West states.

“We’re just in the dark ages in Wyoming,” noted Sessums with the Harm Reduction Collective.

Wyoming is one of just three states without a Good Samaritan Law providing some immunity for those who call 911 during an overdose. “People are dying because people are afraid to call 911,” Patterson said. He hopes to collect better data on just how many people in Wyoming are impacted by the policy.

“There are some prevention things that really you can’t do in Wyoming,” Wambeam with WYSAC said.

The legality of fentanyl test strips is another source of confusion that some say further complicates efforts.

The strips can detect the presence of fentanyl in other drugs, such as powdered cocaine or pills. Advocates point to studies showing the inexpensive strips can change the behavior of users, leading some to discard substances, use with a friend or keep naloxone on hand.

State statute does not explicitly outlaw possession of them. The test strips, which cost roughly a dollar, can be purchased with federal funds from the Centers for Disease Control and SAMHSA, but they haven’t been widely distributed in Wyoming, and do remain illegal in many states.

In the meantime, law enforcement continues to seize illicit fentanyl. In 2019, Wyoming Highway Patrol made the biggest drug bust in two decades, which included a kilogram of synthetic fentanyl.

Access to the overdose-reversing drug naloxone is another challenge many harm-reduction groups face.

Naloxone has become an important tool for police officers across the state.

Groups like the Wyoming Harm Reduction Collective fundraise or use their own money to purchase doses of the life-saving medication — a single dose of generic naloxone costs around $20-$60, while brand-name Narcan costs up to $140. The Rock Springs group recently ran out of naloxone completely and is searching for ways to purchase more.

“Naloxone is super hard to get here,” said Hailey Hayden, the project case manager for LEAD — a diversion program run out of the Cheyenne Police Department aimed at connecting individuals who commit low-level crimes with resources. Hayden implemented a program allowing LEAD participants to go to a local pharmacy and obtain two doses for free, but the grant supporting that program also ended.

“I was just kind of pulling my hair out trying to think of creative ways [to get naloxone],” said Patterson, who worked as a Cheyenne Police Department detective before retiring in June. “If I could order a truckload of this stuff, at least we would have it somewhere. I wasn’t able to figure out a way to get it.”

Recover Wyoming’s Cheyenne headquarters keeps Narcan behind the counter, handing it out to anyone at risk or related to someone at risk of overdosing. The nonprofit, which connects people with resources and peer-to-peer support, has a standing order through Cheyenne Regional Medical Center.

“I saw on Facebook today, someone else said that their good friend just died from a fentanyl overdose,” Recover Wyoming’s Executive Director Lana Mahoney said. “It continues to be a problem.”

The department also still provides funding to county prevention specialists through the Community Prevention Grant. These programs focus on a broad array of objectives from suicide prevention to tobacco cessation, and some ongoing programs include drug take-back days and awareness campaigns.

Hayden’s work ranges from helping someone get a pair of glasses to in-patient substance abuse treatment center placement to applying for emergency rental assistance programs. Her cellphone’s ringer is turned up just loud enough to catch the 24/7 texts and phone calls.

Placing clients in Wyoming’s in-patient treatment centers is one of the most difficult parts of her job as the LEAD case project manager, she said.

When LEAD’s efforts aren’t enough, the consequences can be devastating.

After managing to stay clean for a month on his own, one client gave up and started using again, she said. That same day he’d made the top of a waitlist for a facility in Sheridan, but changed his mind about going.

“That is the worst part of my job,” Hayden said.

Other aspects, like securing spots for out-patient treatment or accessing therapists or medication without health insurance, can also be painful. “I put myself in their shoes and I personally would not want to wait three months just to get medication,” she said.

The state funds nine centers in Wyoming through the federal Opioid Response grant to provide buprenorphine and naltrexone, two medication-assisted treatments for opioid use disorders. However, there isn’t a single methadone clinic, meaning those who need that form of treatment must travel out of state.

“In Wyoming, there’s not a ton of recovery support services across the state. Some communities have more than others,” said Mahoney of Recover Wyoming. The Legislature in 2021 slashed the budget for community health centers providing substance abuse treatment by $7.5 million.

Finding residential treatment for women comes with another level of complication, Mahoney said. Only a handful of centers across the state accept kids, forcing mothers to decide between treatment or keeping their children settled in their community and school.

Roughly 30 people are utilizing the service currently, according to Recover Wyoming, but funding runs out in September.

Stigma and criminalization add more barriers to getting help. Mahoney has struggled with alcohol and stimulants, and was addicted to meth, a drug that initially helped her pull all night study sessions. While alcohol abuse is somewhat normalized, meth addiction is not. “A lot of people are afraid to get help,” she said. “They don’t want to lose their jobs, or have their kids taken away.”

The OneWyo Opioid Settlement, the state’s share of a national agreement with opioid distributors, is being finalized — all the required subdivisions, cities, towns and counties have signed on to the agreement unlocking the full settlement amount, according to Wyoming deputy attorney general Misha Westby. Millions of dollars are on the line, with 35% going to the state.

How those funds will be deployed remains a question.

“Specific decisions and plans have not yet been made,” WDH spokesperson Kim Deti wrote in an email. “We would expect settlement funding received to likely be used to support existing programs for substance abuse treatment and prevention.”

Reflecting on the federal grant used to purchase and distribute 8,000 doses of Narcan in Wyoming, WDH community prevention unit manager Rachel Nuss wrote in an email, “Although a lot of progress was made, due to low, widely dispersed population, infrastructure and capacity remain a challenge.”

Data collection and infrastructure used to identify areas highly impacted by drug overdoses need additional improvement too, Nuss wrote, and are a top priority for the state’s overdose response strategy.

“It takes a lot to build capacity in a frontier rural state,” Wambeam of WYSAC said.

Driven by the alienation and loneliness drug use spurs, they both know how small acts of care can add up, they said. These acts must suffice to fill gaps as statewide prevention efforts take shape.

In Rock Springs, Montoya and Sanders sign off from the Wyoming Harm Reduction Collective’s bi-weekly Zoom meeting and start to assemble kits with masks, condoms and pamphlets containing safe injection information. They include hand-written notes of encouragement.

Gesturing toward a stick of chapstick destined for the bags they’re assembling, Montoya said, “When I was running the streets, something like this would have meant a lot to me. Just even the damn chapstick.”