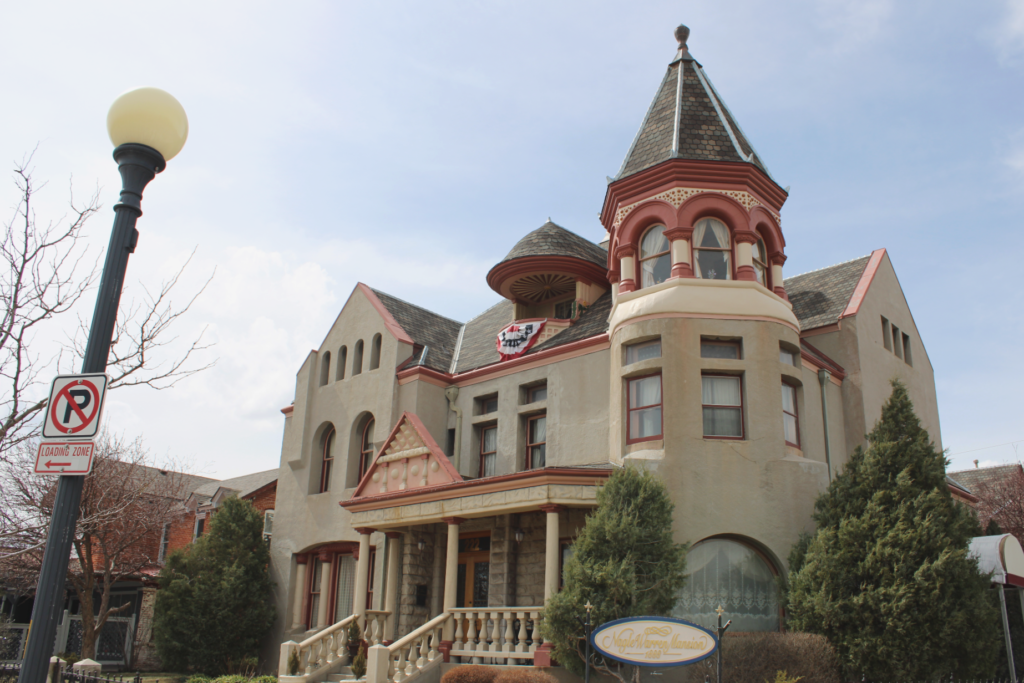 The Nagle Warren Mansion shines in the sun at 222 E. 17th St. in Cheyenne. Built in 1888, the building has hosted presidents and been the site of meetings that have directly shaped Cheyenne into what it is today. (Briar Napier/Cap City News)

Not on innkeeper Jas Barbe’s watch, at least. It’s too powerful of a building, too critical to Cheyenne and Wyoming’s history. Barbe himself likened the mansion, built in 1888, to a living, breathing thing that has its own personality.

“You ever seen the old ’80s movie ‘Christine’?” Barbe asked, referring to the horror film based on a Stephen King novel about a car that has a mind of its own. “It’s this. … She never lets me go. I’ll leave for an hour and [the mansion says], ‘Oh, you need to come back and do this.'”

But when Barbe talks about the building’s vast history, the stories become intoxicating. Presidents stayed the night. Exclusive parties were thrown for the elite and powerful. And the people who lived within its three stories, per Barbe, “built Cheyenne and Wyoming. Period.”

Soon, modern-day guests will get to live like those figures did — and with the setting to match.

The mansion, at 222 E. 17th St. in downtown Cheyenne, will reopen soon as a bed and breakfast, sparking new life after it’s closing in late 2019. Barbe has spent seven days a week, often up to 18 hours a day, renovating the residence to match near-perfectly what it looked like in the late 19th century.

A specific opening date is not yet set, as Barbe said he’s looking to fill staff roles. However, when everything finally falls into place, patrons will be greeted by Barbe and employees dressed in era-appropriate garb, served drinks and dishes that fit the time period, and go to bed that night in the same rooms some of Wyoming’s — and America’s — most powerful people slept in.

If it sounds like a trip back in time to 1888, Barbe emphasizes that’s the point.

“These are almost like having little museums in many ways,” Barbe, who has done similar projects across the U.S. and Europe, said about his work. “That’s what I tried to incorporate into here. I wanted people to have that submergible experience. What would it have been like inside this house in Cheyenne in 1888? Because outside, there is no remnant of what it looked like.

“I want you to feel like you’re set in 1888 when you’re sitting at that table there. I want that feeling. … Close the windows, turn on the phonograph, and you’re there.”

Former owner and innkeeper Jim Osterfoss operated the building as a bed and breakfast for over two decades leading to his retirement in 2019. Barbe, who started his career in Centennial over 50 years ago and had prior connections to the state, knew Osterfoss, and said he spoke with him a few months before his passing in January 2021.

Osterfoss left a family trust to his children, who didn’t want to see the building sold. Barbe reached out and expressed an interest in renovating the property at the first opportunity — he had a contract elsewhere that delayed him — with a commitment to restoring it to as closely to its past characteristics as possible.

Barbe is a massive part of the project, but he said he hasn’t been able to do it alone. There’s been nearly $500,000 poured into the renovation by the family, including a $6,000 flooring restoration that took two and a half months to complete and a piano in one of the main rooms that Barbe estimates will be worth $90,000 once a cabinet repair on it is finished.

“They didn’t even hesitate when we started talking about reopening this thing,” Barbe said of the family. “They said, ‘Cheyenne’s got to have that,’ and they’ve committed almost half a million dollars since into this. That’s commitment; they didn’t have to [do that]. They’ve could’ve just stuck a ‘For Sale’ sign on the front and just let it go.”

The historical figures that have stepped foot in the building warrant the attention to detail.

The mansion’s namesakes are Erasmus Nagle and Francis E. Warren, a powerful 19th-century businessman and Wyoming’s first governor, respectively. The list of American historical icons who lodged within the mansion’s walls as guests — Theodore Roosevelt, John J. Pershing and “Buffalo Bill” Cody, among many others — is even longer.

That adds to the challenge of modernizing the property while preserving its allure and attraction, Barbe said, as the mansion wasn’t built to be a hotel, but a home. Looking at the project from 360 degrees allows him to make the determinations on which directions to go with it toward opening day, he said.

“My early influences have long been dead,” Barbe said. “Here in the United States, honestly, there is less than a handful of hospitallers that do it what I consider to be the right way, and that’s really true guest services. … It’s like having a family here, that’s how I look at it. My guests are going to be the family that comes in.”

The mansion’s reopening will come in three phases, Barbe said. The first will be a private party for everyone that’s helped on the project, followed by what he said would be “more of the V.I.P.” people at the second one as he’ll invite Mayor Patrick Collins and Gov. Mark Gordon, among others. The final phase is the full opening to the public — with him and staff in full costume.

The day the mansion is ready to open, Barbe said he’ll know exactly the moment when he can come at ease. On the main floor, he’ll set Helen Smith’s, Warren’s wife’s, clock and begin playing music from the phonograph for the first time.

And when that clock begins ticking, Barbe can finally feel comfortable in saying the project is — at long last — complete.

“When that clock starts, it actually begins this whole thing,” Barbe remarked. “This is going to be like, ‘We’re ready,’ that’s how I’ll feel. We’re now ready. Open the door.”