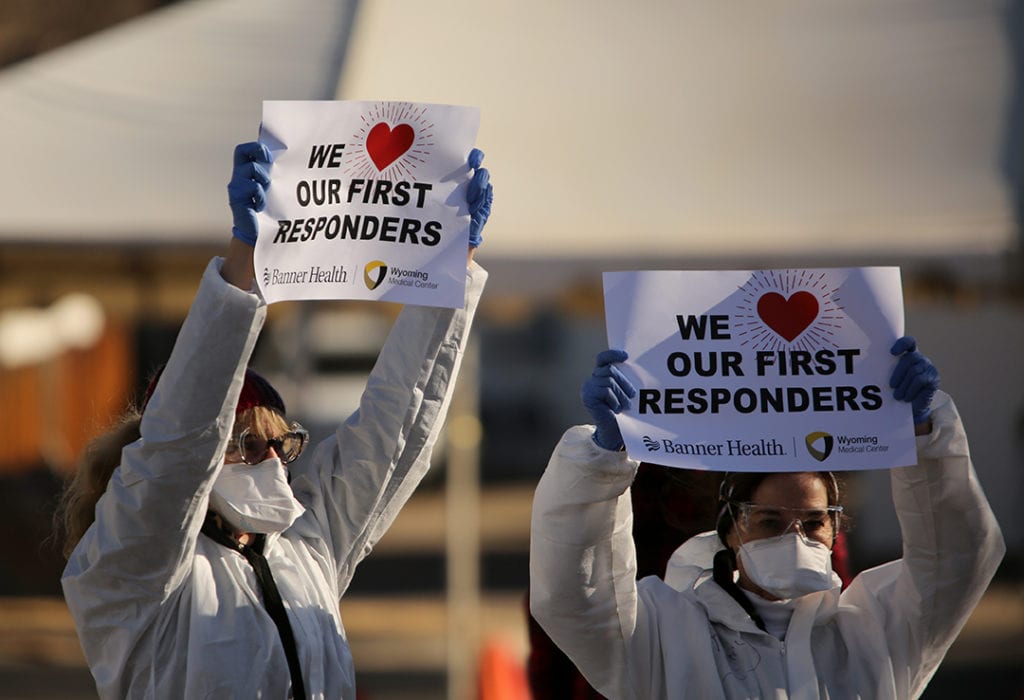 Healthcare workers at the Wyoming Medical Center Respiratory Screening Clinic wave to first responders from several Natrona County agencies during a brief parade around the WMC campus on Dec. 0, 2020, in Casper. The parade was organized to show appreciation for healthcare workers during the COVID-19 surge. (Dan Cepeda, Oil City File)

CASPER, Wyo. — Gov. Mark Gordon has ordered flags in Wyoming to be flown at half-staff starting immediately through sunset Monday, to honor the death of one million Americans from the COVID-19 pandemic.

According to a release issued Thursday morning, the order follows a direction from the Biden administration, which issued a proclamation marking the milestone.

COVID-19 has killed more than 999,000 people in the U.S. and at least 6.2 million people globally since it emerged in late 2019, according to figures compiled by Johns Hopkins University.

According to the CDC, Wyoming’s official death count from COVID-19 since the start of the pandemic stands at 1,817.

BY THE PRESIDENT OF THE UNITED STATES OF AMERICA

Today, we mark a tragic milestone: one million American lives lost
to COVID-19. One million empty chairs around the dinner
table. Each an irreplaceable loss. Each leaving behind a family,
a community, and a Nation forever changed because of this
pandemic. Jill and I pray for each of them.

As a Nation, we must not grow numb to such sorrow. To heal, we
must remember. We must remain vigilant against this pandemic and
do everything we can to save as many lives as possible. In
remembrance, let us draw strength from each other as fellow
Americans. For while we have been humbled, we never give up. We
can and will do this together as the United States of America.

In memory of the one million American lives lost to COVID-19 and
their loved ones left behind, I hereby order, by the authority
vested in me by the Constitution and laws of the United States,
that the flag of the United States shall be flown at half-staff at
the White House and on all public buildings and grounds, at all
military posts and naval stations, and on all naval vessels of the
Federal Government in the District of Columbia and throughout the
United States and its Territories and possessions until sunset May
16, 2022. I also direct that the flag shall be flown at half-staff
for the same period at all United States embassies, legations,
consular offices, and other facilities abroad, including all
military facilities and naval vessels and stations.

IN WITNESS WHEREOF, I have hereunto set my hand this twelfth day of
May, in the year of our Lord two thousand twenty-two, and of the
Independence of the United States of America the two hundred and
forty-sixth.