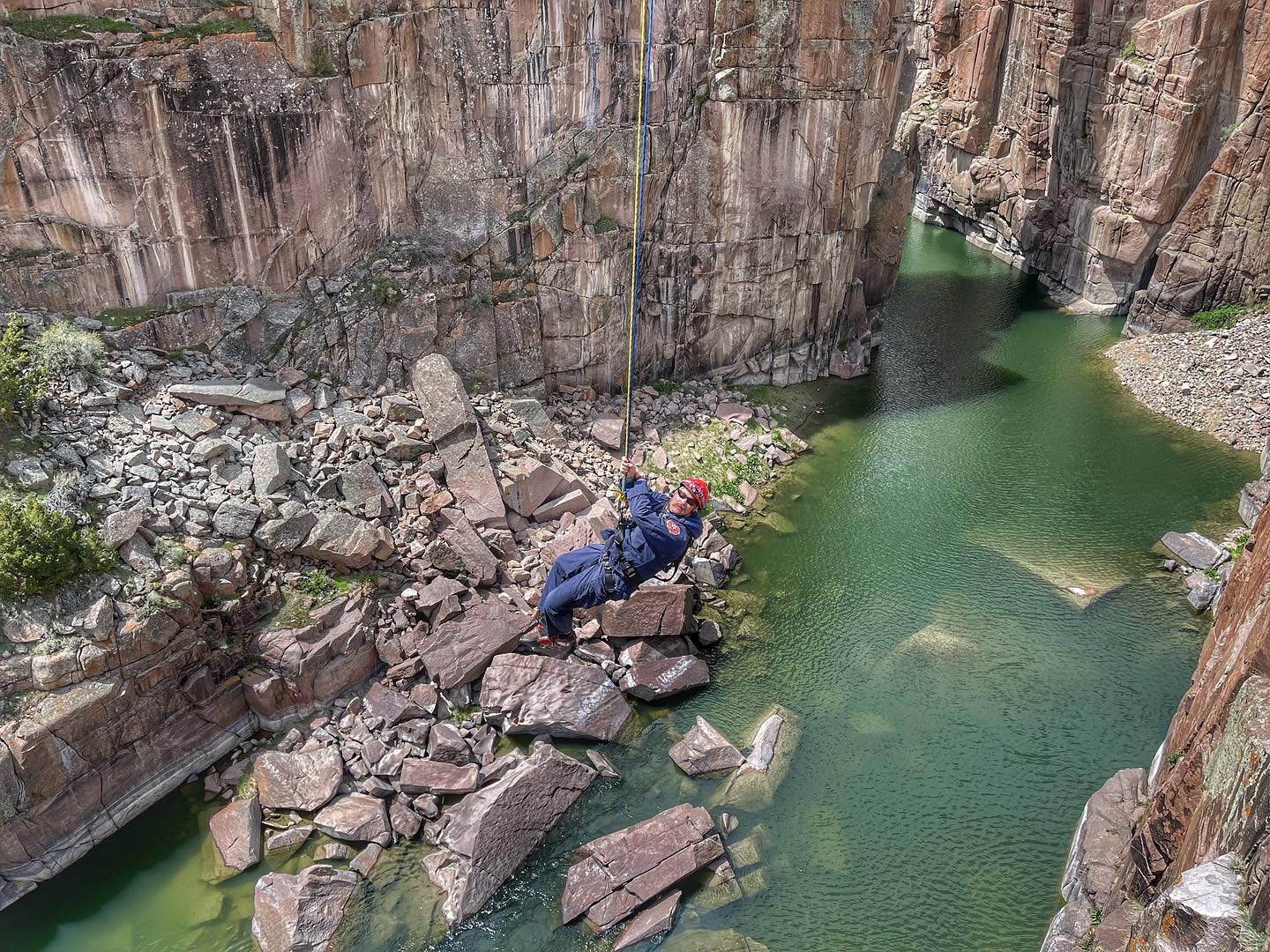 CASPER, Wyo. — Members of Casper’s rescue training company, Peak Rescue, made up of local professional first responders, hosted the second High Plains Fire Conference this weekend, putting over a hundred firefighters from across the nation through complex rescue scenarios developed through career experience.

“We’re mixing it up, making it a little harder for them,” firefighter and Peak Rescue founder Micah Rush told Oil City at the start of the conference Friday. Rush said some of the scenarios this year are inspired by his team’s participation in GRIMP competitions internationally, in which small teams are tested in complex rescue scenarios. They won the 2022 CMC GRIMP North America event, a competition that took place entirely on board a battleship, in Los Angeles this March.

One of this weekend’s scenarios involved rescue and transport within “super-confined” spaces. On the other hand, teams also took part in a high line rope scenario over Fremont Canyon, with rescuers dropping 200 feet to access the patient.

Other scenarios involved hooking up fire hoses to standpipe at the Wolcott parking garage, vertical ventilation at the Metro Road regional training facility, and vehicle extrication at ENF Towing.

The last of these was run by Wichita Fire Rescue’s Isaac Frazier.

“We run everything from basic door pops to freeing people from dashes, side-resting cars, upside-down, people under cars, [and] motorcycles under cars,” Frazier said.

Frazier teaches extrications across the country, having spent 15 years as a special operations captain in St. John’s County, Florida, including “the deadliest stretch of highway in the country for years and years.”

“Everything we do is high-speed, real-world, and street-applicable,” Frazier said. “It’s all based off experience.”

“Micah Rush is like the best in the world, and he’s right here in Casper,” Royce Perkins told Oil City. Royce and his team work for Sinclair Refinery as industrial rescue specialists. They ran a scenario at Peak Rescue on Sunday where teams extracted the victim from the bottom of a cylindrical structure simulating a grain silo or distillation tower.

The weekend kicked off with lectures by fire chief Scott Thompson and assistant fire chief Dave McGrail, both of whom wrote books on firehouse leadership and culture. The lectures set the tone for the conference by asking participants to reflect on the culture of their departments and take consistent action toward building and serving a cohesive mission.

“Personally speaking, I think we’re trying to build camaraderie between some of these other departments from different states and the region,” Sheridan Fire Rescue Captain Andy Fried told Oil City after the lectures. “We’re trying to make our own departments better and have this conversation about how to protect the citizens that we have the duty to protect.”