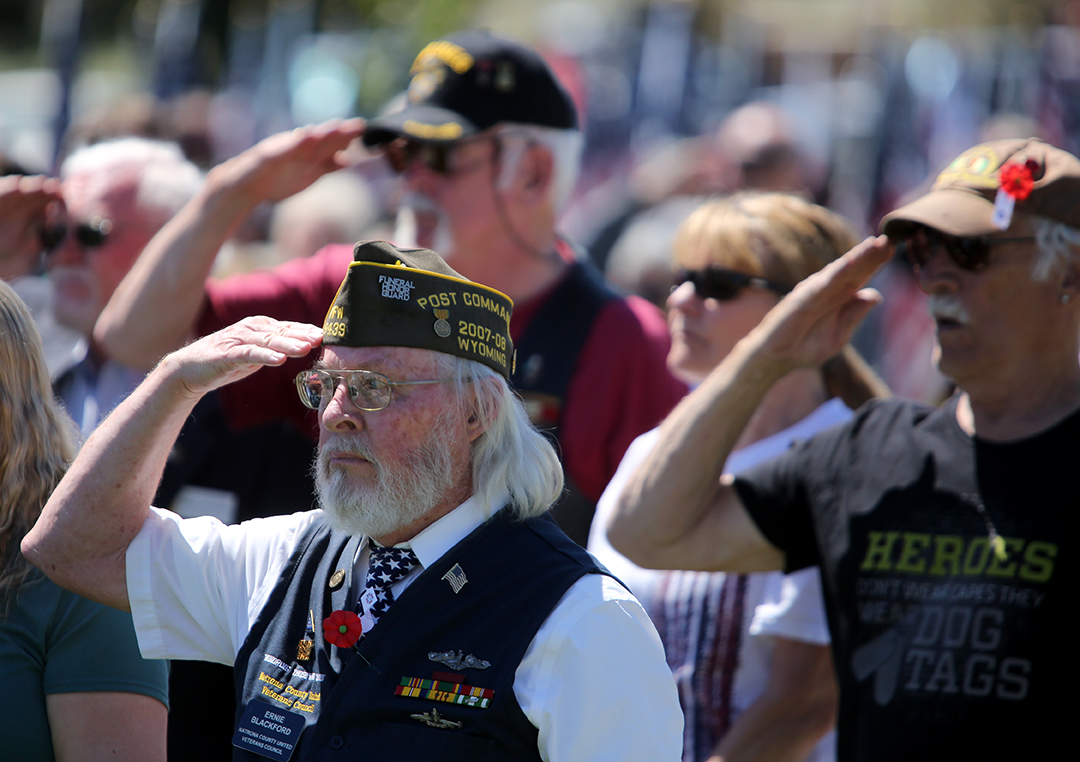 Veterans and civilians stand for the National Anthem during a Memorial Day ceremony at the Oregon Trail State Veterans Cemetery in Evansville on Monday, May 31, 2021. The ceremony, usually held inside the chapel, took place in the grass on the south lawn. (Dan Cepeda, Oil City)

Meanwhile, the Casper Mountain Young Marines are raising money to help lay roses on veterans graves and the American Legion’s Casper Legion Post is accepting donations of small U.S. flags or money to purchase the small flags to plant at veterans’ grave sites for Memorial Day.

“So far, we have raised $1,400, about $300 shy of being able to have 2,000 roses just from the Young Marines,” Vincent Fernandez, unit commander for the Casper Mountain Young Marines, said Monday.

The goal is to raise enough money to lay 4,200 roses on the graves of the veterans buried in Oregon Trail Veterans Cemetery. Fernandez noted that veterans organizations may also be planning to lay roses at veterans’ graves for Memorial Day.

When the Young Marines go out to lay the roses on veterans’ graves, they will begin by saying the name of the veteran out loud and thanking them for their service. If families or organizations have already laid a rose at a grave, the Young Marines will pay their respects and reserve their roses for other graves, according to Fernandez.

“It is a great opportunity for the kids to be able to show appreciation for the veterans who have gone before them,” Fernandez said. “I know one of the Young Marines’s grandfathers is buried there.”

In years past, there haven’t been enough roses to place one on the grave of every veteran at the Oregon Trail Veterans Cemetery, according to Fernandez. Should there be enough roses this year, any extra would be placed on veterans’ graves at the Highland Cemetery or the Memorial Gardens Cemetery.

The Casper Legion Post will put small flags at the known graves of veterans at Highland Park and Memorial Gardens if it has enough flags, according to Post Adjutant Dean Welch. People can donate the small flags or money to help buy the flags by calling Dean at 307-258-9120. The flags will be placed on Saturday, May 28 ahead of the Memorial Day ceremony on Monday, May 30.

The Natrona County United Veterans Council — which includes members of Veterans of Foreign Wars posts in Casper, the American Legion, the Marine Corps League, Disabled American Veterans, and the VA and ROTC units from Natrona County and Kelly Walsh High School — has set the schedule for the Memorial Day ceremony.

The ceremony is scheduled to begin at 11 a.m. Monday, May 30 at the Oregon Trail Veterans Cemetery. The program for the Memorial Day Ceremony is as follows: