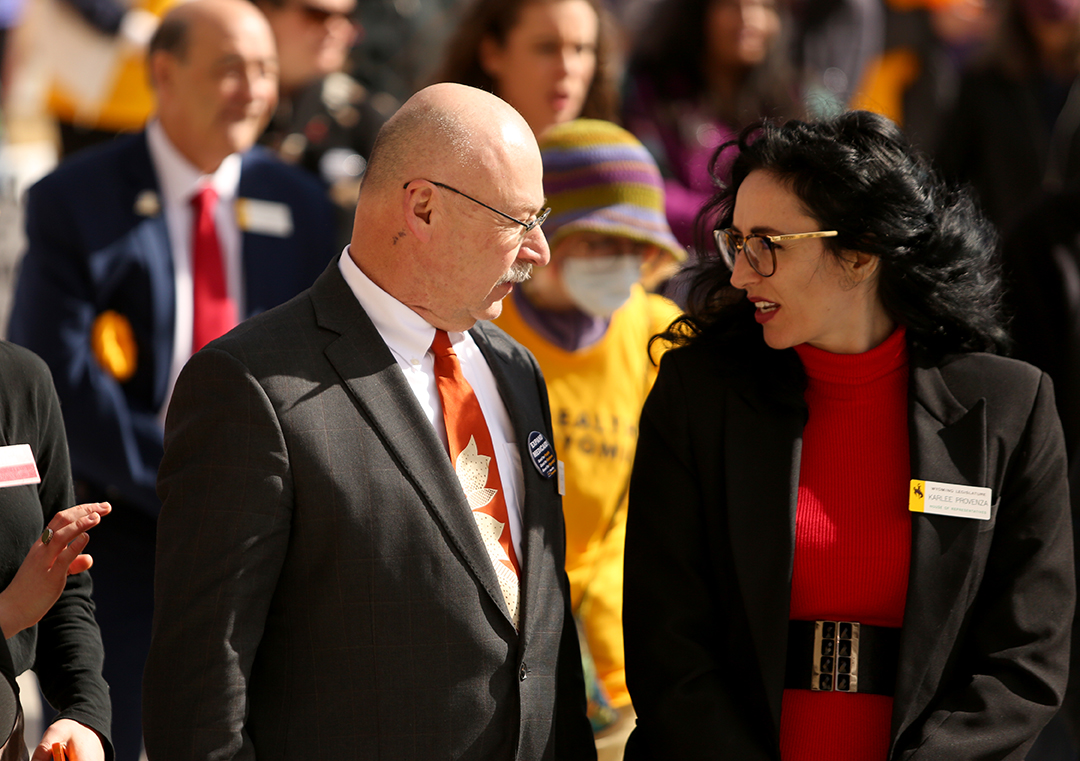 The Fremont County Republican Party voted to censure Sen. Cale Case (R-Lander) last Monday, citing his support for Medicaid expansion and a recent op-ed written by the lawmaker, among other things.

“Wyoming State Senator [Case] consistently speaks and acts in [sic] contrary to the will and consent of the governed and the Wyoming Republican party platform,” according to the resolution.

Wyoming Republicans have increased their use of the censure since 2020 — most notably as a response to U.S. Rep. Liz Cheney’s (R-Wyoming) vote to impeach former President Donald Trump. Party censure is a largely symbolic act that does not involve any material punishment such as removal from office or loss of authority. Instead, it’s a resolution expressing formal disapproval when no other recourse is available.

The Wyoming Republican Party uses “censure and RINO-labeling of any dissenting viewpoint” to keep a “narrow focus alive,” Case wrote in an op-ed for Cowboy State Daily. The fact that he was censured shortly after the piece was published has only proven the point he was trying to make, Case told WyoFile.

“What else can they do? They can’t send me to bed without my dinner,” Case said.

The county party’s officials voted 11-7 in favor of censuring Case.

“A resolution of censure brings out the grumblings that are going on behind the scenes,” Republican and former legislator Marti Halverson told WyoFile.

In 2020, Halverson wrote an op-ed in support of the state GOP party censuring JoAnn True, at the time a state GOP committeewoman for Natrona County. It was the first censure by the party in several years and, according to True, it marked the first censure of a woman in the history of the State of Wyoming.

True’s censure was due to her role in founding a political action committee meant to increase female representation in office regardless of party affiliation. Like other non-partisan PACS, Cowgirl Run Fund gives money to both Democratic and Republican candidates. Despite the censure, True has remained politically involved and encourages others to do the same.

“The average Republican needs to get involved or back involved in the precinct level partisan politics,” she said.

Before 2020, one of the last times the party censured one of its own members was 2014. At that time, Republican Gov. Matt Mead was censured by several county GOP parties for signing a piece of legislation that stripped then-Superintendent of Public Instruction Cindy Hill of most of her powers. Despite the censure, Mead went on to win both the primary and general elections for his second term later that year.

While such resolutions have since become more frequent — Case’s being the most recent — they don’t have much effect on voters, according to Jim King, a professor in political science at the University of Wyoming.

“It might be part of the ‘drip, drip, drip’ that erodes candidate support, but in itself, the censure is not going to carry much weight,” King said.

It certainly doesn’t look good for a candidate, he said, but voters may not take much of a cue from party leadership. Most voters will have already formed an opinion for or against the target of a censure by the time a political party takes action, according to King.

In the case of Cheney, King said her many censures are indicative of the GOP’s move away from President Ronald Reagan’s gospel against speaking ill of other Republicans.

“I think this is just one more part of that shift in the way the Republican Party is operating internally,” he said.

Whether those censures reflect the minds of most voters will come to light in August, when Cheney faces a Trump-backed challenger and others in the 2022 primary election.

“This censure is not a tactic. It’s not bullying,” Steve Lynn, a precinct committeeman in Pavillion, said during Monday’s Fremont County Central Committee meeting.

“There is room in our tent,” Lynn said, but the party could not be “everything to everyone.”

While not a constituent of Case’s, Lynn brought the censure because he said it was his “duty to call to account” Case’s actions, like supporting Medicaid expansion.

The program is government overreach, according to Lynn, and therefore unconstitutional. Case rebutted that idea and stood by his stance. He also pointed to a poll from October of last year that found almost two-thirds of Wyoming residents support Medicaid expansion. When broken down by party, 58% of Republicans were in support as were 98% of Democrats and 64% of independents.

The censure also took issue with the character reference Case provided during a sentencing hearing for a former county official who was convicted of embezzlement. Everyone is entitled to a defense, Case said in response.

“This entire country is a wreck on account of the conga line of RINO Republicans that we have in our midst,” John Pennington of Shoshoni said in support of the censure.

Not everyone who spoke at the meeting echoed Pennington and Lynn.

“If you’re serious about [this censure], I want to go down with Cale. I would be honored to be censured,” former secretary for the Fremont County GOP Jim Hellyer said.

“The Wyoming Republican Party has a long-term goal of using punitive measures to lessen the impact of thoughtful, well rounded dissent,” Hellyer wrote in an op-ed in April.

Case urged the body to reject the censure, but said no matter what he planned to “keep going because I believe in what I’m doing.”

“I stand tall, and the people in my district are going to decide whether I need to be thrown out or not,” he said.

Case is up for re-election this year. He intends to run.