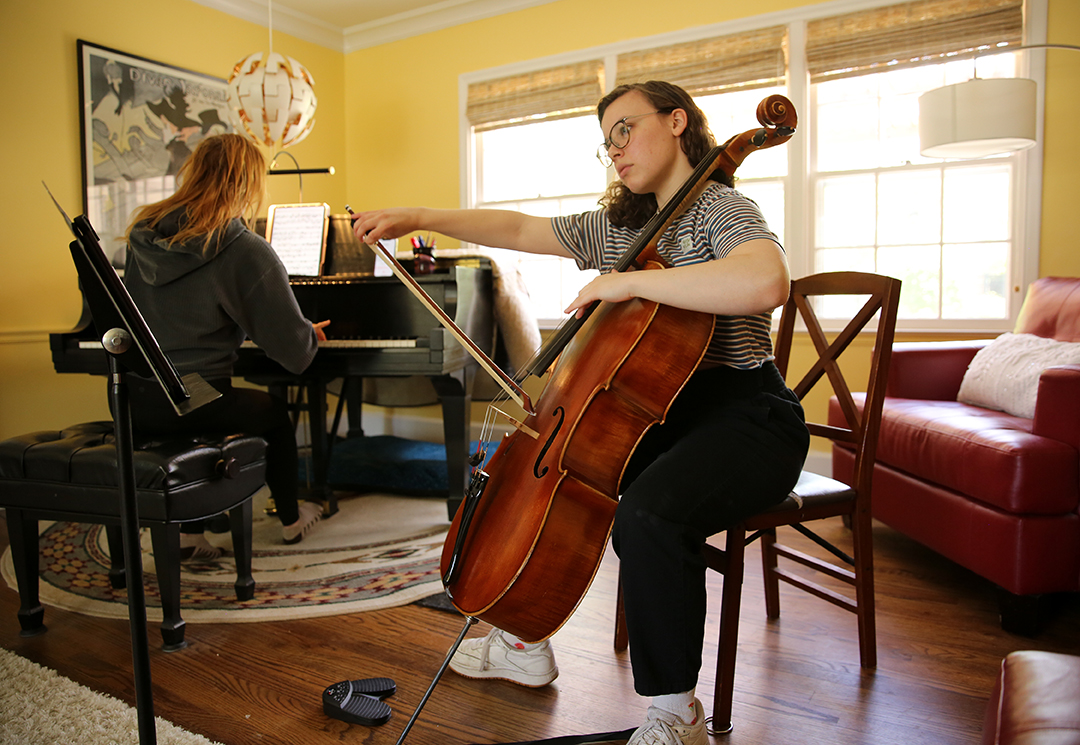 CASPER, Wyo. — Harry Potter and classical music aren’t often brought up in the same conversation, but Casper cellist Alexis DePaolo argues there are certain comparable factors when it comes to choosing the right instrument.

“It’s kind of like wand shopping,” she said. “It’s very Harry Potter — you just have to go out and try a bunch of instruments.”

Alexis is ready to make that next step with her instrument, though a layman would have trouble figuring that out considering the powerful, warm sound she and her current cello made this week while practicing in pianist Susan Stubson’s living room.

The two are preparing for a recital this weekend that is intended to help the young musician replace the trusty student cello she’s had since age 14 with a professional instrument.

The upgrade in tone and playability of a quality instrument is essential for a top musician entering the competitive world of classical music.

Her student cello is machine-made from blanks, and was heavily modified to produce better sound before she bought it. “I think we bought it for like six or seven grand, which is a lot of money already, but that’s usually the typical price for a beginner, full-size instrument,” she said.

The next instrument will be completely hand-crafted by a master craftsman with fine wood and materials that will ultimately allow Alexis to produce a sound that top orchestras and music schools expect.

“For a professional musician, your instrument is your vehicle,” said Susan, sitting at the small Steinway grand she uses at home. “It’s your professional tool.”

“A high-grade professional instrument makes all the difference in the world,” she added. “She’s going to be doing auditions for orchestras; it’s not a luxury item, it’s necessity.”

The recital on Sunday will allow Alexis to showcase her talent, raise awareness for the fundraiser, and give her a challenge while on break from studying at the prestigious Jacobs School of Music in Bloomington, Indiana. It’s a rare bit of downtime for the busy musician, who in a couple of weeks will head to her internship at the world-famous Grand Teton Music Festival before returning to Indiana to start her junior year of music studies.

“My family around here doesn’t really get to hear me that often in person because I’m at school,” she said. “My grandma’s going to be in town, and she lives in Oregon, so I just thought it would be nice to put together something.”

During the roughly 30-minute recital on Sunday, Alexis will play two pieces, with Susan on piano, as well as some unaccompanied pieces for cello. The atmosphere will be low-key and casual, she said.

Alexis recently performed in Casper after winning the 2022 WSO’s Young Artist Competition, which allowed her to perform a full piece with the Wyoming Symphony Orchestra. Her parents, Gary and Jennifer, are both members of the orchestra and prominent music educators in Casper.

Susan has been performing with Alexis’s parents for years, and has watched Alexis evolve from a toddler sawing away on a child’s instrument into an accomplished musician.

“It’s been really fun to see Alexis grow not just into a young artist, but I think the next step is for her to be an artist,” she said. “So she’s right on the precipice of that. It’s super fun to collaborate with her.”

Alexis’s accomplishments are already enviable, having been accepted in the first place to the Jacobs School of Music, which chooses its limited number of students by their auditions.

In the future, Alexis hopes to land a prime spot in an orchestra, a process she knows will be extraordinarily competitive and demanding.

While she says the idea of a good orchestra having a specific and characteristic sound is a bit “old fashioned,” she still dreams of certain gigs. “Everybody says this, but I know the string sound of the Berlin Philharmonic is the gold standard,” she said, “but I’ve really enjoyed listening to the San Francisco Symphony recently.”

“Honestly, I think people take so many auditions,” she said. “Even if you’re an amazing musician, some people take like 20 auditions. So really, I just want to win an audition eventually.”

Alexis DePaolo’s Cello Recital is Sunday, June 5 at 3 p.m. at the Nicolaysen Art Museum, with a reception following at Backwards Distillery. Admission is a suggested donation of $10. Her GoFundMe page can be found here.