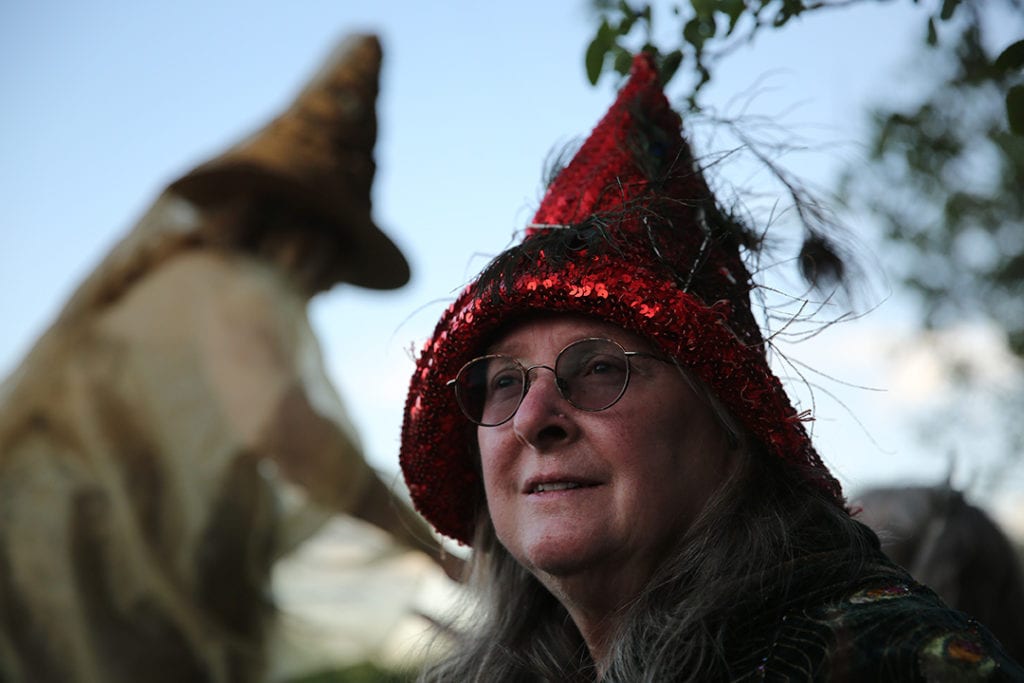 Rebecca Weaver Hunt has been the storyteller at Summer Solstice celebrations at Crimson Dawn for 31 years. (Dan Cepeda, Oil City)

Rebecca Weaver Hunt, PhD, has been the event’s storyteller for 31 years and will again bring the Crimson Dawn characters created by Neal Forsling to life during Tuesday’s summer solstice celebration.

Hunt has had a lifelong relationship with Crimson Dawn — the Midsummer’s Eve celebrations even played a role in her parents getting married. One of the traditions on the solstice is for people to throw red dirt on a bonfire and make a wish.

“They make a wish and the theory is that one person that makes a wish is going to get their wish,” Hunt said.

When her father, Warren Weaver, threw dirt on the bonfire in 1951, he wished for a wife. A week later, Warren and Hunt’s mother, Sara, were married.

Hunt attended her first Midsummer’s Eve celebration when she was 10 months old.

“I was always there as a kid,” Hunt said. “I was different characters at different times helping out.”

When Hunt moved back to Casper from Denver in the 1980s, Forsling’s elder daughter Mary approached her about possibly becoming the storyteller for the event.

“She started saying to me, ‘Why don’t you walk with me? You’ll be kind of my study and influence,'” Hunt recalled.

Hunt gradually started telling more and more of the stories under Mary’s guidance during her apprenticeship before fully taking over the role of storyteller in 1991. Hunt is now seeking someone she can train to become the next storyteller to keep the tradition alive.

“I’m trying to find someone who has a long history who really understands the meaning,” Hunt said.

Until an apprentice can be found, Hunt will remain the storyteller and is encouraging people to come participate in the celebration on Tuesday.

“We start at 7 o’clock, but it’s better to come earlier to get a place to park because you have to park on the East End Road and walk in,” Hunt said ahead of the celebration. “There’s only a little bit of parking close by for people who are mobility-limited.”

The Midsummer’s Eve celebration will begin with storytelling, followed by a walk through the woods. People will be portraying characters created by Forsling at each of the shrines on the Crimson Dawn property, and Hunt will help tell the story of those characters.

“We go in a big loop and walk the trail and then we go up on the Red Butte — and the head of the witches and the blind minstrel are on the top of the Red Butte,” Hunt said.

From there, participants will walk over to a grave site where Neal and Jim Forsling and other members of the family are buried. The bonfire will take place after that, weather permitting.

Hunt knows the stories not only about Forsling’s characters but also the history of Crimson Dawn. An example is the story behind one of the shrines Forsling created on the property.

“The first summer that Neal and her daughter spent up here in 1929, they had two dogs,” Hunt said. “One of the sheep herders — because the sheep herders were running that whole property there — gave them a dog and then when the dog died Neal buried him in the woods.”

“Sort of in the idea of an English or old Virginia little cemetery for your pets — she created that. So there’s all these graves and other mountain people have brought their pets and buried them there. Most of my childhood pets are buried there.”

A metal statue of a black German shepherd made out of 55-gallon oil drums created by Hunt’s father is located at the shrine.

Another shrine at Crimson Dawn is called “Shrine of the Good Brother.”

“One of Neal’s brothers died young, in his 40s,” Hunt said. “She would take stones when she was feeling sad and put them out in the woods and pile up these little cairns of stones around the trees. Every time she took out a stone, it was a way of sitting down and connecting. The idea was you’re supposed to think about the good stuff, not just the sad stuff.

“Neal’s grandson Dave has for years been the person who is in that shrine carrying on that family tradition.”

With the characters Forsling created including witches, Hunt said the annual celebrations interest some people in the pagan community.

“When I describe Neal to people, I talk about her being a poet because in the ’20s she was writing and publishing poetry. I talk about her being an artist … and then I say she was an environmentalist. She organized in the ’20s a group called Spring Builders of America who would go into places and they’d find an old, abandoned spring, clean it up, get it flowing again.”

When Forsling donated the Crimson Dawn property to Natrona County in her will, it came on the condition that the area be kept natural, Hunt said.

“Not all land is meant to be developed or extracted from,” she added. “Some of it just needs to be there because it’s beautiful and it’ll help you recharge.”

Hunt said her relationship to Forsling’s stories and Crimson Dawn influenced her own path in life.

“It was not so much a particular character as it was the idea that creativity could change things — that being a writer, being a creative person, was a really big force,” she said. “I believe that a lot of what I’ve done with my life, including being a writer, was influenced by Neal very heavily.”

If people want to check out Crimson Dawn outside of the Midsummer’s Eve celebration, Hunt suggested they consider visiting it on a weekend.

“I’d say try to get up there on a weekend when the county actually pays for a person — extremely part-time — to keep the doors open,” she said. “Give yourself time to talk and hear the stories and follow the trail and read the stories. Look around you. But definitely spend time interacting with the land.”

As for the Midsummer’s Eve celebration, seven years away from its centennial anniversary, Hunt encouraged people to remember what is at its heart.