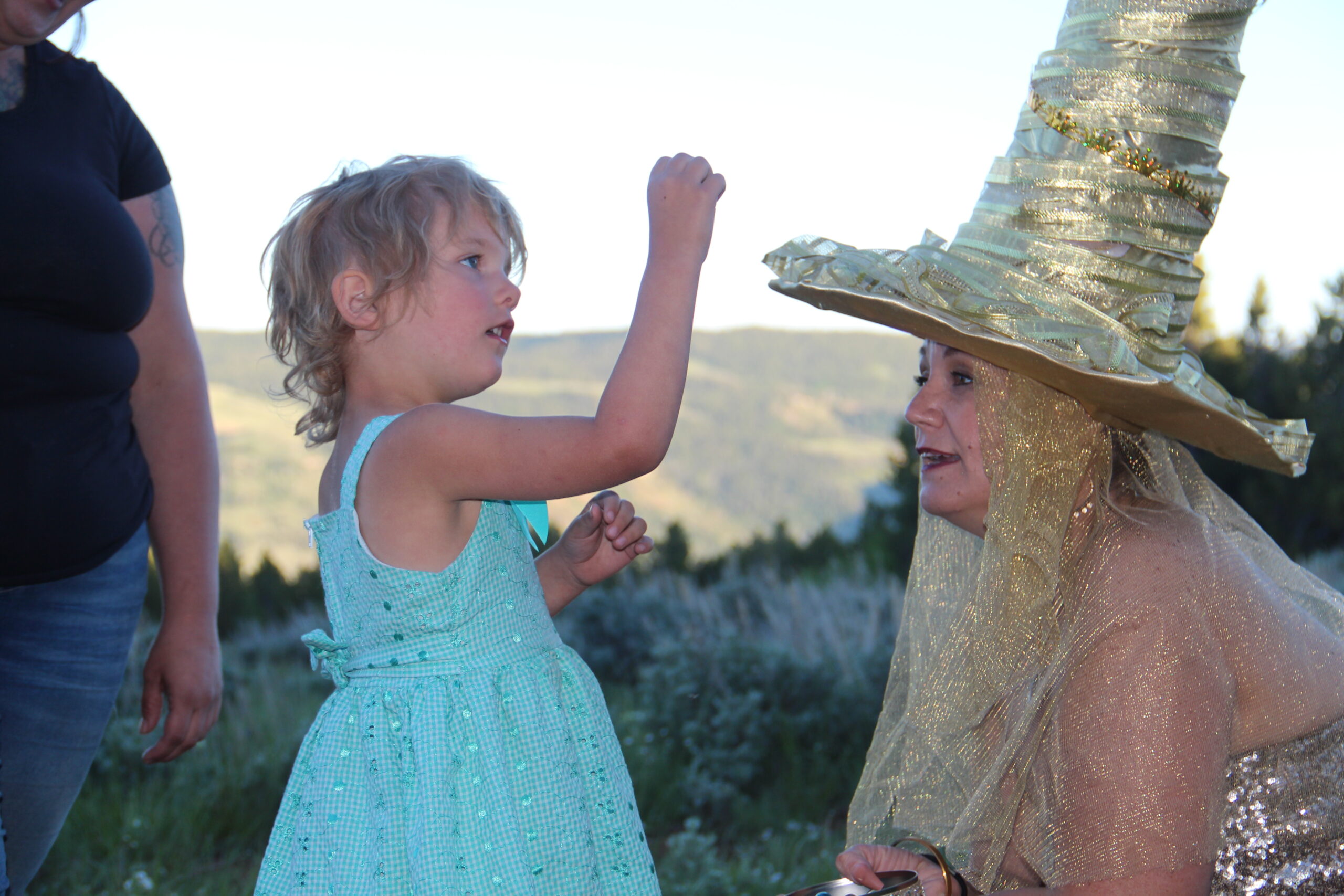 CASPER, Wyo. — Hundreds gathered Tuesday on Casper Mountain to celebrate the longest day of the year and the imaginative legacy of Neal Forsling, the homesteader and storyteller who built Crimson Dawn.

“Neal was a brave and independent woman who built a monument to her love of the area,” said Jessie Bell, who portrays the Black Witch, one of Neal’s enduring cast of characters.

The annual celebration began in 1931, and attending it is a tradition three or four generations deep for some families, according to Crimson Dawn Association Director Rebecca Hunt. She first attended the festival as a 10-month-old baby, and she’s carried on the lead storytelling role as Neal’s stand-in for 31 years.

Neal settled the one-room cabin off East End Road with daughters Mary and Jean. There wasn’t room for a lot of books, so they made up their own stories and characters. For the past 93 years they’ve come to life, waiting for visitors on the trail around the homestead at the shrines that Neal built.

They include the Phantom Woodchopper, who sings in the night while awaiting the next full moon, the only time he can be with his love, the Moon Maiden.

Then there’s the Topaz Witch, who gave the children magic gems to bury under moonlight to manifest kindness. The Star Witch dispensed magic dust for summoning the blessings of summer.

“This is my favorite night of the year,” said Morgan McGee, who portrays Undine, the Sea Witch stranded on Casper Mountain who makes gifts of seashells. Some of the same kids come back with the shells they got years earlier.

“I like watching the babies grow up,” McGee said.

Seeing the sense of wonder on children’s faces is the best part of the experience, said Dyann Durst, who has portrayed the Lavender Witch for 26 years.

Bell said Neal’s legacy is a fusion of art and nature, the shrines she built dedicated to many aspects of contemplative and everyday life. There’s the Heart’s Desire Well, the Shrine of the Good Brother, and the Dog Graveyard, where many Casper Mountain pets are buried.

“She had tragedy, but she built a fairy tale from her own imagination,” Bell said. “She built this as a place to contemplate, paint and celebrate life in this area that was a paradise for her.”

Hunt said Neal was a prolific creative, a Renaissance learner, and an environmentalist who worked on restoring old spring sites. She was also a founding member of the Casper Artists’ Guild and Theosophical Society of Casper.

Hunt, who has been working on a biography of Neal based on a 400-page memoir, said her work fits in the Transcendental tradition of American literature.

Some come dressed as Neal’s characters, or in a fantasy persona of their choosing.

“It’s not just the people, it’s the energy of this entire area,” said Brittney (Moon Rayn), who brought her children James and Autumn to the festival. “The vast amount of space. … You get up here and all your worries just wash away.”